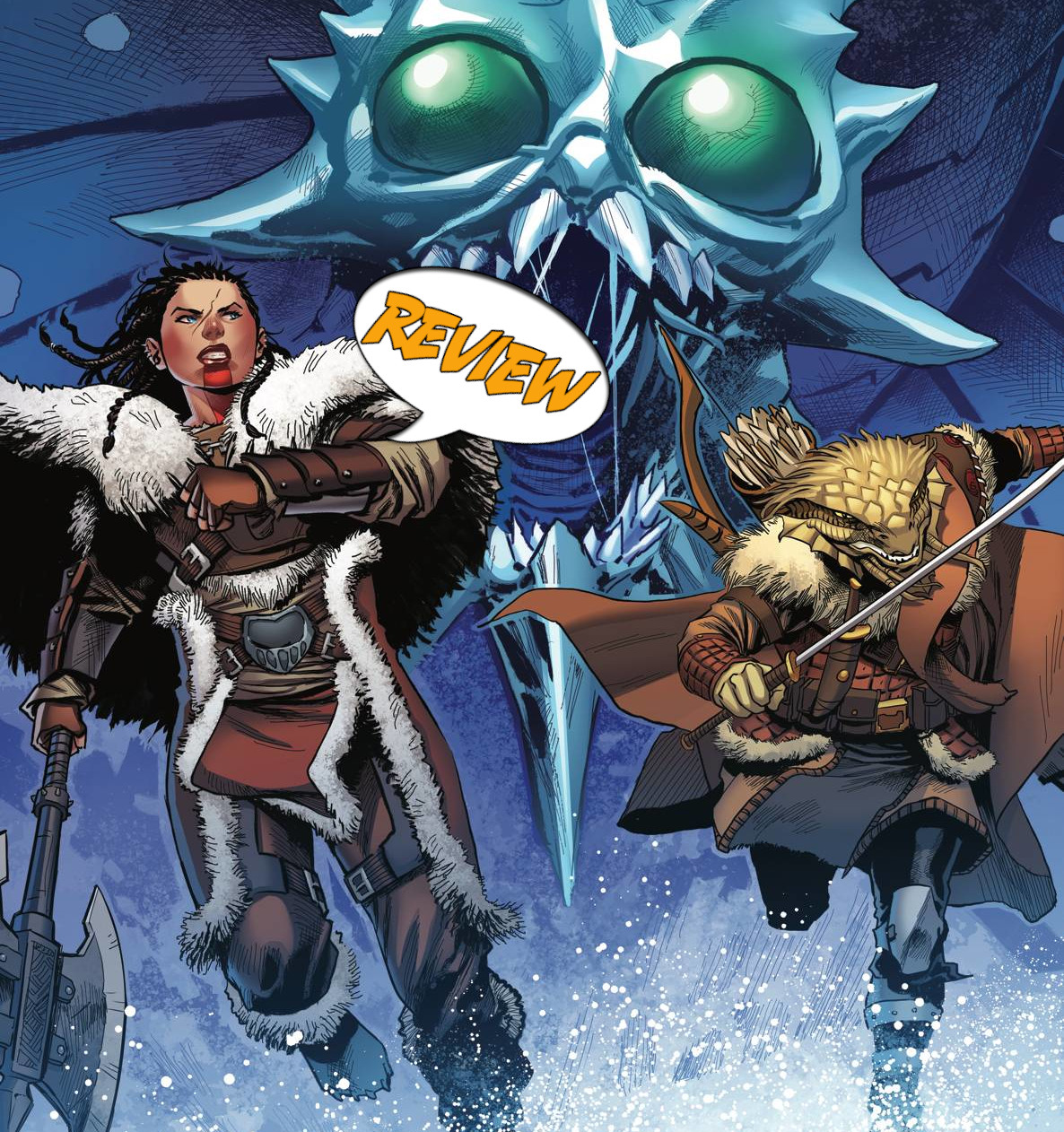 Dungeons and Dragons: At the Spine of the World #1 Review

A new adventure awaits us in the depths of Icewind Dale! Come see a new band of adventures come together in Dungeons and Dragons: At the Spine of the World #1 by IDW Publishing.

DUNGEONS AND DRAGONS: AT THE SPINE OF THE WORLD #1

Previously in Dungeons and Dragons: Wizards of the Coast has teamed up with IDW Publishing to bring you another miniseries! A never-ending winter’s night is driving a small town in Icewind Dale to the brink of insanity. A group of heroes are thrown together to fight an icy god and uncover an ancient primordial evil! Based on the popular tabletop game with a whole new cast of characters.

Amos, a warlock, is returning from a mining expedition in Icewind Dale. His product? The Cardalyn rock that can absorb a single spell and release it when the rock is destroyed. However, the mining team becomes enraged with each other and begins to fight each other over the rock. Amos, who is driving, loses control of the cart as his team kills each other. Later, Runa finds an injured Amos near the wreckage of his crew. Before long, they are attacked by a Remorhaz and the two team up to take it down.

When all looks bleak, the two are saved by Saarvin who shoots an arrow into the eye and kills the beast. The three then resolve to take Amos to a druid for healing in town. When they enter the tavern they encounter a bar fight with two people fighting over a piece of cardalyn. Meeting the druid, Belvyre, and his tiefling bodyguard, Patience, they stop the fight and head to Belvyre’s underground workshop. The party then resolves to look for the Enchanted Lost City to see if they can find a way to feed Ten Towns and end the winter night!

This book brings me back to playing Icewind Dale as a kid. The aesthetic of a fantasy group dealing with the more extreme climate of the tundra has always been interesting. Not only do you have the bad guy but you also have to fight the terrain and weather. So this book had me sold pretty early on. However, the comic lost a little bit of pacing when we entered the tavern. There was a lot going on with the introduction of Belvyre and Patience and a lot of names were being thrown around. Initially, I assumed that the Tiefling was this druid and quickly realized my mistake. Secondly, there is a lot of dialogue here that may be a turn off for some readers.

BOTTOM LINE: MY CUP OF TEA

The story is meant as a tie-in to the latest D&D adventure that was recently published. Usually, these tie-ins to large adventures don’t interest me at all and they tend to just be a publicity grab. However, the comics that Wizards of the Coast have published recently stand really well on their own. While I think the writing team struggled introducing the entire cast in one issue, the story has the foundation for a great adventure. My only gripe is that they are going to try to resolve this in only four issues! 4 out of 5 for me. Good writing, great art, and an overall good story.

Dungeons and Dragons: At the Spine of the World #1

Come check out Wizards of the Coast latest adventure as we explore Icewind Dale!