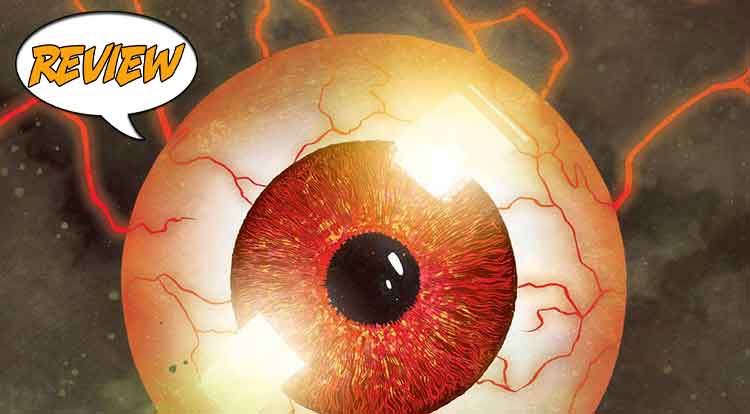 In The Red Mother #10, Daisy struggles to come to terms with the disappearance of Ian, and the mysterious visions that plague her of a monstrous Herald.  And are her friends really her friends, or people with an agenda all of their own?  Find out in your latest might Major Spoilers review!

Previously in The Red Mother:  Blinded in New York, Daisy has fled to Britain to put the pieces of her life back together.  But visions of the Red Mother haunt her, and at every turn, there are reminders of the attack.  Building a new group of friends, she meets Ian, who offers her a chance for a new beginning.  But the visions grow worse.  And then Ian vanishes.  And now a masked man is attempting to kill her…

LOOK AT ME DAMIEN.  IT’S ALL FOR YOU.

One of the things that makes The Omen such a powerful movie is the creeping sense of dread the audience feels when they realize that there are people moving around in the movie whose sole reason for being is to ensure the arrival into his power of the Anti-Christ.  Those who promote evil are endlessly fascinating to those too afraid to entertain the notion of embracing it themselves.  THE RED MOTHER #10 openly feeds on that fascination, as Daisy’s predicament worsens, and the people around her ostensibly, friends and colleagues, move out into the open with their true intentions.

Daisy’s predicament, as the shadow of something vast and terrible stalks her, is standard fodder for the horror genre.  Plucky young woman attempts to survive in the big city, while mysterious forces gather in the shadows to overwhelm her.  Think of Rosemary’s Baby to any of the 80s horror with a central female lead facing down an unstoppable evil.  And yet, in writer Jeremy Haun’s hands, there’s something refreshingly scary about THE RED MOTHER #10.

It’s possibly the nonchalance exhibited by those conspiring against Daisy that sends a chill up the spine.  Everyone is so nice, so accommodating towards her.  They have her best interests at heart, want her to succeed, and indeed, praise her successes.  If there’s an Academy Award for gaslighting, these guys would be carried on stage on the shoulders of their fans to accept the prize.  Daisy, assaulted with visions and nightmares, is completely oblivious to the nightmare that is about to crush her beneath its heel, and we, the reader, are all the better for it.

TIME IS ON THEIR SIDE

While Daisy’s fate has all the seeming inevitability of a slow motion car crash, Haun’s writing is more than matched by Danny Luckert’s artwork.  The sheer normalcy of how Daisy’s work colleagues and friends deal with her enables the horror, when it comes, to be even more stark.  Similarly, Luckert’s art, which strives mightily to present a normal world for Daisy to move around in, only accentuates the horror when it shows up.  There’s a real sense of time and place in the art – the normal rhythms of the city – it’s bustling streets, crowded shops, all plain and ordinary, only makes the presence of evil that much more shocking when it comes.

I was particularly taken by two sets of images in The Red Mother #10.  Near the end, where the conspirators gather is such an ordinary scene that it makes what they’re all celebrating all the more disturbing.  On the flip side, at the start of the issue, there are four consecutive, red washed panels, that display a vision of a transformed Daisy.  Her missing eye is an expanding blotch of darkness, and as the ‘camera’ moves in, her face transforms from innocence into a monstrous snarl of rage.  Whatever’s coming for Daisy, it’s going to be truly horrifying.

THE RED MOTHER #10 is a masterclass in psychological horror, tapping into well worn tropes of the genre, but transforming them in new and interesting ways.  The betrayal that lies at the heart of  The Red Mother #10 is the true nightmare – all the people Daisy believes are there for her, are actually enablers of an evil set to consume her body and soul.  The ordinariness of the setting, the essential goodness in Daisy’s heart, are all a trap – for her and for the reader – as the time of the Red Mother draws ever closer.

The Red Mother #10 presents a woman in peril, and then amps it up to eleven. The writing and characterization is exceptionally strong in this issue, and the artwork, well, the artwork leads the reader from the ordinary to the horrific and back again with a subtlety that makes it all the more creepy.