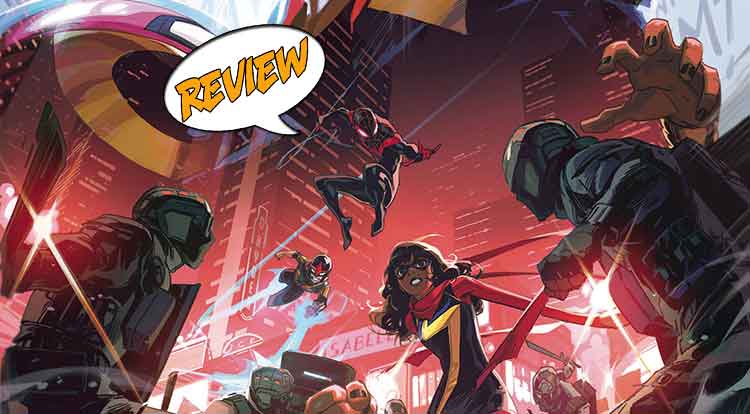 The Outlawed event continues. Things have gone from tense to heated as more and more people choose a side on the issue of Kamala’s Law.  Your Major Spoilers review of Champions #2 from Marvel Comics, awaits!

Previously in Champions: With some of the team detained, another portion of the team mission, Ms. Marvel, Spider-Man, and Nova are left to try and handle the growing tension over Kamala’s Law.

Take It To The Streets

Champions #2 opens in one of C.R.A.D.L.E.’s reeducation centers, with the captured teenage heroes getting a lesson on why youth with powers need guidance and supervision. Some of the teens speak up and point out that they are accustomed to “reeducation centers” except they are called something else.  When things turn violent the instructors quickly put things to bed.  Elsewhere in Chicago, Ms. Marvel, Spider-Man, and Nova are watching an anti- Kamala’s Law rally is being held by local youth.  Partway through the first speech the rally is interrupted by another group who is in support of Kamala’s Law.  The two groups begin fighting and both The Champions and C.R.A.D.L.E. show up to squash it.  The Champions decide to retreat and hideout at Riri Williams’s house.  When they arrive she isn’t happy to see them and the entire team begins to argue with itself until C.R.A.D.L.E. arrives.

Starting To Form Its Own Identity

One of the things that originally turned me off from the Outlawed event was the similarity it had with Civil War.  Almost beat for beat it felt like a retelling of that story.  Here though we begin to see Outlawed diverge as a significant portion of this comic is focused on not the struggle between heroes but the effects this law has had on society as a whole. Also, while it’s clear that some of The Champions have differing opinions about what’s going on, this isn’t portrayed as being an antagonistic relationship but rather a product of how the scenario is affecting them individually. Now, while this portion of the story has nuance, there is a part of this comic that isn’t so layered.  There’s no getting around the fact that this issue feels very analogous to recent protests in the US and the depiction of C.R.A.D.L.E. as being essentially a fascist group with re-education centers, aggressive police tactics, and precognitive discipline comes off as lazy and a bit heavy handed considering the state of social unrest these days.

I have no real complaints about the art in this book.  The characters all have a distinct look and easily interpreted facial expressions.   The one thing I wanted to point out though is a nice use of light and shadows.  Most of this issue feels like it takes place in a late afternoon time period and a low hanging sun is seen backlighting a lot of the characters.  It gives the issue a unique look and a pop that’s not seen often.

BOTTOM LINE: A Spark Of Life

I’ll admit that I had almost given up on Outlawed being something worthwhile to follow, but this issue has renewed my interest in it even if C.R.A.D.L.E. is still a terrible name and a lazy antagonist.  Shifting the focus from superheroes fighting each other to how the issue of Kamala’s Law is dividing society is an interesting take.  Also, making the differences between the teenage heroes being more personal rather than ideological gives the story a weight that isn’t always there in hero vs. hero stories like it.   4 out of 5 stars.

Champions #2 breathes some new life into the Outlawed event that was desperately needed. It’s not perfect, but it adds just enough wrinkles and new perspectives to the ongoing conflict to suggest that this event might be more than just Civil War Jr.