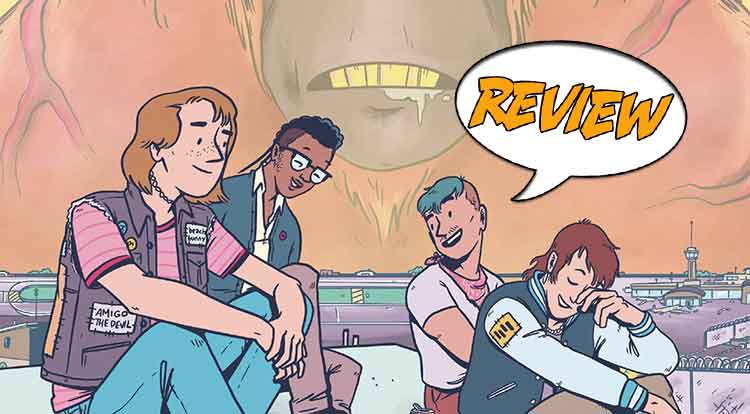 Four friends win a trip to New York and land just as another plane crashes, a plane full of creatures turned into monsters. What happens when they meet? Find out in Terminal Punks #1 from Mad Cave Studios!

Previously in Terminal Punks: Four friends have a band. They have won the Battle of the Bands and are on the way to New York! Their biggest problem – they haven’t figured out a name for the band yet. Or so they think…

I confess to enjoying indie comics. While some things may be a little rough around the edges, the books are often full of imagination and enthusiasm. Such is the case with Terminal Punks #1. It opens in Kentucky, of all places, at the home of the wealthy and eccentric Hart Kelsey as he is shipping his personal zoo by air freight to Idlewild Airport. He doesn’t sign for anything; he doesn’t follow procedures; and he gives the crew a gas compound to use on the animals on the trip. And follows in his own different private plane.

Meanwhile, on another plane, four teens who won a band contest are on their way to New York. Kee, the drummer, is trying to get them to come up with an actual name. He’s also plagued by anxiety with a side of imposter syndrome. His moment of reflection in the bathroom introduces us to the other band members, Sway, Burton, and D’Arby. Kee gets back to his seat as D’Arby suggests “Hello Terrorist” for a name. She has a lot of attitude, does D’Arby.

They land in New York at about the same time as the plane with the animals. We feel like we’re the only ones who know that the crew of the private plane has been killed, the plane itself is on fire, and it is about to crash. The teens land safely and deplane into a terminal whose lights go out. They miss the news bulletin showing the crashed plane and, in the smoke, a monstrous creature walking out of the wreckage.

The story cuts to the accident site where the CDC has set up shop, the Mayor is panicking, and a scientist is suiting up to go in and investigate. Kelsey arrives, reporting eight animals missing from his plane and threatening the Mayor who sends the police in with the scientists. It seems like a lot has happened, considering that the kids in the band haven’t even reached baggage claim yet. And Kelsey does get a little private, “Bwahahaha!” moment.

The teens reach the baggage carousel, not noticing the giant snake behind them, nor when a customer waiting at a counter vanishes and is replaced by a huge smear of blood. D’Arby, the impatient one, decides to backtrack the luggage. Instead, she finds a severed head in the chute. The death and gore in this book, while darkly humorous, is not subtle. Racing to the doors, they find that they’re locked in. Outside is a team of people in hazmat suits. And the kids are stuck inside with a monster.

The investigating team gets a list of the missing creatures. True to the style Kelsey has demonstrated so far, the animals are listed only by names that sound like vape flavors. The team goes in not knowing exactly what they’re looking for. I would say that shenanigans ensue, except that it’s more like death and dismemberment.

The art of Terminal Punks #1 is very much an indie kind of style. The people are a bit cartoony without a lot of detail. Eyes are dots or small circles, and many of the noses are same simple line shape. That said, a lot of care has been taken with the characters. They may not have a lot of detail, but everyone has a few crucial details, some of which may be stereotypic, to give us shortcuts to their characters.

This is not an all ages book. While the carnage has its cartoony moments – such as dead characters having X’s in their eyes – that’s just part of the attitude. There is plenty of blood. We see spilled intestines. One of the monsters rips a fireman in half and we see the spine dangling from his lower torso. The monsters are horrific in their attack, but part of me feels sorry for them. They were just a bunch of poor zoo animals, kept in way too small of cages. There is still somehow something sympathetic about them.

BOTTOM LINE: NOT SOMETHING YOU’VE READ BEFORE

The kids all have pretty distinct personalities that are starting to come through. The story is weird and crazy, and it has a lot of verve. I honestly don’t know where it’s going, but if monster stories with a side of music are possibly your thing, it is an entertaining book.

Punk is not dead, but they are surrounded by monsters.