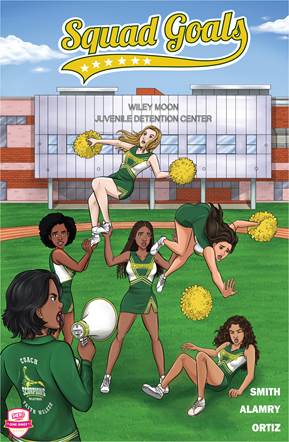 From the Bring It On franchise to the hit Netflix series, CHEER, there have been several glimpses into the exciting world of cheerleading. However, not since the iconic Betty and Veronica comic book series has the sport been explored in the world of comics. This Black Friday, Shero Comics, a Los Angeles-based multimedia company in the business of all things female, is set to release Squad Goals, a comic book that delves into the world of competitive all-star cheerleading with a bit of a twist. Squad Goals tells the story of Faith Walker, a former UCA cheerleader turned championship-winning cheer coach who, after a rogue hair bow incident, loses the 2020 UCA championship. Just before the fall season begins, Faith is fired from her coaching job at Dallas Prep and replaced by Bianca Houston, a former Dallas Cowboys cheerleader who also happens to be her arch-nemesis. While searching for a new gig, Faith is recruited to coach a ragtag team of girls located at a local juvenile detention center. Despite their teen angst and aversion to cheerleading, Faith manages to find something special in each of the girls that she uses to turn them into a formidable cheer squad.

Shero Comics CEO, Shequeta Smith, has already begun gaining interest from Hollywood. “In this business, everyone seems to be looking for out-of-the-box stories that feature diverse characters. At Shero Comics, diversity is always at the forefront of our projects and our mantra is that there is no box, which is why I think Squad Goals is resonating with film producers and studios,” said Smith.

Squad Goals, a one-shot comic book, is now available for pre-order on Amazon Kindle with a scheduled release date of Friday, November 27, 2020. The book will be exclusive to Amazon Kindle before being released to several other platforms at the top of the year. Physical copies of the book are scheduled to go on sale the first week of December and can be purchased on the Shero Comics website, as well as in select comic book shops around the country.