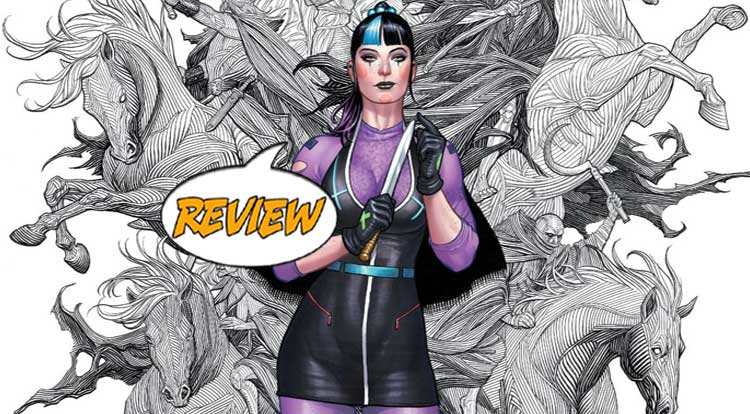 In the aftermath of the Joker War, Punchline is about to teach a master class in indoctrination…  Your Major Spoilers review of Punchline Special #1 from DC Comics awaits!

Previously in Punchline:  As she faces the consequences for her role in “The Joker War,” the story of how Alexis Kaye became Punchline will take Leslie Thompkins, Harper Row, and Cullen Row on a harrowing journey that reveals a fringe teenager’s radicalization to the ideology of a madman.

THAT’S NOT HOW TRIALS WORK

This issue begins an undefined number of years ago, as Alexis Kaye goes on a high school field trip to the local television station, only to end up in the middle of a plot by The Joker.  She watches several people get murdered before Batman arrives to save them all.  Smash-cut forward to the present, as she faces the judge for her crimes during the events of ‘Joker War’, including arson, theft, assault… and one moving violation.  The judge asks if she understands the seriousness of the situation, and the audience erupts when Alexis/Punchline announces that she’s NOT GUILTY!  I’m not 100% clear on why this moment plays the way it does, but it brings Leslie Tompkins and Harper “Bluebird” Rowe into focus, as Punchline begins her multimedia blitz to convince people of her innocence.  There’s TikTok style clips and even a podcast that follows Alexis in her quest to find The Joker, ending with murder and an eighteen-year-old sucking face with The Joker.  As the issue ends, the public is swayed, even Harper’s brother, leaving Punchline with the upper hand…

SHE WAS A *HIGH-SCHOOL SENIOR*?

I try to remain open-minded about story beats and character moments, but the revelation that she was a high school student when her obsession with the Joker was kindled really skeeves me out, and the sight of her obliterating a man’s face with a dagger because her bootleg Joker-venom failed is just…  too much for me.  I’m not a big fan of stories that center and lionize the villainous characters, and this one has all of that, plus just a touch of the Joaquin Phoenix movie’s tone to make Punchline even less appetizing than the all-out DC media blitz has.  Mirka Andolfo’s art is aggressively fine throughout the issue, giving Punchline and Bluebird elongated bodies and ENORMOUS eyes throughout, but overall holding together okay.  The appearance of Batman is really quite good, and the closing sequence with the enormous crowd surrounding the Gotham City courthouse stands out as well.  All in all, though, the talking sequences (of which there are many) come across as a bit static, which affects my appreciation of the overall issue.

BOTTOM LINE: BOTH DISTURBING AND GRATUITOUS

In short, Punchline Special #1 is fine, but both the consistency of the art and the brutality of the story are off-putting to me as a reader, enough so to bring things down to a slightly below-average 2 out of 5 stars overall.  If you’re heavily invested in Alexis and her character, it might work better for you as a reader, so mileage will absolutely vary here, but the overwhelming feeling that I get after reading this comic is one of fatigue, paired with confusion about what the draw of Punchline is supposed to be.

Punchline's back story is horrifying, even in the context of Gotham City's caravan of horrors, but there's something that feels forced about the whole thing.