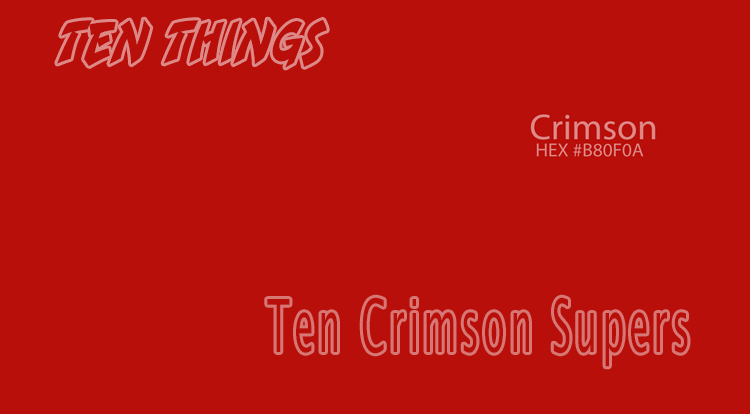 Alabama has their tide, Harvard has their newspaper, and even the various supers of the multiverse get in the #B80F0A love…  Welcome to Ten Things: Ten Crimson Supers!

Whooshman-Bicarbonate Films, in conjunction with An Amateur Comics Historian and the late Lee Travis, Presents: A member of the same order as Warrior Nun Areala, Sister Alicia (aka Jane Smith) operated in and around WW II, punching evil in the name of the church. She was so successful, in fact, that the Pope himself recruited her to be a special off-the-books avenger, battling Axis super-villains across the European theatre. She fell in love with a Japanese officer, and may have borne his child, who may have grown up to become the legendary Ninja Nun. A member of the Freedom’s Five, a group of mystery men operating circa WW I, René Duquesne est vraiment très Français, oh hon hon hon! Like the other members of the team, he is a very minor character and there are contradictory stories among his appearances. He has been strongly implied to be an ancestor of Jacques Duquesne the (mostly) heroic Swordsman of The Avengers, while one story identifies him as Jean-Luc Batroc, likely a precursor to the roguish Batroc The Leaper. It is unclear whether Batroc is an alias of Duquesne or if there was more than one Crimson Cavalier. A fictional superhero (Aren’t they all?), Chuck Indigo is the favorite superhero of young Timmy Turner. Protecting the city of Chincinnati from all manner of evil, he was once a struggling late-night talk show host until he was bitten by a radioactive celebrity. Since young Timmy has literal Fairy Godparents, he has both entered the world of The Crimson Chin and brought the comic book hero into the real world to act as his sidekick Cleft the Boy Chin Wonder.

For an added bit of meta-humor, the hero is voice by Jay Leno. Another retro hero, this time a veteran of WW II in the Marvel Universe, Frank Bohannon got very reactionary in his old age. Choosing to capture and hunt criminals, his Most Dangerous Game came to an abrupt end when he and his pals targeted the X-Man Storm. Crimson Commando turned himself in to the authorities, who put him on the government-sponsored Freedom Force team, where he failed upward until he became the leader. He then got a bunch of people killed and was wounded so badly, he had to be rebuilt into the creepy Cyborg X.

Frank is a jerk, is what I’m saying. On Earth-9997, The Avengers were murdered by The Absorbing Man, leaving a grieving and less-than-sane Tony Stark to build androids replicating his lost comrades. As a member of the Iron Avengers, Crimson Sage and her team patrolled New York City, with the former Iron Man watching remotely and guiding their efforts. Though “Wanda” and her team were destroyed by the Skull’s army, they were later rebuilt by King Britain to defend his homeland. A superhero from Australia who was seemingly American in-story, Ralph Rivers’ mother was killed in a burglary gone wrong. His surgeon daddy responded by grafting wings to the boy’s back that allowed him the power of flight. Ralph grew to become a private investigator, disguising his wings as a hump until it was time to take to the skies and punch evil! The Crimson Comet’s adventures lasted for nearly a decade, a very respectable run for the 1950s, and he was later revived as the retired overseer of The Southern Squadron. One of many sons of Adam Destine and a djinn, Rory Destine (and his twin sister Pandora) were shocked to find that their aunts and uncles were actually their siblings. All of the ClanDestine inherited dad’s near immortality with different expressions of the magical energies that make him invulnerable. Rory can control gravity and project force-fields, as long as his sister is in proximity. A lifelong superhero fan, Rory is the first of the Destines to don a costume and actively fight crime. An actor/stuntman by trade, Mitch Goodman landed a plum role on the soap opera ‘Tomorrow’s Dawn’, playing the superheroic Crimson Cougar. (This is in the world of Astro City, by the by, where superheroes are relatively common.) After thwarting a robbery with the help of his FX team, Mitch was thrust into the spotlight and became a minor sensation. This led a team of villains to target him and teach the Crimson Cougar a lesson about heroics, forcing him to take drastic action. A member of The Limbo Men, an unorthodox team of supers overseen by sorceress Granny Gutman, Rufus Jones has a mystical trident that he found in a temple in Laos. A veteran of the military (implied to be a Vietnam veteran, since the story took place in 1983) Crimson Trident has the power of creation, destruction and preservation thanks to his three-pronged power object, though it seems to affect his mental state. He is also able to fly.

His costume is not particularly crimson.

The younger daughter of Ikano Kato, the original partner of the Green Hornet in the 1930s, she took over the role after her brother Hayashi retired in the 80s. Mishi quickly retired and was replaced by Hayashi (who looked more like Bruce Lee, making the licensors happier), but she returned later after the tragic death of her fiancee. Taking on the new code name, that of a legendary samurai, The Crimson Wasp fought crime with a much more lethal attitude, bringing her into conflict with her brother and a new Green Hornet. Stories set in the future of the Now Comics continuity indicate that Mishi married that Hornet, and their son took up the role in a cyberpunk future world.

This week’s topic, Ten Crimson Supers, is all me but feel free to follow along @MightyKingCobra for more Ten Things madness on Twitter. You can also check out the full Twitter archive here! As with any set of like items, these aren’t meant to be hard and fast or absolutely complete, if only because there are only so many colors in the light spectrum, and nobody wants to read about the Pea-Green Guardian. Either way, the comments section is below for just such an emergency, but, as always: Please, no wagering!