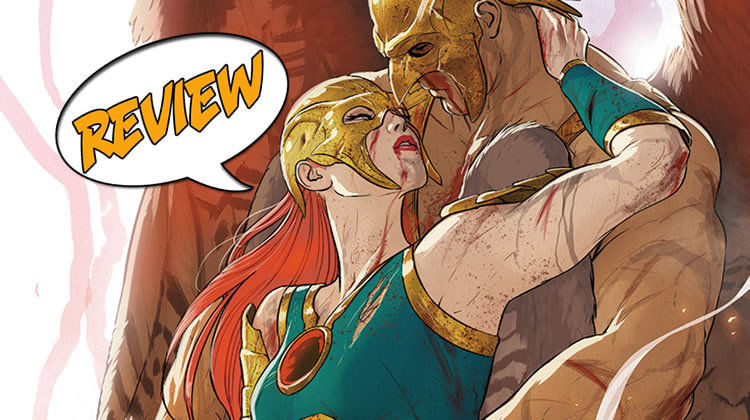 It’s always sad when a favorite hero’s title gets cancelled. This week is the final issue of Hawkman, and I’m grieving! Take the jump for this review of Hawkman #29 from DC Comics.

SOLICITATION: He’s lived and died and lived again. But now, with just one life left to live and the reincarnation cycle at its end, will Hawkman sacrifice everything to protect the woman he loves from the cursed blade of Hath-Set? Learn the fate of Hawkman and Hawkwoman in a tale that will take you to the end of time and space!

As long as I have enjoyed the Hawkman character, I know he’s been tough for some to follow. Carter Hall has been a winged Batman (detective), a galactic Buck Rogers (space-hero), a tough-guy enforcer on his home planet (policeman), a mace-wielding barbarian, and many other kinds of hero not to mention a member of the JSA and the JLA.

I really thought Mr. Venditti did a spectacular job of knitting all these different incarnations into one cohesive unit. He also started out with a great artist in Brian Hitch for the first 12 issues, so I was really optimistic that it would be a high-flying success.

I also liked that they focused on Hawkman himself instead of him and Hawkwoman as a pair. It’s always good to flesh out an individual before blending him or her into a team.

I started to get concerned when there seemed to be rotating artists on the title. That’s never a good sign.

Still, the Winged Wonder got another year under his belt, and although I heard the sales weren’t as good as I had hoped, I kept telling everyone I knew about the book, even giving some copies to friends.

It turns out, it seems, that COVID-19 was a foe stronger than the Shadow Thief, the Gentleman Ghost, Hath-Set, or even other versions of himself. Although DC kept making and providing comics, the world had less money and seemed to have to cut back on those “maybe” titles. Not long ago, DC announced several books were cancelled, and my Hawkman was in there.

That being said, this issue was a terrific and satisfying finale for the current run. Given how it all wrapped up, it seems that Venditti and company felt like the Hawks were pretty much done in DC… at least, for now.

Fighting their original Egyptian foe was a great way to bookend this series. It also turned out that that Hawks were no longer going to be reincarnated, so these were their last lives. That upped the ante quite a bit.

However, leave it to Mr. Venditti to put one last interesting twist on the Hawks. I also was glad to see another happy couple in the DCU, something that’s very rare these days.

And a happy ending! How unexpected and how enjoyable!

I really feel that the art team on this final issue gave it their all. Be it skin dripping off the skull of the bad guy or explosions or the “future” of the Hawks, every page seemed to really soar, in my opinion.

As always, I judge artwork along two lines: facial expressions and action sequences. Even the aforementioned “skin dripping” sequence gave us an easy-to-read expression on the character, and I always knew what Carter and Shay were thinking and feeling.

Then, too, the battles made me hurt when I read them. Hawkman stabbed—ouch! The Hawks flying high at one point made me jubilant! And that final sequence made me happy. Really.

BOTTOM LINE: The End of the Perfect Hawkman Title!

I’m going to miss getting a new Hawkman book every month. When I read my weekly stash, I always put a great book on the bottom so I end with a satisfying read. Hawkman was always the last one I read the week it was released. And I was always thrilled to see my guy get such good treatment! Thank you, Mr. Venditti!

What the future holds for the Hawks, I don’t know. I hope we haven’t read the last of these two high-flying heroes. I just can’t imagine how anyone could do better, though!

Until next time, Hawks, I’ll be ready and waiting!

Leave it to Mr. Venditti to put one last interesting twist on the Hawks. I also was glad to see another happy couple in the DCU, something that’s very rare these days.