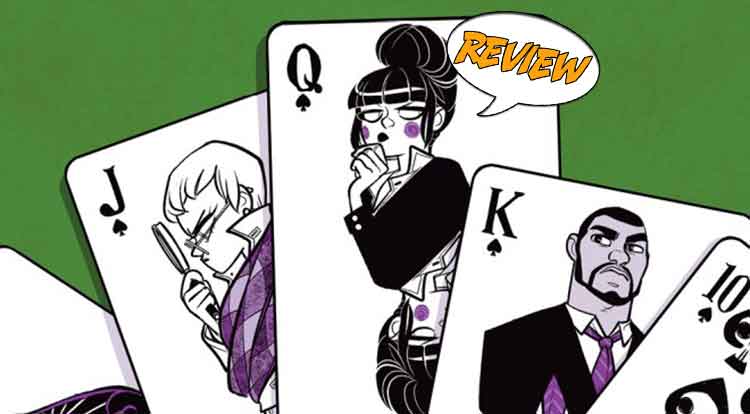 Lottie may not have a handle on her own mystery, but she’s convinced the police where the next big casino hit will be. Can they take on the gang involved? Find out in Wicked Things #6 from BOOM! Box. Previously in Wicked Things: Although she has a secondary special job helping the police, Lottie is being held in custody. She plays some chess with a fellow resident (Bulldog) and questions him about robbing casinos. There has been a rash of casino robberies lately. Lottie tracks them on a map and finds that they look like a badger’s face. Her friend Claire, meanwhile, tries to investigate Lottie’s case by questioning other ex-child detectives. Miss Maki admits to her mistranslations, but also claims to have seen Lottie as an evil spirit, covered in blood. Bulldog is skeptical of Lottie’s “badger face” theory but does let slip his knowledge of a high stakes casino which could be the gang’s main target. Lottie takes this information to the police and is brought into their undercover operation!

IT’S THE BIG NIGHT OUT!

Wicked Things #6 opens with Lottie exploring her residence. She finds an opening that leads to the roof. Up there is a handful of tools one could use to slip out of a GPS tracker. We think she’s about to slip away – it would be so easy for her – but she is stubborn enough to play by the rules. Meanwhile, Claire haunts the hospital. She’s been trying to gather information, and all it’s doing is confusing her. She doesn’t have Lottie’s knack for putting things together.

On the day of the big sting, as Lottie puts on her makeup, D. I. Dennison comes in to talk to her and to thank her for her help. He has come around to thinking she is not actually a murderer. All too soon, it is the evening and at Le Grand Jeu Casino, a new guest arrives. He is a big man in a well-tailored suit, and his briefcase full of cash grants him entry. He wears a cast on one arm and claims there’s a steel pin in it when he goes through the metal detectors. Suspicious?

The casino is crawling with undercover cops. Lottie is a waitress tonight. Detective Bohle is a croupier and Dennison is in the guise of a guest. Lottie chats with the two of them and is scolded for being a little too obvious. Dennison wanders by a blackjack table and someone offers him a seat. He is right next to the big guy we just saw arriving a few pages ago who hands Dennison a card that tells him to turn off his mic. He is wearing a wig, but it is none other that Bulldog Benson, Lottie’s housemate and recent chess opponent.

Benson is cross. He apparently helped the police with their operations and feels he has not gotten enough thanks and appreciation from them. Dennison catches Lottie’s eye and she comes over to them. Bulldog takes her hostage and demands anything of value from anybody. Well, it’s mostly police there tonight, so he may not get a big haul. Bulldog admits to being the mastermind behind the casino robberies. He also has a small gun hidden inside his cast. He tries to sneak out hiding behind Lottie. Dennison jumps him – and is shot!

But he’s not dead, thank goodness, although he is seriously injured and is taken to the hospital. When Lottie takes a break and goes outside, she runs into Bulldog who urges her to come away with him. He admits there weren’t two rival gangs involved; just him and his bunch of biathletes. He also admits to trying to take out D. I. Dennison for his own protection. He thought he was playing Lottie to get to Dennison. Little does he know she was playing him, and he is shortly apprehended. All is going well – and then Miyamoto briefly regains consciousness!

The art of Wicked Things #6 is lively and fun. The characters, especially Lottie, are so expressive. The opening sequence is a case in point. As Lottie scrambles up to the roof and can’t help being a detective, figuring out how easy it would be to escape, we see her shift between being wistful about her lost freedom and being utterly consumed with wondering which of her housemates is the one who is breaking the rules, even though they are all crooks.

I like the way they sneak Bulldog in as the casino thief. We don’t see his face at all when he arrives at the casino. All we know is that he is a big, muscular guy. He is also wearing a wig, but we see his head only from behind, and there’s no reason to suspect. When he hands the note to Dennison, we finally see his face, recognizable under the wig. It isn’t until he grabs Lottie that the wig slips off, momentarily creeping down his arm like a weird, furry creature.

I enjoyed Wicked Things #6 so much. This is a tidy end to a story arc. I like that we started out with one mystery, and instead solved another one. I certainly home this takes off as a series. I love the characters and I thought the writing was so clever and fun.

Lottie final gets a chance to show the police her talent as a new friend switches sides.