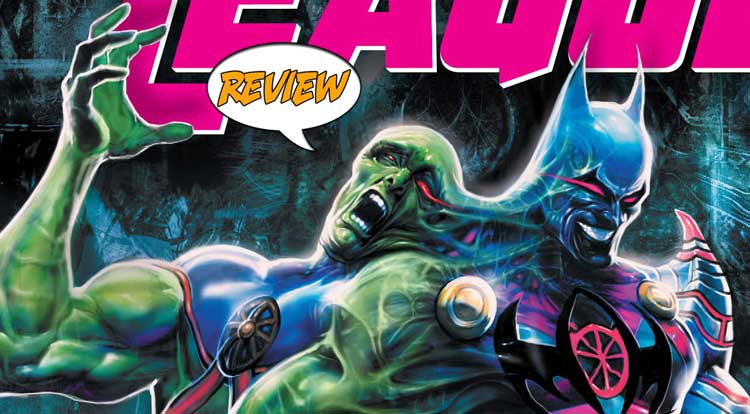 It’s Mindhunter versus Manhunter, with all reality in the balance! Your Major Spoilers review of Justice League #56 from DC Comics awaits! Previously in Justice League: The Justice League has nowhere left to hide from the agents of Perpetua. The towering, nightmarish Omega Knight hunts them to the edges of Brimstone Bay and will stop at nothing until the team is obliterated! And all the while, above Perpetua’s throne, Hawkgirl battles the Mindhunter for the soul of the man she loves: Martian Manhunter!.

“WE NEED A MIRACLE…”

All seems lost as we open, with Cyborg and Starfire seemingly dead at the hands of the Omega Knight, Hawkgirl trapped in Martian Manhunter’s mind, and Detective Chimp refusing to help, having seen too many friends die already. But, even a telepathic Batman isn’t ready for Hawkgirl’s fury, allowing her to gain the upper hand, distracting Mindhunter just long enough for J’onn to push back. As for Detective Chimp, he realizes just in time that the horse Wonder Woman had given him was more than just a mount, sweeping in for the save. With a little help from some super-heated Nth Metal (Martians hate fire, even when they’re just ersatz Martians), Mindhunter is brought down and Luthor, Starfire and Cyborg pulled from the jaws of death. The team quickly regroups and Nightwing develops a plan, using Luthor’s inside knowledge of Brainiac, who has become Perpetua’s throne to save Luthor’s former partners from The Omega Knight. It works, thanks to the seeming sacrifice of Detective Chimp, but leaves Nightwing alone against The Legion of Doom!

JOURNEY TO THE CENTER OF THE MARTIAN

As someone who hasn’t been following the main ‘Death Metal’ title, the last few issues of Justice League have been a little bit off-putting for me. One the one hand, I like the ‘Mad Max’ vibe of it all, and the ragtag group of heroes is one of my favorite tropes, but it feels like there’s so much I’m missing to comprehend the whole story. The art by Rocha and Enriques is nice, especially the apocalyptic redesigns , but there are a few moments where either the coloring or the art is too dark, making it hard to tell whether I’m seeing the outline of Cyborg or Luthor and obscuring bits of seemingly important story. The Omega Knight looks great, as well, but his inactivity in this issue makes his threat seem quite remote, with Williamson focusing entirely on Nightwing’s angst and the love affair between Hawkgirl and Martian Manhunter. It makes for a more personal story, but it also has a detrimental effect on the scale of the narrative.

BOTTOM LINE: FEELS LIKE METAL HAS BEEN GOING ON FOR YEARS

In short, Justice League #56 is a pretty good issue with some storytelling drawbacks, but uses it’s characters pretty well, even if the threat is oddly vague, earning 3 out of 5 stars overall. I appreciate seeing Nightwing at the center of this story, as well as the use of Luthor as viper-in-their-midst a lot, so I think I’m willing to come back for the end of this arc and see what has happened to the rest of the usual Leaguers.

This issue does fun things with a strange setting and unusual characters, but the Death Metal part of it all is kind of obscure and some of the storytelling decisions just didn’t quite work.