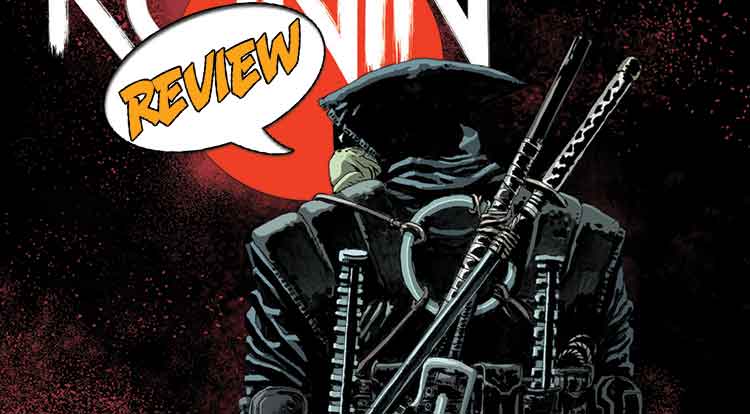 Its dark days for the last hero in a half-shell.  All on his own, with nothing left to lose, he embarks on one last chance at vengeance.  Your Major Spoilers review of Teenage Mutant Turtles: The Last Ronin #1, awaits! Previously in TMNT: The Last Ronin: In a future NYC far different than the one we know today, a lone surviving Turtle goes on a seemingly hopeless mission to obtain justice for his fallen family and friends.

TMNT: The Last Ronin #1 opens with the last turtle looking at NYC (that is now controlled by The Foot Clan and The Shredder’s grandson) from across a horrifically polluted river.  After a brief moment of reflection he then sets out.   What then follows is a comic book length action sequence showing the turtle trying to infiltrate The Foot Clan’s headquarters via exploding dynamite, encountering cyborg ninjas, escaping via a very long fall, and eventual evasion of his pursuers.  The issue then wraps up with a somber moment as the remaining turtle believes he has failed his mission and prepares to join his fallen brothers.  A familiar face from the past then appears to change his mind.

In a refreshing twist, TMNT The Last Ronin #1 takes a kinetic approach to the type of story that has long been explored in slower, more hand-wringing ways.  Instead of a lot of brooding and pondering, the main character seems more concerned with accomplishing a mission rather than confronting any personal demons or holdups. That’s not to say there isn’t space for this sort of introspection, which leads to one of the other clever things this issue does. Even though there is only one surviving turtle, the creative team still manages to include some of that old back and forth, and even some levity, between the four brothers that’s a hallmark of most TMNT properties.  They accomplish this by having three of the turtles be very vocal and persistent voices in the surviving turtle’s head.  While this isn’t exactly a new narrative mechanic, in fact it edges dangerously close to cliché, it feels appropriate here and is used effectively to make it seem like the main character isn’t just talking to himself, even if he is.  A few nitpicks though: For a comic series that has been marketed as a gritty and dark tale, it does feel a bit tame, especially with the inclusion of cybernetic foot clan soldiers, that takes a bit of the bite away from seeing a Ninja Turtle slicing and dicing someone.  Other than that, the final page of this issue possibly reveals the identity of the surviving turtle and it’s done so in a clunky line of dialog.

The art in this book is a bit of a double-edged sword.  On one hand, with such a heavy focus on action, there’s an effort to make sure that is all conveyed effectively and in that regard it absolutely works.  The trade-off seems to be that in order to accomplish this goal there needs to be an overabundance of panels per page.  With an exception at the end of the issue, each page has between 6 and 12 small panels, which doesn’t leave much room for anything other than the characters.  Thankfully the character designs are nice here.  The turtle for once actually looks like a ninja and the way his brothers’ weapons are strapped to him gives him an intimidating look that the turtles have rarely had throughout the years.

Teenage Mutant Ninja Turtles: The Last Ronin, wastes no time in establishing itself as a high-octane, action focused, tale of revenge.  What’s impressive is that so far it has managed to do this without sacrificing some of the aspects of the TMNT dynamic that has made it such an enduring property.  Clear, albeit crowded, art with solid character design helps carry this issue and makes it an enjoyable read all=around. 4 out of 5 stars.

Teenage Mutant Ninja Turtles: The Last Ronin #1 is a fast paced opening for a series, that feels like it’s been hyped and marketed for a long time, that does not disappoint.