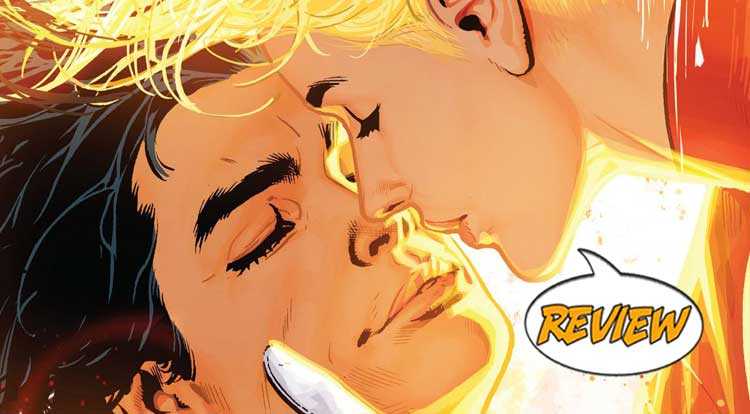 It’s the kiss heard around the fandom and YOU ARE THERE!  Your Major Spoilers review of Legion Of Super-Heroes #10 from DC Comics awaits! Plus, who is dating whom in the 31st century?

THE NEW STATE OF OA

After being cleared in their trial, the Legion of Super-Heroes has now split up around the galaxy to deal with multiple issues at the same time.  Saturn Girl and Superboy, now officially dating, have gone to planet Gotham to deal with an escaped prisoner and be incredibly inappropriate in their burgeoning relationship.  Gold Lantern, Blok and Brainiac 5 have delivered Crav, The General Nah to Oa, where the Elders of Oa are going to hold him, giving us our first glimpses into the reality behind Gold Lantern’s existence, as well as an effortless moment of badassery from the Dryad Legionnaire.  They also have an ominous message about the coming Darkness and the crisis: They can’t be sure if the Legion will end it or be the cause of it.  Ultra Boy addresses (read: “punches the stuffing out of”) the remaining members of his father’s cabinet on Rimbor, while a delegation of Legionnaires seeks out Mon-El on New Krypton, only to finally discover his problem with Jon Kent, thanks to his great-grandfather…  General Zod.

Oh, and Mordru has sought out Rogol Zaar for a team-up.

THE OLD STATE OF MORDRU

Even though I don’t care for the last-page cliffhanger return, this issue gives us a lot of interesting and entertaining moments, including Ultra Boy seemingly realizing that there’s nothing keeping him from leading both the Legion and planet Rimbor and a nice interaction between Brainiac 5 and Ayla Ranzz discussing how her passion will be as important to the Legion as his logic, something that has sometimes fallen aside in previous Legion teams.  Meeting Mon-El’s family, including his three daughters, make for an interesting moment, and overall, Bendis keeps the scripting tight while throwing in his trademarks asides and dialogue back-and-forths at a tolerable level.  I like Sook’s design work in this issue, and for the most part, everyone looks really good under his pencils, though there are a couple of moments where a character’s facial expression is neutral to the point of affecting the comprehension of the story.  All in all, though it’s visually beautiful throughout, and special kudos has to go to the lovely half-page splash of the Kryptonian delegation flying in to meet the Legion.

I’ve been more satisfied with the Bendis Legion than some of my fellow fans, but I truly feel like Legion of Super-Heroes #10 is the first issue that has its feet firmly beneath it with clear narrative intent and a wide focus on the team’s many members, with Sook’s art making for some fun moments and just enough teenage nonsense and back-biting to remind us that it’s the LSH, earning 4 out of 4 stars overall.  If nothing else, the revelations about Gold Lantern gave me a lot to chew on and perhaps the first meaningful expansion of the Emotional Spectrum concept in over a decade.

Aside from a less-than-welcome villain cameo and some PDA, this issue shows us a Legion in action in a vibrant United Planets with a lot of good information worked in and strong art.