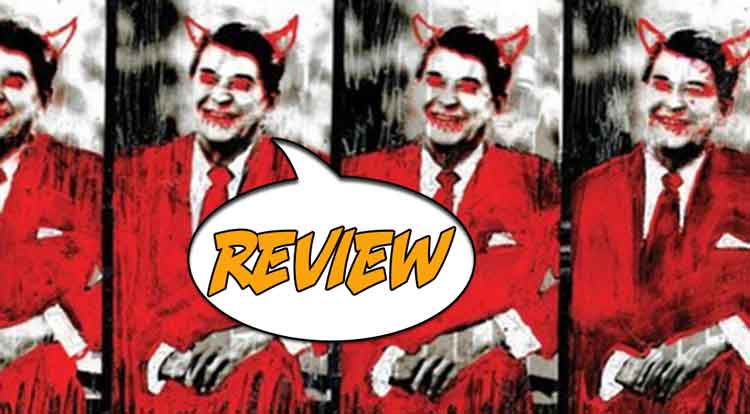 In Department of Truth #2, it’s Satanic Panic time as Cole gets the Devil inside him.. While the Star Face Man eats babies, Cole comes to terms with what happened when he was a boy. Do I smell brimstone? Find out it in your latest might Major Spoilers review! Previously in Department of Truth: Cole is an FBI researcher, whose visit to a Flat Earth Society convention wound up with him at the end of the world contemplating conspiratorial madness. When it turns out Lee Harvey Oswald is very much alive, working for the FBI and stamping out conspiracy theories so powerful they are manifesting in the real world, Cole finds himself well and truly through the Looking Glass…

WE GOT THE POWER!

There’s nothing like a good conspiracy theory to excite the senses. I mean, where’s the harm in it? Like minded people getting together to talk about the possibility that this or that is real, what that says about what the people in power have been saying all along, and the likely outcomes are of the wider world discovering all this secret information.

Of course, that’s pernicious nonsense. Conspiracy theories have over time proven to be harmful, dangerous even, estranging friends and family, leading to violence and even mass murder – the Protocols of Zion, anyone? The Satanic Panic (which appeared to be exclusively an American mania) is a case in point, where dozens of innocent people – parents, teachers and the like, were sucked into a morass of lies and fabrications, revolving around the notion of Satanists in our communities destroying the lives of countless children.

Dangerous nonsense, that also happens to fuel Department of Truth #2. James Tynion IV  is careful to make sure that the reader is left in no doubt that the hysteria from the 80s was founded in nothing but lies. That said, it provides a powerful story hook, and allows us a sense of who our lead character, Cole, is.

GET THEE BEHIND ME, SATAN

The idea that conspiracy theories can come true if enough people believe them is scary enough, scarier still when you consider the nature of many of them. The Satanic Panic of the 80s, which extended to allegations about role playing and video games as portals for Satan to come steal your kiddies, was bad enough. But what if it was actually real, or believed by enough to become real? That’s the central tenet of Department of Truth #2, where we see victimized children, in the shape of Cole, menaced by the Star Faced Man, a creature with a red pentagram etched into their face, feasting on a baby. Martin Simmond’s artwork is visceral and grisly, his penchant for splattering paint across the page only adding to the sense of dislocation Cole, and the readers, feel. This issue is a visual feast, a gastronomic experience for the eyes, full of menace and a deeply grounded sense of unease.

James Tynion IV pushes the storyline forward. There’s less of Lee Harvey Oswald, and more of Cole and his partner, Ruby. There’s a mystery around Ruby that is deliberate, and will no doubt be looked at in later issues. While the Star Faced Man is this issue’s hovering antagonist, the woman in the sunglasses with the X’s for eyes, who appeared in the debut issue, makes a reappearance. She appears to be a focal point for a lot of what is happening. She promises to be an interesting and indeed, frightening counterpoint to the Department’s efforts. There are nice touches throughout, including a visit to the bowels of the Department, where efforts are made to stop conspiracies spiralling out of control on the internet, and a researcher who literally wears a tin foil hat. It’s all bonkers nonsense, but told and illustrated with such conviction you are helplessly drawn in. A bit like a conspiracy theory, really…

if you aren’t having fun with the meta concept of Department of Truth go to the doctor for a pulse check. The idea that conspiracies can become so believed that they manifest in the real may be an old one, but in this series, it is fantastically realized with a wry sense of humor and the wonderfully moody and atmospheric art. Come for the tin foil hats, and stay for the mind bending horror!

Department of Truth #2 begins our march deeper into the insanity of American life, as James Tynion IV examines the entrails of America’s fascination with conspiracy theory nonsense. For a nation predicated on notions of truth and justice, the way significant segments of the community have embraced insane nonsense in recent years is both frightening and, alarmingly, exhilarating. Department of Truth #2 allows readers a safe space to examine all this, all within the frame of world shattering possibilities.