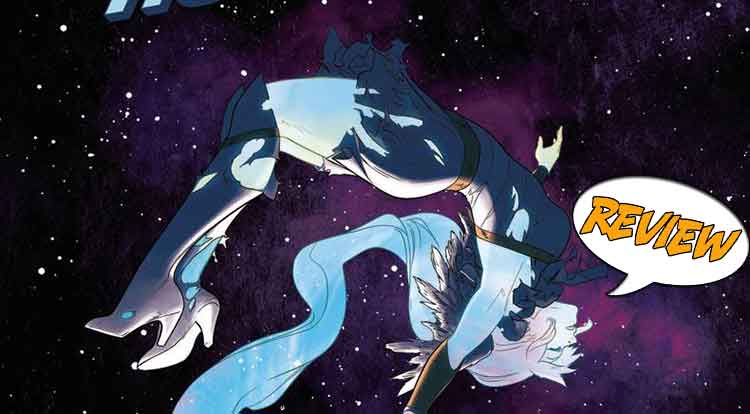 Having barely survived their time with Doc Justice, The Runaways must now adjust back to their lives before, but some of them have different ideas.  Your Major Spoilers review of Runaways #32, awaits!

Previously in Runaways: After the events of the last issue, the Runaways are in a dark and scary place.  There are so many pieces to pick up and choices to be made.

Runaways #32 opens in a normal classroom with the teacher introducing a new student: Gert.  Things then flashback to the team returning to their old headquarters The Hostel.  The team tries to return back to the way things were but it’s clear that things have now become strained.  Molly receives a text, inviting her to the mutant nation of Krakoa, while Chase goes about destroying the weapon he had received from Doc Justice.  The group is then surprised by the arrival of their old ally Doombot who claims that the team needs someone to look after them.  Gert then announces that she’s decided to go back to school. Victor then announces that he’ll go back to school as well.  The team is further shocked when Gib announces he too wants to attend school and reveals he can change his appearance to look human.  Chase and Nico begin to work out how they’re going to make this all happen.

One of the things that the solicitation of this issue boasted about was how this is a good jumping on point, but I can’t say that I agree.  This issue is primarily focused with the fallout of the previous storyline with most of the team at odds with each other over one thing or another, but there isn’t much in terms of establishing character traits, or explanation of why they’re upset with each other.   Not to say that this issue doesn’t work, just not as a jumping on point.  As a continuation of the series, this issue is actually fairly effective.  One of the best aspects of this series has been the push and pull in the group between remaining the angsty group of teens they were when they were brought together and growing up a little and putting some of that resentment away.  This issue sets up another interesting chapter in that struggle. Runaways is also a series that doesn’t shy away from having an occasional issue without any punching, kicking, or laser blasting.

One of the hallmarks of some good comic book art is if it’s able to tell some of the story without the assistance of dialog or narration.  In this issue there’s a small wordless sequence that shows our group struggling to get back to normal and continue their lives.  Even without any sort of dialog to help things along, it’s pretty easy to see what’s going on and the sort of emotions the characters are battling with.  It’s just one of those moments that deserves some attention that you don’t get enough of in comics.

Runaways #32 feels not only like the beginning of a new arc (just like it was advertised as in the solicitations), but also a moment to ease the characters and by extension, the reader out of a pretty action-packed and bombastic storyline into something more nuanced. While it doesn’t quite feel like a good jumping on point for new readers, it does feel like a re-introduction for current readers. 4 out of 5 stars.

Runaways #32 is a character driven issue that relies on interpersonal conflicts, rather than outright physical ones, to set up a new arc and set of troubles for the main characters.