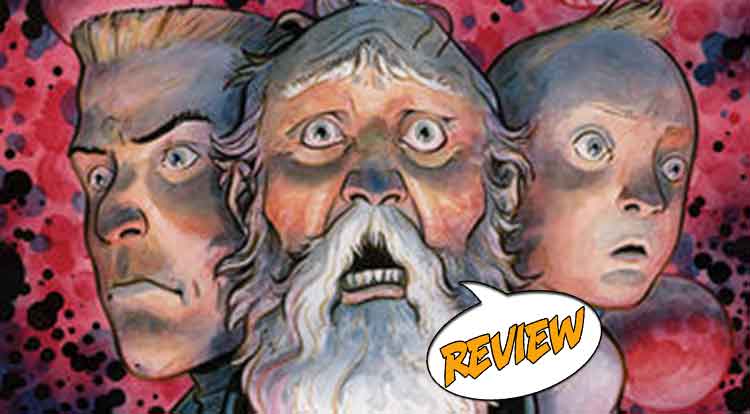 We know Colonel Weird was an astronaut. But what has made him both all-knowing and often forgetting? Find out in Colonel Weird: Cosmagog #1 from Dark Horse Comics! Previously in Colonel Weird: In the world of Black Hammer, there once was an astronaut. Or there will be an astronaut. Or maybe there has been one. All we know of Colonel Weird is that he started out as an astronaut, but his adventures through space have cost him his sanity and he seems to live in a universe of his own, one that only occasionally runs tangential to the other heroes. But everyone has an origin story, and this is his.

SHATTERED SHARDS OF THE PAST

Colonel Weird: Cosmagog opens with the Colonel appearing on an empty highway running through wide open land. He’s looking for Abraham and Gail, but they aren’t here; it’s only him. He walks until he reaches an abandoned gas station. He tries to remember what brought him here, the trouble being that he has seen literally everything, so it’s difficult to sort through. His friends, he finally remembers, went home. And he came here.

This is where things turn a bit trippy. He realizes he’s thirsty and pushes open the door. As he walks through it, the white-haired and wild-eyed astronaut melts away and he becomes a young boy, and we’re back in the forties. The shopkeeper calls him Randy and lets him have a soda for free. But when he opens the cooler, he falls into space and comes out at the battle against Anti-God.

If you have never read Black Hammer, you will still understand that we’re seeing a story told in a nonlinear fashion. If you have read it, though, people and moments seem familiar, but seen from a different angle which makes the whole experience a bit richer. I’ve always found Colonel Weird to be poignant, and this story does not change that.

We travel through more fractured moments in Randall’s life until he finally understands where he is, but he also realizes he cannot see the pattern of everything any more, and without this, he feels lost. He feels like he has forgotten something and ponders this. Then he finds his former selves around him and they confirm he has forgotten something, and he must find it again or they will all be lost. His youngest self suggests retracing his steps, so that’s what he does, taking the hand of himself as a boy and stepping into 1946.

TYING THE FUTURE INTO THE NOW

The art of Colonel Weird: Cosmagog #1 is lovely. It’s a blend of strong outlines and colors that look like watercolor. Characters and items in scenes are clearly defined, which helps when things start getting strange. But it is the colors that pull you in. Their subtlety instantly makes the gas station convincingly old and abandoned. Colonel Weird’s spacesuit is intact, but on closeup we can see that it looks worn, as though it is years old but is managing to hold up. Even though there is an impressionistic feel to the scenery, at the open it is such a familiar and understandable place that it seems very real.

This makes the time-shifting moments of the story feel surreal, which is the perfect tone for a story like this which is not being told in a linear fashion. Some panels look real, almost like something you’d seen in an older comic. Then there are sudden cosmic moments where Randall is off in the universe, which is often greenish and full of disembodied eyes. Toward the end there is a panel I love, a striking image of the greenish universe superimposed over the open plains of young Randall’s world, and fracturing into shards like pieces of glass. It is breathtaking.

Colonel Weird: Cosmagog #1 is a strong entry in the Black Hammer universe. The Colonel has always seemed a little sad, and to follow him from child to adventurous adult and then through whatever else has been through is captivating.

Colonel Weird travels to his own past to find what he has forgotten.