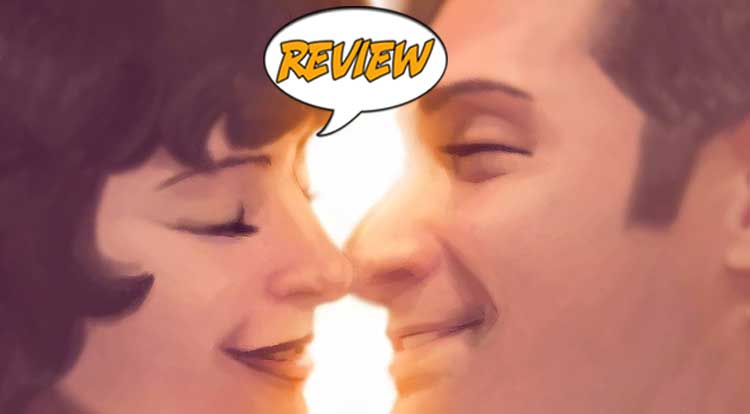 Previously in Sex Criminals: Jon and Suzie shared a secret, and then everything got really complicated.

We open with a wedding invitation, but not the one I hoped to have seen.  It’s Dewey and Bud’s Destination Wedding, including what seems to be a video component that seems to be their own show.  We then cut to a helicopter arriving at the island retreat, and the awkward hellos begin, especially between Myrtle and Suzie.  Myrtle is now apparently the security officer, complete with anti-aircraft guns, while Suzie’s mom is part of something that definitely isn’t a cult.  As for Jon, he’s single, and working within the prison system  to provide art therapy and the arts to the incarcerated, while Suzie and her new boyfriend Guy are fine.  They’re… fine…  really.  The ceremony itself is pretty wonderful, reuniting our cast with some all-new dynamics, and ending with a quiet moment on the beach that is just plain heartbreaking, while also being the perfect ending to this strange, personal, perverse comic-book experience.

Apparently, this entire exercise began with a dare and turned into something entirely different along the way.  It’s the book that I’ve repeatedly said is nearly impossible to TALK about, much less explain to people, as much for the strangeness that is Jon & Suzie’s life as for the difficult sexual context.  Most impressively, everyone in this book feels like a complicated, well-rounded, awkward human being trapped between their own excesses and their best instincts, and this issue’s post-scriptiness adds to that impression.  Fraction and Zdarsky know exactly what they’re doing artistically, showing us the complicated nature of relationships and human existence, doing it with truly beautiful art throughout.  Even years after we last saw them, every character is perfectly recognizable as soon as they appear on panel, and every voice is still recognizable as soon as their first word balloon.  This is not a comic that a casual reader will be able to pick up and fully enjoy, I suspect, but if you’ve been along for the ride, it’s both bittersweet and satisfying.

Even though my inner shipper is absolutely crushed by the reality of it all, Sex Criminals #69 is the last chapter that this story needed, having just sort of abandoned the planned plot halfway through and going somewhere much more satisfying, and while it’s not going to be for everyone, it’s a 5 out of 5 stars overall affair for me.  Endings are always difficult, and this book understands that, reminding us that every ending is really just the middle of something else, and I have to appreciate that.  It’s honestly a wonder this book got made at all, but I’m very glad that it did.