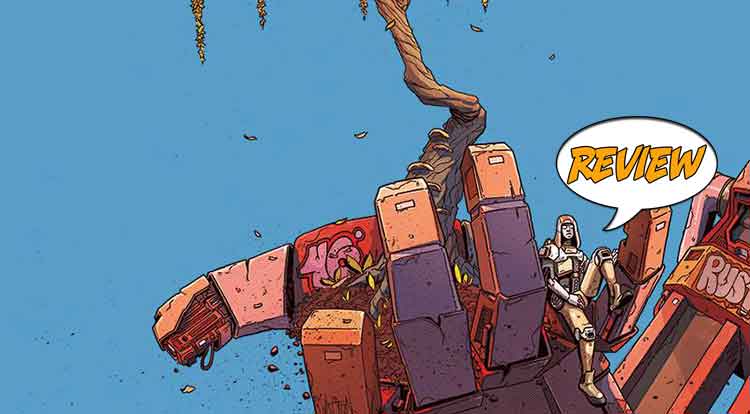 One day Evan is a novice in a techno-religious order. Years later, he’s an engineer scraping by on the fringes of society. Either way, life centers around the dormant Giga. Intrigued? Check out Giga #1 from Vault Comics! Previously in Giga: A long time ago a bitter war was fought between the huge mechs known as “Giga.” No one knows why they fought; no one knows why they stopped. No one truly knows what led them to become habitat for humanity. These origins are so mysterious, a religion has grown up around them. But, even dormant, they have a significant impact on life for everyone.

Giga #1 opens, interestingly, in the midst of a lesson for a group of religious novices who are touring a Giga. The Monsignor holds the Book of Assembly – a technical manual that is also their holiest text. Frescoes show the battle between Giga, especially the final battle between two brothers. And then there’s one showing them welcoming humans into their bodies. In a single page, we are deftly introduced to the world, the big concept, and the fascinating take of a religion that formed around these events.

The Monsignor singles out a young Black man in a wheelchair, Evan, to speculate on why the Giga invited humans to live within them. He claims he doesn’t want the young man to merely cite scripture. Evan has an interesting take on it – that humans are to Giga what our microbiomes are to us. I appreciate this link with recent science. The Monsignor then calls on Evan’s friend, Aiko, who is not there. Then there is an explosion. The Monsignor is killed, and Evan sees Aiko dead atop the Giga. Now that’s an opening!

Thirteen years later, life is quite different for Evan. He is no longer part of the religious order. His friend Mayra finds him unconscious and his chair tipped over. He has been attacked and robbed…again. He’s trying to make quota collecting scrap, like Mayra. He scans around the woods and spots a Giga. When they go up close to it, they can see that a huge hole has been torn in its central body cavity. Worse yet, whatever tore through the giant mech also killed the humans living within its body.

They head back to Evan’s place, which is in a Giga, but in a decrepit part of town. Whatever kind of world this it, it is not kind to its poor or disabled. We also get a hint about how the religious order has its spies here. This sent chills up my spine. A politically powerful religion can be a terrifying combination.

Evan has a surprise waiting for him in his sparse apartment. Mason, whom he knew in the Order, has stopped by. Mason is still in the Order and works their version of the police. Mason has brought Evan some rations. In return, he wants information. They have heard that nomad Giga in the forest are behaving erratically. But Mason is also trying to talk Evan back into joining the order.

Mason leaves, and Evan calls his friend Laurel down from where she has been hiding. Laurel appears to be a human-sized mecha, and she was hiding up in the rafters. Laurel tries to act human, but appears to be malfunctioning, and Even is hiding this from her. Then we find out that having a thinking mecha like her is illegal. But she needs repairs, and he cannot do them here.

There is another group in play – the Dusters. They also live out in the woods in a military style camp. Someone comes up on the camp – a young woman in a mecha suit carrying an injured man. The Dusters have a doctor. The injured man has a brain bleed and his friend won’t explain what happened to him. And there is derisive mention of their having some kind of guru out in the forest.

This is a gritty world rich with factions who appear to be struggling for limited resources. Except for the group in power. This sets up some fascinating dynamics.

The art of Giga #1 plunges you right into the story. It all starts innocently enough, although one wonders what happened to Evan that he lost both his legs. But the idea of making the Giga into the focus of a religion rapidly becomes the focus. It’s somehow even more chilling that this Giga is literally the equivalent of a cathedral. The subject of the religion is also its house of worship. But when Even talks, we see that this Giga is not pristine. There’s a rat scurrying about inside of it. The rat gets squashed, but we wonder if everything is as solid as the façade presented by the Monsignor, especially when that façade cracks in the explosion.

This is not a world where there are only a couple Giga here at there. The city is made up of them, whole bunches of enormous mechas sitting motionless in close proximity. They’re so huge that deep in the forest, they still appear in the hazy distance, silent reminders of a war long-fought for unclear reasons, a war that has left its mark everywhere. The forest is full of scrap as well. But when Mayra and Even find the damaged Giga, their shock is apparent – this is not something they were expecting. This is a world that is interesting, dangerous, and full of mystery.

Giga #1 is another strong opening issue from Vault. I love that it takes place after the huge mecha slug-a-thon and that we’re dealing with the aftermath, an aftermath that is much more complex than a pile of parts. The was has left scars on the humans and the Giga have affected their world view in a way that is a weird dark mirror held up to our own world.

Once part of the privileged, Evan now lives on the fringes of a society where Gigas are everything from shelter to religion.