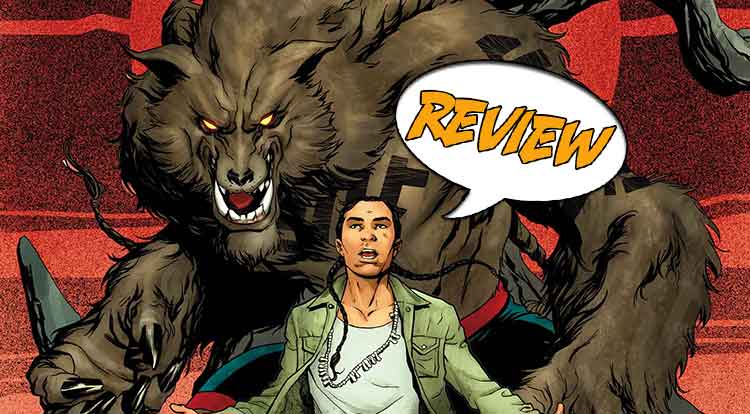 A new werewolf is on the scene, keeping an eye on the southwest.  But with U.S. Marshals roaming around and a sinister corporation to boot, it might be more than the new furry hero can handle.  Your Major Spoilers review of Werewolf By Night #1, awaits!

Previously in Werewolf By Night: A young man, a family curse, and an unholy experiment prove a dangerous combination for a small town in Arizona. All young Jake wants is to protect his people, but who will protect him from the monster within?

Werewolf By Night #1 opens with a group of hired guns from Life Pharmaceuticals taking shots at local wildlife.  A woman approaches them and informs them that they are on Hopi tribal lands.  They begin to harass her when a werewolf suddenly appears.  He runs the mercenaries off before transforming back into a teenager named Jake.  Elsewhere in the desert a pair of US Marshals are responding to reports of a teenager with superpowers.  There they meet someone calling themselves The Pathmind.  After that they are called to check out a “sighting” on the Hopi reservation. The next day Jake and his friend Molly go shopping then go to visit Jake’s grandmother Rora.  During which Molly tries to convince Jake to use his powers to takedown Life Pharmaceuticals, which Jake doesn’t want to do because he works there.  The next day at his job he’s instructed to clean out a laboratory, while doing this his enhanced werewolf senses key into something that troubles him.  He agrees to go after his employer after this.

First and foremost, Taboo (from the Black Eyed Peas) and Benjamin Jackendoff who wrote Werewolf by Night #1 should be commended for not only featuring Native American main characters, but also for avoiding problematic stereotypes while doing so. After that, my first impression is that I’m not really excited to see another evil corporation in the Marvel Universe, but I was reminded of some more recent Hulk stories and I’m willing to give this the benefit of the doubt for right now.  Also, for a first issue it manages to introduce a new character and the tone fairly well, although there are a few awkward conversations where they try to jam some backstory in and it just comes off as forced. Other than that, it’s a pretty lighthearted comic book that isn’t trying to do too much other than be a fun monster book with a slightly different angle on it.

A Bit of A Throwback

The first thing I thought while looking at the art of this book is “this would fit right in between 1988 and 1994”.  Not that that is a bad thing by any means.  Jake’s werewolf form is big and hulking,  one of the US Marshals rolls around in a sleeveless vest with his muscles hanging out, and not to spoil too much but there’s a anthropomorphic hyena with robot arms and a big ole’ gun in this.  This retro look helps push the lighthearted feel of this comic.  Other than that, like the writer, the artist Scot Eaton should be commended for managing to portray Native Americans without falling back on any stereotypes or shortcuts.

Bottom Line: Not A Perfect Intro, But It’s Fine

Werewolf By Night #1 manages to introduce a new character and scenario fairly effectively.  It unfortunately suffers a bit from forcing in backstory in awkward ways.  Ultimately though it’s a fine read with a fun retro look.  The creative team also deserve some praise for finding inoffensive ways to increase Native American representation in comics. 3.5 out of 5 stars

Werewolf By Night #1 is a decent introduction to Jake, Molly, Granny Rora, and the rest of the cast. Some of the dialog gets a little awkward. But all in all, it’s a fun and quick read.