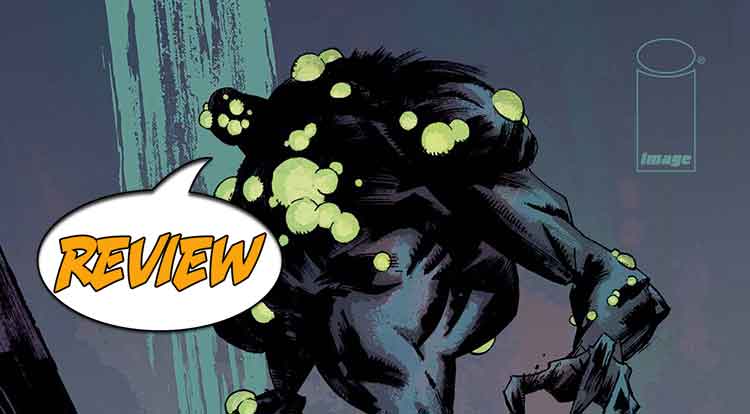 Ember finds herself face to face with a Jack and wonders again – are they monsters, or are they people? Find out more in Big Girls #3 from Image Comics! Previously in Big Girls: Ember is out on her own fighting more than one Jack and is almost grabbed when Devon and Apex, two other Big Girls, wade in. After the fight, there is the messy cleanup – people were living in that area. Tannik orders everything burned instead. Ember felt that the Jacks she was fighting were working together and they weren’t just mindless monsters. Martin has left the preserve with Gulliver, the woman running a breeding program to produce giant children. She also appears to resent the preserve. But she also takes Martin to see Angie, a woman whose son is a Jack. She meets with him every morning and talks with him – Jacks may hold onto more of their humanity than people realize.

Big Girls #3 opens on a scene twelve years in the past. Ember’s family are famers, and they are poor. If they can hold out a little longer and make their food stretch, their cattle will bring more money. A loud noise draws the father and boys outside. A Jack has broken into the barn, and he and young Ember are eating some of the cattle – they were hungry. The next day, Ember’s dad is sending her to the Preserve with a woman named Joanna (who bears a strong resemblance to Gullive). In return, he gets a generous bounty. Since then, Ember has never been home and her family has never come to see her. High Marshal Tannik has promised that he runs extra patrols around the farm to keep it safe.

Back at the Preserve, Ember has thrown herself into her work fighting Jacks. Then one night, one of them talks to her and asks her for help.

Meanwhile, Gulliver takes Martin to the core of her project, a behemic device. She knows how to use it to breed more megaorganisms. She needs Martin for his genetics by way of his blood. The gene that leads to large children is carried by men. She tells him that the Jacks physically grow very fast, but their brain development is slow. They may be huge and destructive, but they are barely children. Before she can explain further, her compound is attacked by Tannik and his troops, who take out the behemic device. Gulliver and Martin barely escape Devon’s grasp, mainly because she is directed to another problem. Now the only behemic device that remains is the original one.

Stunned, Ember lets the Jack who talked to her walk away. Apex orders her to stop him, but she hesitates. Apex goes to shoot him and Ember stops her. This puts her in direct odds with Apex, who will do whatever it takes to keep the Preserve safe!

The art of Big Girls #3 does not disappoint. I like the opening scene. It captures the hardscrabble life that Ember’s family has, which does help to explain why her father was willing to give her up. The case of money he gets for her is hard to pass up. And even though she’s his daughter, and really cute, it’s her presence that attracts the Jack who wrecked the barn. Ember is huge, but she is still a little girl, and she is being taken away from her family. This also succinctly explains the reactions we have seen that she has toward Jacks.

The fights are big and dramatic, and the full-page panel where the Jack speaks to Ember has all the surprise we need. It is yet another example where Ember’s experience contradicts what she is being taught, and it makes as big an impression on us as it does on her. The contrast between Ember and the other Big Girls, Devon and Apex, is striking. Apex is all business, seeing the Jacks as nothing but monsters and Ember’s reaction as weakness. Devon is somewhere in the middle. Her focus on Martin and Gulliver is terrifying; it’s hard to flee from someone so large.

Under the surface of all its action, Big Girls #3 is a sophisticatedly thoughtful book which does a good job at showing the consequences of dehumanizing others and the difficult soul-searching for someone who realizes where her observations contradict common knowledge.

How mindless are the Jacks, and how much humanity is hidden within their misshapen bodies?