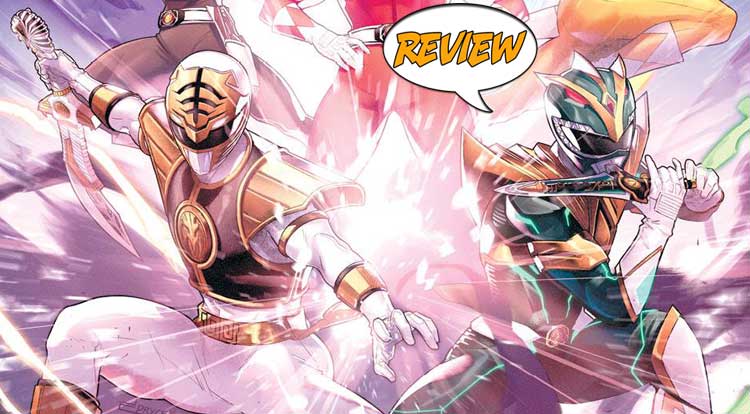 Is the world ready for a Seventh Ranger? Because the Power Rangers definitely aren’t… Your Major Spoilers review of Mighty Morphin’ Power Rangers #55 from BOOM! Studios awaits! Previously in Mighty Morphin’ Power Rangers: The Terrorzords attack and the Power Rangers have to make an unprecedented addition to their ranks in order to survive. Are you ready for the All-New Green Ranger?

With the power of the Green Chaos crystal, Lord Zedd has finally unlocked the power to really damage the Power Rangers, empowering Rita and her four goons as monstrous Dark Rangers. The battle is going poorly as the issue begins, with the Rangers getting pummeled, and things only get worse as the five villains combine into one Mega TerrorZord. The gravity of the situation causes Blue Ranger Billy to call for help, contacting Grace Sterling to put into place their doomsday plan for the worst case scenario. Grace visits the dangerous-but-incarcerated Lord Drakkon and asks him exactly what he’s willing to become in order to survive in the new world. As the Rangers find themselves on the edge of defeat, Zedd is surprised by a new Green Ranger, who swiftly and expertly takes him down, silently seizing and smashing the Chaos shard. Thanks to the new Ranger, the Mega TerrorZord is easily defeated, and the Green Ranger teleports back to Grace, who promises the unseen person in the suit that they can both get exactly what they want.

There has been a lot of discussion of Drakkon being the new Green Ranger, but this issue casts doubt on that assertion, intentionally hiding the helmetless Green Ranger’s face after Grace’s visit to Drakkon. On the one hand, I like that they’re trying to keep things hidden (especially since Power Rangers is about to relaunch with all-new #1 issues) and appreciate the way this story is structured. On the other, having it NOT be Drakkon after the build-up about whether or not he can be redeemed seems like it would be a bit of a cheap trick, making this a mystery with no real perfect answer. On the other hand, it’s an action-packed final chapter after a couple of slower ones, and brings in a character whose presence changes the Ranger status quo for the new era. It also features impressive work by Hidalgo, whose battle sequences are outright cinematic this time around, with some truly inspired moments in the Green/Zedd fights and a couple of great giant-robot perspectives that make the battle worth the price of admission.

In short, MIghty Morphin’ Power Rangers #55 ends this volume with a bang, bringing in a mysterious new character in a clever fashion, with a well-crafted story and attractive art that make it clear that readers will want to stick around for the #1s next month, earning 4 out of 5 stars overall. However the Green Ranger mystery shakes down (fingers crossed for Kim’s ex-boyfriend to be under the helmet), there’s still a lot of gas in the tank of this adaptation, and I’m psyched to see what comes next.

It’s clear that we’re supposed to think that Drakkon is the new Green Ranger, but there’s enough ambiguity that they’ might be pulling a swerve on us. Either way, it’s a nice wrap-up to the series and brings back the tension after a couple of slower issues.