Young Cable has the sword called The Light of Galador. However, he is far away on a space station when the prophecy chooses him to fight in the Contest of Swords. Find out if he can make it back in time in Cable #5 by Marvel Comics! 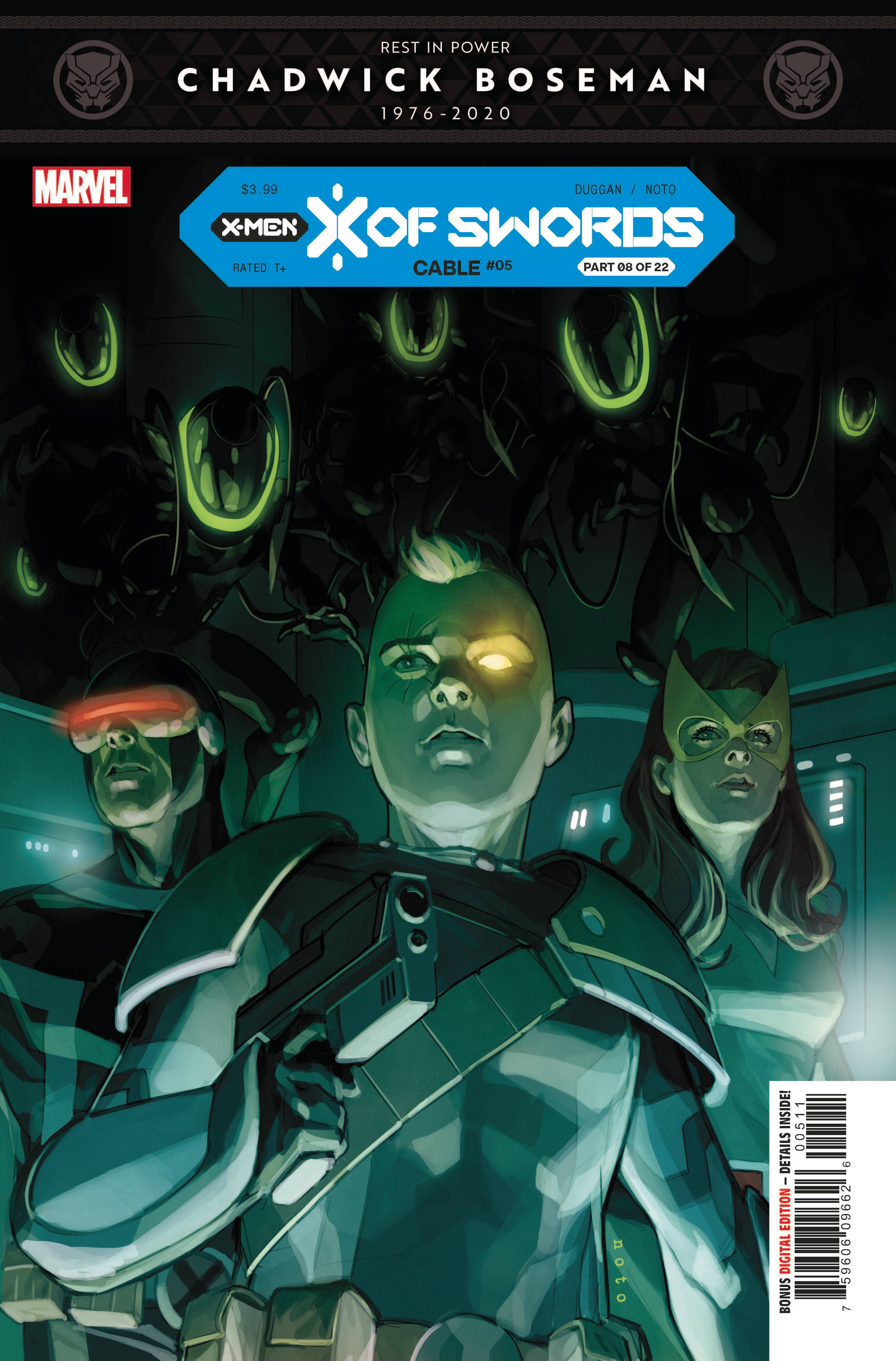 Previously in X of Swords: Krakoa and Arakko are at war with each other and it has been foretold that the conflict must be settled in a fight. Each side must pick ten champions with ten swords to fight for the future of all of Earth. Cable and his space sword are chosen to fight but he is currently exploring an old abandoned space station with his parents.

Cable, Cyclops and Jean Grey have powered on an abandoned space station using Cable’s Sword but they find it interesting that there are no people here. They opt to split up and see what they can find. Jean Grey finds herself talking to a man who claims to be a S.W.O.R.D. agent but he ejects himself into space before Jean Grey can gleam any more information besides that the enemy is something called the Vescora.

Cable and Cyclops have determined that many of the personnel here must have burned up to a crisp as there are dark markings against the wall. However, they find a portal and the Vescora begin to swarm in. The group begin to hypothesize why Saturnyne sent them here, but ultimately Cable runs to deactivate the station Cyclops lets off the full effect of his optic blast on the mass amount of creatures. Cable learns the severity of what is going on and returns back to Krakoa to take his place in the contest.

This is an appropriate book to release so close to Halloween. While there wasn’t the sense of horror and tension, some of the concepts are rather dark. The idea that these dark marks on the wall could have been bodies is terrifying if you spend a few moments to think about it. The Summers family has been very dynamic in the new Krakoa nation. They have changed the dynamic between Jean, Cyclops, and Wolverine and then made Cable young again. The status quo is turned upside down from our own expectations. Despite that, this comic emphasizes how much they care about each other. They are constantly looking out for each other’s well being and despite all the odd relationships, at its core they love each other. At the foundation of the X-Men comics, it is always about community and I am happy this event at least glances at that theme.

Man, I feel like the theme of family is one that I am not going to get over. Cable has been kind of a crazy title where he is dating all the Cuckoo’s twins and overall being a daredevil, aggressive protagonist. He is more cautious with his family and that is fairly nice to see. This duality has incredible depth that makes me want to return to the title to explore more. 4 out of 5 stars from me because of these intricate family relationships.

Cable is called to fight in the Contest of Swords but he is very far from home.