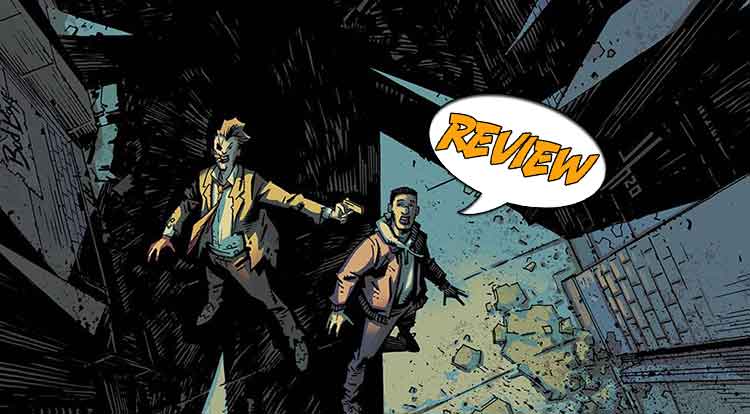 Tony and the Dead Hand have both followed the money to discover the truth about Stealth. What secrets await them? Find out in Stealth #6 from Image Comics!

Previously in Stealth: Tony is trying to find some answers and also track down his father, the vigilante known as Stealth. Stealth has tracked down the Dead Hand at his meeting in an Albanian restaurant. He is still searching for “the girl,” and the Dead Hand figures out that he is referencing events from forty years ago. This was a plot of his to build the cred of the Albanian mob. They took down Stealth, and when the Dead Hand tried to open his suit, he was blasted with the energy that wounded him and gave him his powers. He meets up with Tony, realizing that the young man is looking for the same answers he is.

Stealth #6 opens with one of Tony’s columns about Detroit, and about people. About cities being so large that to change things, it’s almost for one person to do, but people can, over time. It’s a thoughtful opening that, as it turns out, provides the underlying theme of this issue.

The Dead Hand arrives, with Schmidt and Tony along, at the house of the man who owns the properties and who left the suit inside the burning house for Tony’s dad to find. Schmidt is here under duress. Tony realizes he is probably going to die, but at least he has the chance to find out the truth first. They go up to the house, and Edward Gilbert, the man who answers the door, is young and seems to have been expecting them. He says he helped to build Stealth – and he is from the future.

They walk into Gilbert’s house. Gilbert shoots and kills the lawyer almost immediately. He had served his purpose and doesn’t need to hear any more. Tony is in shock. The Dead Hand takes this in stride, even learning that his problems stem from absorbing too much chronal radiation. Then, in the traditional of megalomaniacal villains, he explains. In the future, they found a chronal hemorrhage. Their company had a plot to take over a city. They gave Detroit a superhero – Stealth – which destabilized the police, increased gang violence, and gave people something to focus on other than the slow death of the City around them. This made it vulnerable – and cheap – to buy out. And this is the day Gilbert finds the chronal hemorrhage, which will make him rich and powerful.

The Dead Hand congratulates him and shakes hands with him, killing him in the process. (Well, there’s a twist!) He plans to kill Tony, but Tony goads him with one more chance to face off with his father. They go to the place where it started, where the Dead Hand killed the girl Stealth is still looking for. Stealth meets them there, demanding to know where that girl is. Tony confronts him and tells him that the suit is messing with his mind.

He takes off the suit, and the Dead Hand reaches for his hand, but Stealth grabs it instead, and the suit unleashes its power. The Dead Hand sees it all before he dies – sees the truth. Everything happens, but Gilbert isn’t the one who finds the chronal hemorrhage. It is here, at the site of the last encounter, the old Packard Plant, that Tony Barber discovers it. He already owns this property, and he is the one to become the entrepreneur. Can he make a difference in Detroit’s future?

For as violent a story as this is at times, it is ultimately hopeful. The time travel element, as always, can be a little confusing, but I like the way it acts as a reboot, as an opportunity to do better this time.

BACK TO THE BEGINNING

Stealth #6 has some wonderful bookends in the art. The opening page, underlying Tony’s column, features scenes of Detroit showing people living their lives, showing some of the images of what made the city great. And it closes with Tony’s epilogue, as he leaves the paper to reinvest in the city, to bring people together, to build it back up.

Sandwiched in the middle is the rest of the story. The Dead Hand, already badly injured, with half his face almost down to the bone, is disheveled and blood covered. Tony has been through a lot – he is overtired, in shock, and beyond feeling. In contrast, Edward Gilbert is the quintessential clean-cut, young, overconfident rich man. His callous, greedy plans take full advantage of manipulating people to get what he wants. I kind of like having someone like this as the surprise bad guy behind everything.

As the close of the arc, I really liked Stealth #6. The time travel and the resolution are a little bit circular, but I can forgive that because instead of being doomed to repeat the same events, Tony has the opportunity to tweak the upcoming future. I also like setting this in Detroit, a city that has virtually died and is trying to rebuild.

Tony discovers the truth, a truth more complicated than he had ever expected.