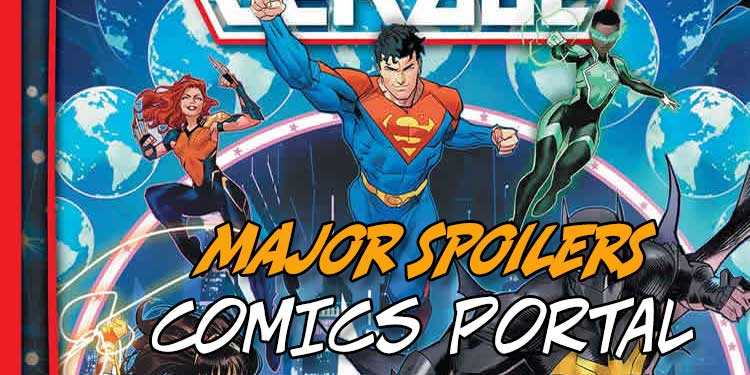 When you’ve read comics as long as I have, you notice trends and events that keep repeating themselves. The most recent is DC Comics yet again going “back to the future!” Here’s the most important paragraph from the aforementioned article:

This sounds hauntingly familiar. Could this be what was originally planned as replacing the DC titles in the 5G or “Generations” event not so long ago? Maybe DC had these stories in line to happen and decided to give them their shot in the beginning of 2021.

As intriguing as many of the books sound, I’m still glad they didn’t just clean house when it comes to their regular titles and replace them with these. If they wanted to make a “future-verse” where these stories exist on a regular (or irregular) basis, I’d be cool with that, although I know a lot of folks who want ONE universe and ONE universe only. Not me! I remember the days of DC’s “One Million” event where we peeked into the future in year 1,000,000 where the events coincided with what’s going on today. I liked it. I wouldn’t mind seeing more about that time, but I’m also okay if we don’t go back there. Then, too, DC jumped ahead one year not that long ago, and some of what they introduced was good, but I’ll never get over Catwoman having a baby. Thankfully, they’ve basically ignored that in DC continuity since then.

What worries me is that this “DC Future State” event could travel down that same road. We’ll see. To be fair, I’m also not that excited about Marvel’s “King in Black” event EXCEPT for the fact that my guy, the Black Knight, is getting a book. I’ll be buying that, of course! The rest, probably not!

Of course, some continuity buffs are out there trying to see how these various DC futures all work together somehow. Good luck with that!

What intrigues me most about “DC Future State” is, of course, the Batman arena. Here’s the description of this from that previously mentioned release:

“In this future, Gotham City is controlled by the Magistrate. This villainous regime has taken control of the city, now under constant surveillance. All masked vigilantes have been outlawed and Batman has been killed. But led by an all-new Batman, a new assembly of Gotham’s guardians rise to give hope to all of those who lost it!”

Instead of Batgirl, there is “Batgirls,” which reminds me of that animated Batman movie about their version of Batwoman. I’m also interested to see what John Ridley has in mind for “The Next Batman,” who apparently is not Terry McGinnis. Well, again, we’ll have to wait and see about that.

OTHER IDEAS OF INTEREST The Flash sounds like a fascinating, although limited, story. I understand that there’s only one speedster with connection to the Speed Force, and that one (it’s Wally West, but I didn’t tell you that, okay?) is fighting the rest.

The Justice League also has some curious elements in it:

“A thread of great change runs through the Justice League heroes: a new League is built upon secret identities (even from each other), but an old and evolved enemy will use these secrets to try and overthrow the world. For the supernatural heroes of Justice League Dark, the very fabric of reality has shifted, and heroes are being hunted.”

This is how the Justice League originally worked, with their identities truly being “secrets” from even each other. I’ve missed that aspect of it, so I like that they are reviving that here. I just hope it’s not Ra’s Al Ghul again with the secret identity thing! We did that already!

DC does this kind of thing every once in a while, and I’m good with it being temporary. Apparently, even DC thinks it won’t replace their current books because, as we can clearly see, they’re going back to the “present” in March.

Beside Ridley, I like many of the choices of creators in “DC Future State.” Matthew Rosenberg, Joshua Williamson, Ram V, Paul Jenkins, Becky Cloonan, Mark Russell, Steve Pugh, Joelle Jones, and Brandon Vietti stand out to me. I’ll be curious to see how these all work.

I’m particularly looking forward to scripter Phillip Kennedy Johnson taking on Superman. I happen to know he’s a big fan of the Man of Steel, so I’ll really be anxious to read Superman: Worlds of War.

When anyone does this kind of thing—stuffing different people into familiar costumes and powers and such—I have to wonder why they just don’t create new heroes instead!

I guess with the success of Far Sector, DC is more likely to rework established heroes, but I don’t think every good and possible successful character has already been created. I’d still like to see comics cover new ground instead of trying to rehash older people and such.

I don’t mind glimpses into a possible future with characters or identities we already know, but I truly believe there are many more heroes and the like that we haven’t seen yet. Let’s try something NEW for a change, okay?

What do you think? Do you plan to buy “DC Future State?” Do you plan to buy Marvel’s “King of Black?” Do you like events like these, or do you prefer monthly titles that tell longer stories instead? Whatever your opinions, please share your thoughts in the space below!