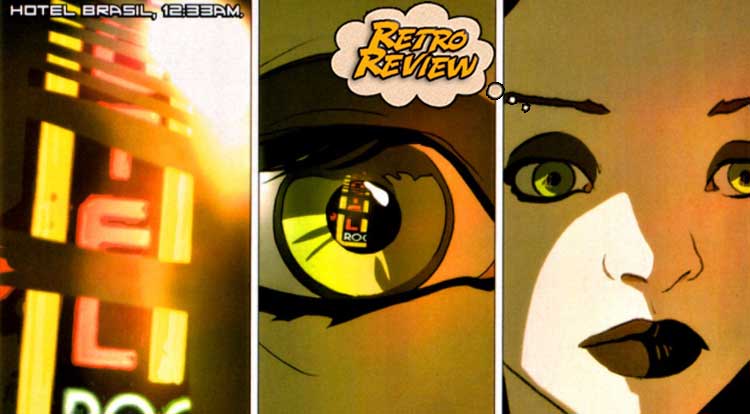 They call it ‘Early Installment Weirdness’ and Laura (X-23) Kinney has a big ol’ heaping bowl of it.  Your Major Spoilers (Retro) Review of NYX #3 awaits! Previously in NYX: NYX began as the story of Kiden Nixon, a young mutant whose life falls apart when her powers develop.  She ends up running away and living in the streets of New York, where she meets other young mutants who collect into an unofficial grouping.  Kiden’s powers give her strange visions of the future which lead her to people who need her help, something that is about to happen again. Sadly, the creative decisions of 2000s Marvel were aimed more at creating controversy and outrage (see also ‘Marville’, ‘The Ultimates’ and the Freedom Ring arc of ‘Marvel Team-Up) than actually focusing on storytelling, which is why we see cartoon hero X-23 debuting as an underage prostitute in a skeevy hotel in New York City.  Worse still is the nonsensical way that the script addresses her status as a clone of Wolverine, with her John throwing her a wad of cash and “complimenting” her. This sequence is distasteful for a number of reasons, even if you’re sex-work-positive, but the most off-putting part of it is how matter-of-fact and dull it is, as though the only point to including the sequence was to create pearl-clutching moments and get people talking.  Laura was, after all, a cartoon star first, and having her show up in such a squalid setting could conceivably have become a powerful moment that made a statement.  Instead, we get a stereotypical abusive 70s pimp and some very familiar story beats. We get to see a truly stomach-turning brutal sequence of the pimp beating another of the girls, while Laura sits passively and watches, SOMEHOW slicing more lines in his ever-healing flesh, though she hasn’t got any obvious blades.  (Foreshadowing is your key to quality literature.)  It’s just gross on a number of levels.  During her side of the story, Kiden has a vision that she needs to show up at the Hotel Brasil after having saved someone else whose hospitalization takes up a big hunk of the story.  Since her vision involves a man’s murder, she immediately sets out to find out what’s going to happen and perhaps save his life.  I have to say I like Joshua Middleton’s art in this book, with it’s soft edges and earth-tone coloring really selling the “realistIc” world that Quesada is trying and failing to build with his awkward scripting. I truly, TRULY hate the Disposable Sex Worker trope and having this story slide down the hill into that makes it go from forgettable to just plain inexcusable in record time, no matter how attractive the art is.  Of course, when Kiden arrives, she finds that Laura Kinney isn’t quite as disposable at the story wanted to make us worry she might have been. My memory wants to say that X-23 is supposed to be fifteen in this sequence, though I scoured the book and all the material I could find and there is no actual confirmation of that fact.  Either way, this entire issue is a big “No” from me.  NYX #3 is a book that desperately wants to have the grittiness and reality of ‘The Wire’, but ended up a poorly-conceived Christi MacNicol after-school special, and no amount of Middleton talent could make this script work, culminating in a disappointing and skeeved-out 1.5 out of 5 stars overall.  There have been comics that were quantitatively worse than this one, but this is one of the rare few that makes me want a shower after reading it.

This comic exists only for shock value. You do not want it.