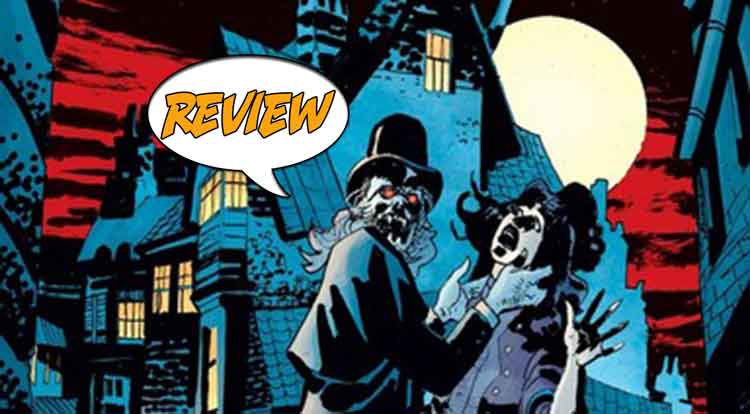 In REDNECK #28 from Image Comics, the Bowman’s have found refuge from a world that fears them, deep in the heart of Texas.  But others of their kind, harbor hopes of re-establishing vampiric dominion over the Earth and its people.  The Bowman’s can hide, but they cannot run from the apocalypse heading their way.  Read all about it in your latest might Major Spoilers review! Previously in REDNECK: the Bowmans, a family of vampires who sustain themselves on cows’ blood, have laid low for generations, trying to live normal lives.  But nothing stays the same forever, and soon their secret is uncovered.  Forced to flee, the Bowmans now have to make their way through a hostile world, a world deep in the heart of  Texas…

As an aside to this review, I would like to recommend a six episode UK series from the 1990s, called Ultraviolet.  It takes a hyper realistic attitude to the depiction and treatment of vampires in a modern setting, but not only that, it is a fantastic series worthy of more attention.

I mention Ultraviolet in this review, because REDNECK #28 evokes the same feeling – deep world building, a fascinating array of characters, and a sense that there is something larger happening on the margins of the story than the reader/viewer suspects.

REDNECK #28 is a wonderfully entertaining issue of this long running series.  What started out as a low key story about a family of vampires who’ve gone native and are hiding in plain site, has morphed into a story of some mythic grandeur, featuring ancient vampires and monsters from a time when the Earth was their wonderland, before humanity rose and almost wiped them away.

This issue, apart from some interesting character moments, also looks back at the history of the vampires, and their Parliament, and how vampiric civil war almost brought them all undone.  Writer Donny Cates has done a fantastic job of blending the mundane and the supernatural in this issue, opening with a diary entry by Perry, new sheriff of Asilo Del Muerto, detailing how the Bowmans have settled into the sleepy Mexican town.  It’s a great way to catch the new reader up with what’s been happening if they are new to the series or missed issues.  It also allows the reader a sense of the normalcy the family has achieved, which, having read the rest of the issue, will soon be torn from them.

Vampires get a bad rap these days.  Along with zombies, fiction editors don’t want to have anything to do with them.  The sub-genre is played out.  Perhaps that is over familiarity?  After all, Stoker’s Dracula is now well over a hundred years old.  Perhaps the Twilight series is partly to blame, stripping vampires of their innate savagery and replacing it with a brooding emo sense of romance that played well with the teenagers a decade ago.  But if done right, vampires can be an exciting addition to the horror genre, filling pages with an epic sense of mythic doom.  REDNECK #28 taps into that, especially in the latter pages.  There are links to history, with Jack the Ripper blamed on a vampire (I’m not especially keen on real life atrocities being blamed on supernatural agency, but that’s the writer’s prerogative).  This event leads the the schism between the vampire people which is wonderfully rendered by artist Lisandra Estherren.

Indeed, Estherren’s artwork is the highlight of REDNECK #28.  Estherren’s scratchy style is really suited to the story, with lots of jagged edges and a sparse sense capturing the nature of the vampires and the desolate hellhole the Bowmans have sought sanctuary.  There is a battle scene towards the end which is lovingly rendered in all its chaotic, bloody, mythic quality, and is worth the price of buying this issue.

As someone who has come late to the REDNECK series, I am very glad to have at least come to it now, and with such a stand out issue.  The sense of savagery and myth that Cates and Estherren evoke in this issue makes it a compelling read.  Cates has created a compelling backstory and cast to fill it, and this is another series I will be seeking out.

REDNECK #28 sets the scene for future issues, as the vampire Lord Demus starts the process of reclaiming vampire dominion over the world. While the Bowmans are tucked into a place of refuge for now, there is the overwhelming sense their quietude is about to be washed away in a rising tide of blood.