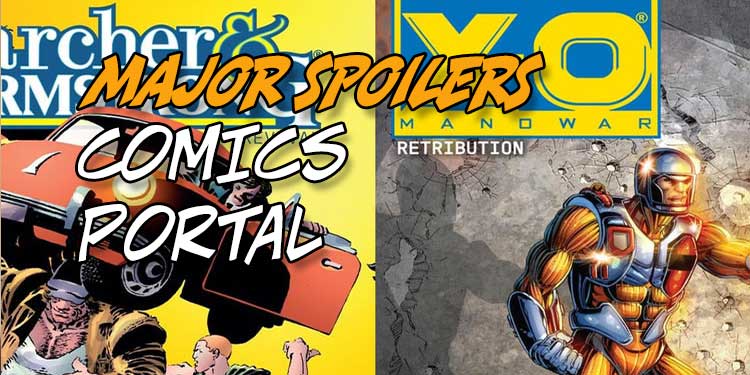 I always appreciate the comics news here on MajorSpoilers.com, and I read the recent news release about Valiant Comics reprinting several of their classic stores. I like that, so let me tell you why! Here’s the sentence that grabbed me from that article:

“If you love reading classic comics, Valiant Entertainment has you covered with the Valiant Classic Collections.”

The books they are reprinting are indeed classics, including early Archer & Armstrong as well as X-O Manowar. Both of these were great comics that helped make Valiant not only a legitimate comics company, but at least a contender for the best!

I’ll say it yet again—I simply don’t understand why Valiant isn’t one of the top-selling comics producers around! They have well-developed characters doing interesting and compelling things in stories told by some of the best writers and artists. I particularly enjoy X-O Manowar because it’s a twist on Iron Man—a barbarian with access to high tech is unpredictable, so I want to see what happens next! They’re slowly getting into movies and TV, so I’m hoping we’ll see even MORE Valiant goodness moving forward.

Of course, these books are so worth having for several reasons!

I GOT THESE ALREADY! What if you have these books already?

I recently pulled out my collected edition of DC’s Watchmen to dive into it again after watching the fascinating HBO sequel. I was horrified to see that the pages had yellowed and some of them were starting to fall out when I began to read it. Time does that to comics, especially trades, which I haven’t been bagging and boarding! They’re not collectible, after all! And the book was decades old, too!

Granted, I could easily buy a digital copy of this trade online and read it. But I’ve lost digital files over time when my computer crashed or the files themselves became corrupted.

It makes sense to, every once in a while, reprint the particularly good stuff for those of us who like paper copies to read.

If there’s a story I REALLY want to have in good condition, I will buy it in hardcover when it becomes available. Now, those I have to know I want right away because they usually will be the first editions to appear. These are for the “hard core” fans (I get the pun) like me who want great books to keep around. For instance, I have early ElfQuest in hardcover, the Parker books with art from Darwyn Cooke, Rust from Royden Lepp, and Gotham Central, among others. They are all just waiting for me to take them down and dive into them again when the time is right.

Every once in a while, I end up with some extra spending money. I will often ask for recommendations from the store owner I’m frequenting. Once I was at a shop and the owner said I should get into The Walking Dead. I caught up by buying trades of the early issues.

I took them home and read them. I was hooked! The good news was that I could catch up easily and make the comic a monthly habit.

While comics companies want to make money by selling trades, of course they want to attract fans who will buy new stories as they come out as well. On some level, then, trades also serve as advertisements for the newer books that come out featuring those characters.

ISN’T THAT THE PURPOSE OF A TRADE, AFTER ALL? I have several friends who only buy trades instead of what we call “floppies” or single issues. With the current style of writing for these collected editions, they say they get more story that way. They have much more patience than I do, apparently.

Trades are, in the purest sense, reprints anyway, aren’t they? If you miss an issue or, like me, often are late to the party, you can buy trades to get on track.

Interestingly, as I mentioned previously, trades aren’t collectible, though. I looked around and asked several people in the business which trades are worth more now than when they were released, and they responded, “Huh?” That never happens, in fact! If you want a book purely for reading purposes, it should be a trade! It will never increase in value!

I have seen both Marvel and DC release collections of “classic” stories in black and white and on newsprint paper, in fact, to reduce costs and increase their profits when reprinting them. Many fans new to comics pored over them for a long time, although I’m not sure they are still being printed these days. If they aren’t being replenished every so often, they should be, in my opinion! The trouble many trades run into is that, if the stores aren’t recent ones, the book doesn’t sell as well.

It wasn’t all that long ago that DC printed Batman stories from the very beginning in collected editions. I bought several of them but even I, a long-time Bat-fan, eventually stopped buying them when they got to eras I wasn’t all that interested in.

I believe it’s better to collect those “classic” stories rather than simply reprint the entire run as DC did. Of course, sales numbers told DC that, I’m sure. They don’t print them any longer!

On the other hand, Marvel’s been re-releasing collected classic X-Men stories recently, so clearly this works!

I give a pat on the back to Valiant, and I will be picking up those classic collections when they appear! I hope Valiant continues this practice and that even more companies will return “classic” stories to our LCS shelves!

What do you think? Do you buy collections of classic stories? Do you have collected editions you’ve had to replace when they were no longer in good condition? Are there classic stories you feel should be reprinted? Whatever your opinions, please share your thoughts in the space below!