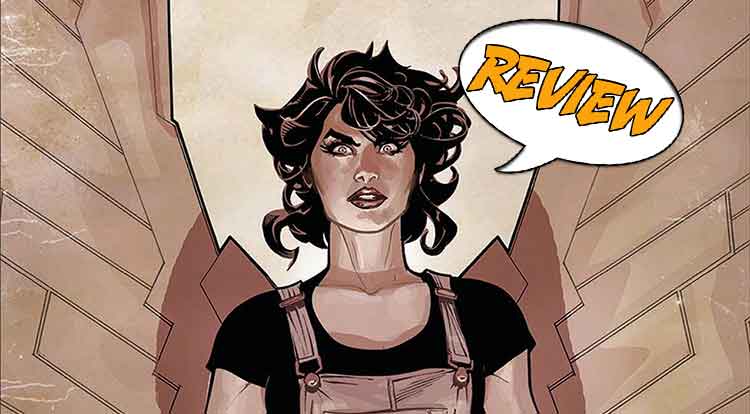 Claire Connell has changed and developed new strength and skills, at the cost of some of her memory. Can she find out more about what has happened to her…and why? Find out in Adventureman #4 from Image Comics!

Previously in Adventureman: Claire Connell has undergone some remarkable changes. She is several inches taller than she used to be, her hearing loss has improved, and she is slightly manic. Her family take her in to the local ER, and after her own workup, she gives a field transfusion of her own blood to a dying man – a skill she never used to have. She doesn’t remember anything that happened after she found the Art Deco style skyscraper at the address of the Adventureman headquarters (from the stories.) In the meantime, Baron and Baroness Bizarre are working diligently to break out of wherever they are, and into the real world.

Adventureman #4 is charming in the way it seamlessly blends pulp-style heroics with a healthy dose of realism. It grounds us but is also played for humor. Claire Connell races through the city on her scooter and physics kick in. She’s a lot taller than she used to be, and much heavier, and besides having to ride standing and leaning over, it blows her tires. When she leaves it and walks, her sense of personal space is out of whack and she bumps into people. See what I mean? Real world problems.

But on her way, she spots a thief stealing the luggage of some tourists and the heroics kick in. Claire chases him down, scolds him, gets the bags back, and has time for a few kind words with the tourists. The exhilaration gets to her and she runs the rest of the way across town to the skyscraper. The Adventureman movie she watched triggered her memories; arriving here, she remembers Jim, who lets her in, and then it all starts coming back.

And there’s much more to the story. Jim is Gentleman Jim Royale, one of the heroes from the past. What happened with them then ties into what is happening now, and it’s quite clever. Baron Bizarre was poised to take over Earth, and Gentleman Jim used two powerful magic items, the Judas Press and the Obliteration Bible, not for personal power but to erase the world. The heroes didn’t die, but they were all forgotten, so forgotten it is as though they never existed, along with their enemies. But the flaw in the plan, he now realizes, is that Baroness Bizarre is no longer in the Ultravoid and is poised to return, only there is now no Adventure Incorporated to stop her.

Claire has an idea that it may not be as hopeless as Jim thinks. In a lovely parallel, we cut to Tommy with the rest of the family. They’re trying to figure out where Claire is, and he finds a possible answer in an old Adventureman story. That story hinged on the importance of remembering the ones you love, and those you love you. Friendship is the strongest power in the universe, and he wants his family to use this power to locate his mom.

The art of Adventureman #4 continues to be lively and beautiful. This is an issue that moves around a lot. It would be easy to get lost trying to follow the threads, especially since we start out with a main character who barely remembers any of the events of two issues ago. We see Claire being joyously heroic, doing things that feel right to her without any explanation as to why. But as slowly and steadily as the assembly of a jigsaw puzzle, we come to see the big picture. The words alone would sound terribly confusing, but with seeing the characters and their expressions, being able to tell past from present, everything starts sliding together.

There are several moments where we see panels in close proximity reflecting the world of Adventure Incorporated in the past and the world of today. It’s a lovely device. There is enough similarity that we can recognize we’re looking at the same place, but two different versions of it. And I love that alternate past version. Like a sci-fi movie from the past, the skies are full of airships and small planes that wind their way among shining, stylish skyscrapers. It is like peeking in at a lost world.

Adventureman #4 is terrific. There is plenty of action, drama, and suspense drawn together by thread of optimism and genuine affection. Everything is starting to make more sense through revelations that seem natural. This book is a whole lot of fun.

Is Adventure Incorporated too thoroughly forgotten, or can Claire Connell breathe new life into it?