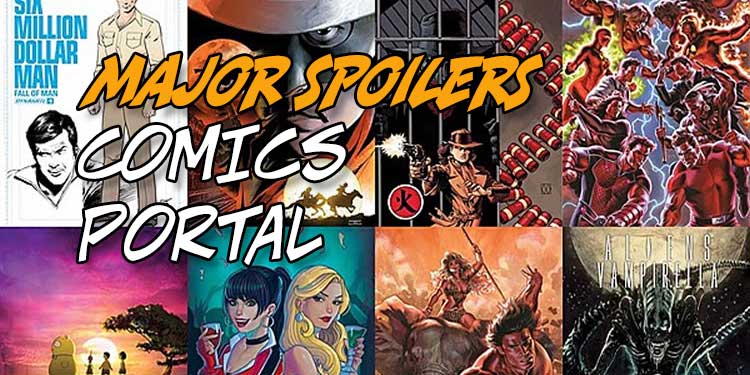 I read with interest the recent news release about Dynamite making all the comics ordered through November returnable. That’s a big deal!

Here’s the important paragraph from the aforementioned news release:

“As the challenges affecting the comic industry and world at large continue, Dynamite is extending the timeline for returnable titles into the holiday season. The new window now stretches to comics with a November 25 in stores date, and those on November 2 Final Order Cutoff.”

Why are they doing this? This is the reason why:

“Dynamite acknowledges that all of their deeply valued retailer partners are in different individual situations, based on local laws, health and safety, and business environments. To support all those on the ‘front lines’ selling comics week in and out, and continue the vibrant recovery efforts, Dynamite is stretching returnability options once more.”

Some fans don’t understand why shops want comics to be returnable. Simply put, if a store doesn’t sell them (or sometimes are damaged beyond the ability to sell), they want a refund, so they send them back.

THE IMPORTANCE OF RETURNABILITY

I’ll try my best to explain why being able to return a comic is important to many local comics shops. However, if you want to clarify or add to something here, please feel free to respond in the space below. Remember, though, I’m not a retailer, just a fan!

In the comics industry as it currently stands, stores get the Diamond Previews magazine (and now other order lists) two months in advance. So, a book coming out in December has to be ordered NOW, during October.

This means that many store owners (or an employee who does the ordering) has to get a good idea what will sell months before a book arrives. This is particularly tricky with number ones. Before the number one issue arrives in a store, they have to order number two (and sometimes even number three).

Since not many LCS’s have psychics on their payroll, they often ask customers to fill out forms to show what they will buy before they arrive. If your store makes you fill these out on a regular basis, that’s because they’re trying to keep up with the changing orders. This is particularly helpful with mini-series and other limited books. Some of these come and go so fast (including being delayed) that the stores have placed their orders long before the books arrive to be sold.

I do have to hand it to many shops because they do a fantastic job of ordering because they get to know their customers. Some even know them so well that they will order items without being told by the customer that he or she wants it. A good example happened with me when my LCS ordered a Batman: The Animated Series statue that cost about $200. I had missed it in the lists of upcoming items, but the owner KNEW I would want it. I was grateful she did order it for me because I DID want it!

The bad news is that sometimes even the best of orders go astray. Just because a well-known creator makes a comic or related product doesn’t mean it will sell well. For instance, John Byrne’s name on a book used to be the gold standard, and those comics sold like crazy! Now, sadly, I don’t see his name on comics being listed for sale anymore. I guess it depends on if you are a fan of his or not to decide if that’s good or bad news. (Hopefully I’m wrong on this one!)

Also, some stores like certain companies. I can think of a certain group of stores near where I live that is big on Image comics. They order plenty and even promote them prominently when you first walk in the door.

Suppose an Image comic gets ordered, but some bad news about it or one of the creators comes out before the product actually arrives at the store. Depending on what’s going on, fans may treat it like it’s molten lava, not wanting to touch it. The shop has copies of it, and they just don’t sell. Many LCS’s are literally hanging on by a thread financially. I’ve had many LCS owners tell me that they’re happiest when they sell through every comic they ordered each week. That way, they can pay the bills!

I once saw a shop that had ordered boxes and boxes of New Titan Titans from DC when that book was popular. The owner told me they knew the collectors would buy them if no one else did. A few months later, there was a flower shop in the same space.

What stores often need to do if a book doesn’t sell is return it. Often Diamond or other services will refund at least a portion of the money spent on it. That can mean the difference between being able to open your doors or not.

Not every book is returnable, though. If a lot of stores ordered a lot of comics, then they all tried to return boxes of them, well, the industry couldn’t bear that burden for long.

IT MAY GO BACK TO THE PUBLISHER

What Dynamite is basically saying here is, if any of our books that you have ordered through Diamond don’t sell during this specific time period, you can send them back to receive a credit.

Not every company can afford to do that, of course. (I’m even sure Dynamite hopes that not TOO many of those issues actually get returned.)

What this does is give local shops some breathing room. If they order books that don’t sell and can be returned, some of them will take a chance on ordering them or increasing an order they have already placed. Hey, if they don’t sell, they can return them, after all!

Granted, no shop wants to return ANY book if they can. They would much prefer to sell it and make some money. But sometimes ordering comics, especially those coming from companies that are not “the big three” can be risky. Collectors may dive in and suddenly want every copy they can get their hands on because, for some reason, a book goes “hot!” However, shops just can’t depend on that because it is such a fluid and unpredictable thing!

They also need money to pay their bills, too, after all!

The important thing is that Dynamite (and other companies doing this as well) is trying to take some of the burden off local stores while helping to make it easier for those shops to order and sell their product.

I applaud these efforts! Granted, the book I currently buy from Dynamite is their Green Hornet series. I don’t pick up Red Sonja or Vampirella, for instance, but I know fans who do. They certainly appreciate being able to buy these comics and that stores can take a chance on them so they can pick them up as well!

So, well done, Dynamite! And kudos to any company that is reaching out to local shops and helping them make it through this trying time! Keep it up!

What do you think? Do you fill out pull lists for purchase at your LCS? How often do you change your mind on buying specific comics? Does something like this news make you more open to buy from that company? Whatever your opinions, please share your thoughts in the space below!