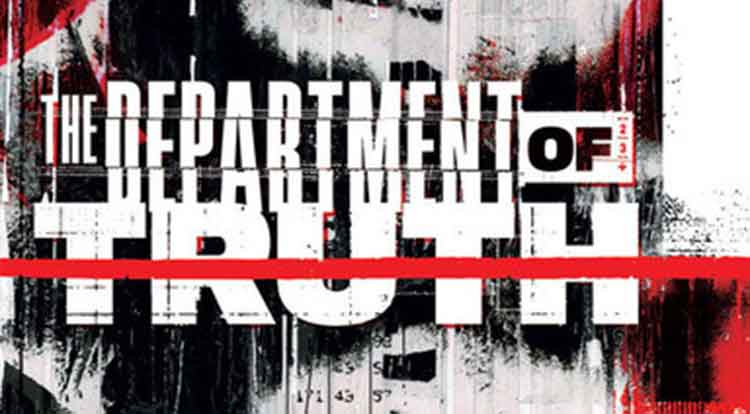 The Department of Truth #1 Review

In THE DEPARTMENT OF TRUTH #1, Lee Harvey Oswald comes clean in 1963, and FBI trainer Cole Turner discovers that everything he thought he knew is simply a matter of faith. Is the world really flat? Find out in your next mighty Major Spoilers review! THE DEPARTMENT OF TRUTH #1

Previously in THE DEPARTMENT OF TRUTH: There have always been conspiracy theories, from when the Apostle Thomas wouldn’t believe in the risen Christ until he could feel His wounds, to the alleged benefits of hydroxychloroquine in fighting covid19.  We all want to believe in something more than our humdrum lives.  As the 20th century rolled along, the conspiracy theories spread, and grew wilder.  It wasn’t enough that the Americans faked the moon landing, it was that Stanley Kubrick stood behind the lens, filming it.  So what happens when more and more people believe in nonsense?

UP IS DOWN AND DOWN IS UP

Right now, as I write this, the American President is in quarantine after his positive Covid 19 diagnosis.  Already, my twitter feed is filling up with a variety of theories, all along the same lines, that he isn’t actually infected, or that he is but he’s receiving treatment denied to the ‘little’ people, or that he isn’t but pretending he is and will come out in a week or two to claim a miracle cure and coast to victory in November.  Indeed, as I pause to check Twitter, the rumors are growing wilder and wilder.

What happens if enough people believe a lie is actually the truth?  Does the lie fade away if faith defeats it?  And what happens to the world when the fantasy begins to morph into reality.  That’s the central conceit behind THE DEPARTMENT OF TRUTH #1, which is an exceptionally strong opening issue.

FBI instructor Cole investigates conspiracy theories.  When he attends a Flat Earth Society convention in Washington, he is quickly drawn into the orbit of two right wing billionaires, who take him on a plane flight that will change his entire life.

A delightful strain of ambiguity floats through THE DEPARTMENT OF TRUTH #1, from the opening pages all the way to the surprising revelation at the end.  As someone who marinated deeply in The X-Files during the 1990s, THE DEPARTMENT OF TRUTH #1 is very much my jam, an entertaining mixture of nonsense brought to life with deadly earnestness by writer James Tynion IV and artist Martin Simmonds.  Indeed, Simmonds’ art is the real hero of this story – for a comic about facts morphing into lies, the imprecise nature of his art, the blurring of lines, the spatter of pattern obscuring reality, the sheer sense that everything we know is totally unmoored, really brings home how reality is totally fluid.

Conspiracy theories are alluring.  It gives people a measure of self control, that if they dig deep enough, they’ll uncover the true nature of reality.  That the world, in all its unfairness, can actually be explained and by being explicable, is controllable.  QANON, the Birch Society, what really happened at Ruby Ridge – all of it is about taking back control from the faceless elites who are controlling our lives.  Even when the faceless elites are some of the worst propagators of conspiracy theories…

AN ALL SEEING EYE

THE DEPARTMENT OF TRUTH #1 takes a deadly earnest approach to the nature of conspiracy theories, while lacing it with some knowing humor.  When Cole comments that the Flat Earthers buy maps and models ‘proving’ their theories to place next to their signed comic books, Tynion is winking at his readership.  Opening the issue with a flashback to Dealey Plaza in 1963 takes up back to the ur-conspiracy theory of the 20th century – who killed JFK, which undergirds much of what is happening.

The revelation about what is actually happening to Cole, why he was selected by the billionaire brothers, and what the old man and the woman from the Department of Truth have in store for him indicate that this is a series that will take its readers on the wildest of rides, as the battle for truth over lies spills into what we amusingly call the real world.

BOTTOM LINE: TRUST NO ONE

THE DEPARTMENT OF TRUTH #1 is a strong opening issue to a series that rides the zeitgeist harder than most in 2020.  When more people believe the lie than the truth, what happens to the reality around us?  Do we become the anomaly?  And who is on hand to fight for truth, justice and the American Way?

The Department of Truth #1

A neat summary of the dead end America has blundered into in the last few years, THE DEPARTMENT OF TRUTH #1 is a clever blend of knowing writing, and some glorious artwork. Come for the conspiracy theories, and pray that the liars never win.