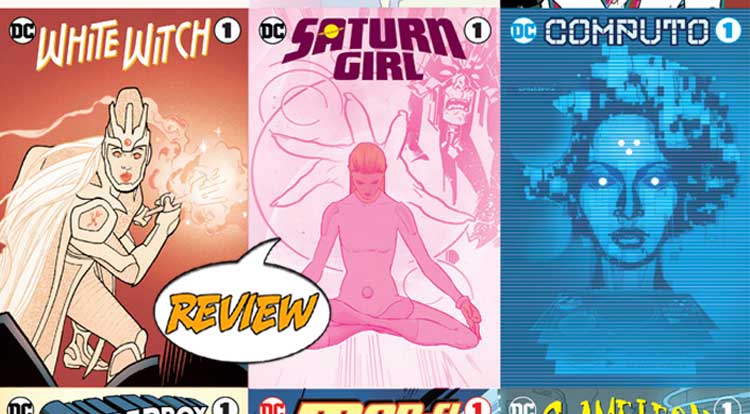 The trial of the Legion concludes…  Will our heroes like the outcome?  Your Major Spoilers review of Legion of Super-Heroes #9 from DC Comics awaits! This issue opens with both Shadow Lass and President RJ Brande announcing that the trial of the Legion will continue, with the President introducing the audition tapes of several Legionnaires (Dawnstar, Wildfire, Monster Boy and Bouncing Boy, who is revealed to be DOCTOR Charles Foster Taine in this reality), all of whom seem to have ill will towards the idea of the United Planets,  Shadow Lass counters with Timber Wolf’s audition, then Invisible Kid gives his own testimony (without ever becoming visible, which hasn’t quite become annoying yet, but could in the short term.)  Then, Crav, the General Nah arrives to declare the whole thing a farce, until Dream Girl reveals her reasons for joining the Legion: A Great Darkness is coming.  Doctor Fate and the White Witch both weight in, one publicly and one keeping her own counsel, while Triplicate Girl debates among herselves reasons why they/she should stay.  White Witch actually tricks Nah into admitting that he wants to take over the UP, leading to his apprehension by Gold Lantern and the announcement by the President that the trial is over.

I’m actually relieved that Brande isn’t the corrupt official that she seems to be, as she announces that the entire trial was designed to show that the Legionnaires were going to live up to their principles, and they passed with flying colors.  The spotlight moments here feel a little bit overdue, and while some of the artists’ decisions are puzzling (Grell chooses to draw Cosmic Boy, Saturn Girl and Dawnstar in their distinctive 70s costumes), there’s not a boring page in the issue.  Even hot-headed Mon-El storming off feels like it makes sense within the context of the story being told, and certain pages are absolutely beautiful to behold.  There are still unanswered Legion question (and one green-armored person who I still haven’t been able to identify), but this issue goes a long way towards explaining this Legion incarnation’s raison d’etre.

Oh, and the issue ends with a kiss between perhaps the last two Legionnaires you’d ever have expected.

BOTTOM LINE: STARTING TO FEEL LIKE AN ACTUAL LEGION

In short, Legion of Super-Heroes #9 provides the kind of moments I had wished were part of the first arc, with a literal legion of artists delivering on a galactic canvas and a story that finally seems like it’s big enough for a team of this size, earning 4 out of 5 stars overall.  There is a novelty aspect to a single book with twenty-plus artists in play, but Bendis’ dialogue and plotting pulls this one together nicely, setting us up for whatever comes next in fine fashion and giving me the gift of Doctor Bouncing Boy, for which I’ll be forever grateful.

They had me at Doctor Bouncing Boy, but this issue really fills in some gaps and feels as tense as it should. Well-done all around.