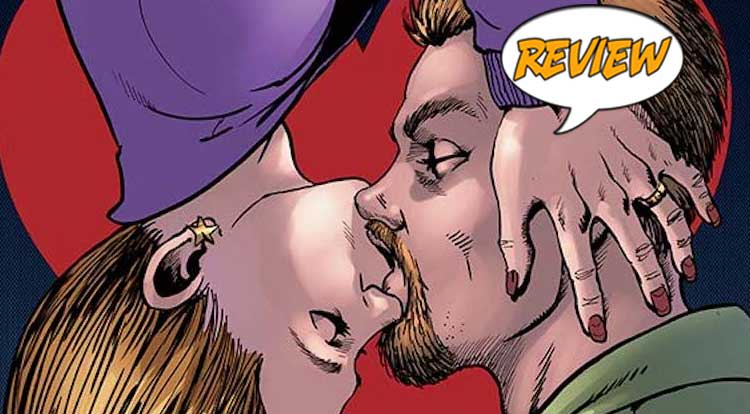 Butcher’s diary holds more secrets, and Wee Hughie is keeping them from people he shouldn’t…  Your Major Spoilers review of The Boys: Dear Becky #5 from Dynamite Entertainment awaits! Previously in The Boys: Dear Becky:  Hughie gets a glimpse of what married life is like and is not at all put off, but, being Hughie, he soon pushes his luck too far.  Meanwhile, Butcher finds a supe eager to please for once but when all hell breaks loose at Yankee Stadium, he starts to smell a big fat rat…

This issue opens in the home of Wee Hughie and Annie, with Hughie’s friend Bobbi visiting, during which Bobbi explains her personal Brexit dilemma.  With the possibility of interruptions of importation, the estrogen and spiranolactone are expected to become incredibly expensive, if they’re available at all.  Hughie and Annie worry about what she’ll do as we cut to the past, with Butcher and Vikor (the super that he is blackmailing) discussing the plans for new team, The Skorchers.  Thanks to Vikor’s information, Butcher and The Boys arrive at Yankee Stadium, murder a woman, and send a group of actors out to be slaughtered by supes, ending with Butcher realizing that he needs to “get rid of” his wife Becky in order to follow through with his plan to kill all the superhumans,

Oh, and Annie may have figured out what Hughie is up to.

I’m still unhappy with the character of Bobbi, one of the more offensive portrayals in comics, but the bigger issue with this comic comes in the transitions between time frames.  Butcher’s flashbacks take place in (at least) two different time frames, with Hughie’s story sort of meandering around and in-between, and the story seems to make no effort to clarify those transition points.  It would be easy to read this issue without realizing that it even takes place in more than one era, and that’s a huge failing for me.  it’s also a really mean-spirited book, even in contrast to the original Boys series, which routinely featured drugs, murder and humilation for the characters.  Russ Braun’s art once again feels like it’s trying too hard to look like a Boys comic, delivering a parody of Darick Robertson’s style that feels insincere and immature at once, with distasteful elements on nearly every page.

BOTTOM LINE: ALL OVER THE PLACE

In short, The Boys: Dear Becky #5 is a bit of a slog, with unclear plotting, problematic art and a really offensive character front and center, making for a read that’s somehow both uncomfortable and interminable, earning a disappointed 2 out of 5 stars overall.  This will likely be my last issue of this book, as I initially wasn’t sure I was going to make it past three issue, but gave it another chance under the impression that it was a five-issue limited series.  There just doesn’t seem to be a point to either era of the story, making this continuation feel like the creators just want to provide new content to go along with the TV series, and honestly, that show is a better experience for me as a consumer.

I think I'm done with this series.