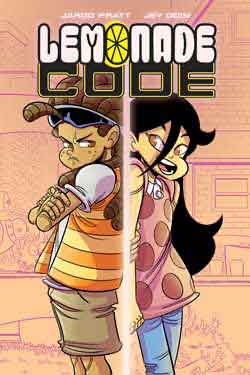 Here is the information from the press release: In January, Lemonade Code, an own voices middle grade graphic novel from the creative team of writer Jarod Pratt and artist Jey Odin, follows a young genius desperate for cash to fund his top-secret science projects. But after starting a lemonade stand, he discovers his brand-new next door neighbor doing the same thing! Soon, an all-out war begins as both kids go head-to-head in a lemonade war, but this time the fate of the world could be at stake.

Taking place in a recognizable world to today’s young readers was important to the creators: “Lemonade Code was born from a desire for my kids to not just be able to see a future with people who look like them in it, but to also see themselves in a future that wasn’t necessarily dystopic by nature,” said Jarod Pratt. “By taking a familiar children’s story conceit—two kids with dueling lemonade stands—and setting it in a time just around the corner, it is my hope that any kid who reads it and sees themselves in the characters will also have their eyes opened to the possibilities of tomorrow and their place in it.” The fan-favorite Catalyst Prime title, Quincredible: Quest to be the Best, returns in February 2021 from creative team Rodney Barnes, Selina Espiritu, Kelly Fitzpatrick, and Tom Napolitano, and follows Quinton West after a meteor show dubbed “The Event” left him with the power of invulnerability—but no other gifts. Not the most glamorous or flashy of superpowers. But there’s more to Quin than meets the eye, and he’s willing to show the world just that. Quincredible: Quest to be the Best will be reformatted in a new trim size and featuring an updated logo and design as the series moves from single issues to graphic novels. Secrets of Camp Whatever Volume 1, the latest graphic novel from the Eisner Award-nominated creator Chris Grine (Chickenhare, Time Shifters, Animorphs: The Graphic Novel); Martian Ghost Centaur by Unplugged and Unpopular creator Mat Heagerty with illustrations by Steph Mided; and The Hazards of Love: Bright World, a queer Latinx webcomic-turned-graphic-novel by Stan Stanley, will be available in March 2021.

In Grine’s Secrets of Camp Whatever, there’s more than mosquitoes at this creepy summer camp, as hard-of-hearing teen Willow and friends go head-to-head with supernatural scares, and a mystery involving her family’s past at the camp begins to unfold. For creator Chris Grine, inspiration was one part summer camp, one part supernatural, and everything else his children. “My preteen daughter and her ever-changing preteen attitude became the main inspiration for several of the main characters personalities, which made it so much more personal and enjoyable to write, especially when I would think about how she might handle this place and what choices she might make when things go sideways.” Martian Ghost Centaur, from Heagerty and Mided, explores coming of age for a young adult torn between leaving for college or staying in a beloved hometown that is on the brink of financial ruin—and the lengths one can go to save something they love. For Mat Heagerty, this came from taking a deep look at his own experiences. “Up until the pandemic, I’d worked for a decade in a really unique bar in San Francisco. I watched the city’s second tech boom push out so much of what made San Francisco feel like home to me. Watching the tech takeover, specifically of the Mission District, was where the story started for me.”

But for illustrator Steph Mided, it was a means of revisiting that high school transition. “[Martian Ghost Centaur] instantly took me back to my senior year of high school, where I was ready to take on the entire world, yet at the same time deeply scared about anything in my life changing.” In Stanley’s The Hazards of Love: Bright World, Amparo, a Latinx nonbinary teen, makes a deal with a talking cat to become a better person—in part to stop their mom and abuela from worrying about them, but mostly to be worthy of dating straight-A student Iolanthe. But in a twist of fate, the cat steals their body, imprisoning Amparo in a land of terrifying flesh-hungry creatures known as Bright World.

For Stan, this was a way to bring a deeply personal project to a larger audience. “It was important for me as a queer Mexican living in NYC that this project feature a diverse Latinx and LGBTQ cast and present urban fantasy through a non-European lens. Hazards reinterprets the ‘Down the Rabbithole’ trope to reflect a queer Latinx voice, and pays homage to Mexican gothic horror films, to telenovela tropes, and to Latin-American surrealism.” Offering lush full-color illustrations, Stanley hopes The Hazards of Love: Bright World will bring the horrors of the fantasy world and the more relatable horrors of our mundane world to readers in a whole new light. In Delicates, the sequel to Brenna Thummler’s best-selling graphic novel Sheets, summer’s ended and Marjorie Glatt is heading back to school, this time as part of the eighth grade in-crowd. But as she struggles to fit in with her new friends, she spends less and less time with Wendell and finds herself acting in ways that seem unlike her. Marjorie must soon come to terms with the price she pays to be accepted by the popular kids, but it might just cost her her friendship with Wendell and so much more. “Waiting for sequels is like waiting to reunite with old friends—you’re eager for that familiar comfort, yet anxious to hear of new adventures. Delicates is full of the fun, challenges, and bittersweet moments that make for the strongest of friendships, and I can’t wait for readers to return to this ghostly world!” said Brenna. Delicates will be available March 2021.