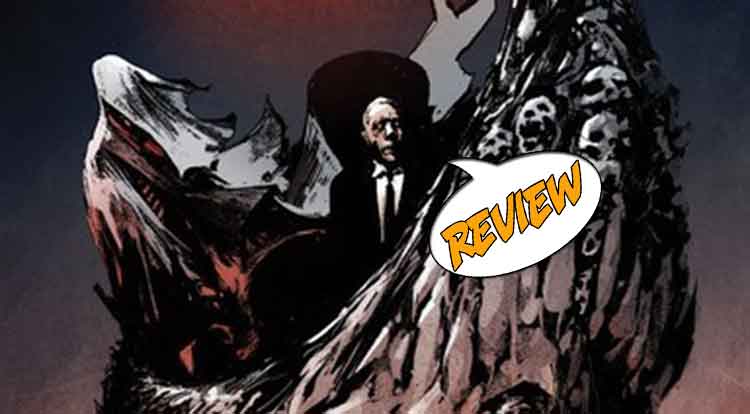 It’s a cat and mouse game as Abigail Adams makes her move. The Mayor is dead – and who is next? Find out in Killadelphia #8 from Image Comics!

Previously in Killadelphia: The city settled down into a new normal after the death of John Adams, a new normal with a special ops team in the city, including Jimmy Sangster and Jose. The former president may be dead – but his wife Abigail still lives and has taken command of the vampires. She has her own plans for the city involving the vampire (and former slave of Thomas Jefferson) Jupiter, who uses the pent-up rage he has harbored for lifetimes to kill with brutality. And when the major of the city is murdered, Jimmy and Jose realize that their vampire problems are far from over.

THE INTERSECTION OF LIFE AND DEATH

Interestingly, Killadelphia #8 opens with James Sangster, Sr. in his coffin contemplating death in general and remembering his own. As a vampire, he fought to resist John Adams, and now he fights undeath in the desire to see his wife again in the afterlife.

At the crime scene, Jimmy tells his Lieutenant that the vampires are back. The Lieutenant protests that Adams is dead, but before he can process this further, the FBI arrives. These agents are from a special division, and they offer to help. Jimmy turns them down, but they keep their offer open. Later, Jose examines the body. While she finds traces of vampire saliva around the Mayor’s wounds, there is none in his blood. He was not killed to be turned; he was killed simply to terrorize.

In this book, is death what we understand as death, or is it a metaphor? James finds himself on the shore of an eerie lake, with a boat and a ferryman waiting for him – a ferryman who knows him by name. It is Charon, and the two of them have an interesting discussion – James is not alive, nor is he truly dead. He doesn’t fit into the rules. Charon also knows that he is here to find his wife – how truly legendary. This intrigues the ferryman, and he waives his fee.

Meanwhile, Abigail Adams follows the news. Her followers don’t think that one corpse, no matter how important, will make any lasting impression. But she is a planner – that was only her first step. A world-famous entertainer, Blake Scott, has a performance that night, and she plans to set Jupiter loose on him in the middle of the show. That will make an impression.

James Sangster’s journey through the underworld is hauntingly classic. The waters are still, but they wind through the mental agonies of the inhabitants. They pass a city of fire, and the burning body of Mayor Gaskins, who recognizes Sangster and begs for help. Charon says there is no help he can give. James reaches a small island where his wife Gloria resides, a small island covered in huge fields of tulips. The two of them talk, and James (who understands life, death, and loss better now) apologizes. Finally, it seems, he can be at peace – until something wrenches him away!

THE AFTERLIFE DEPENDS ON WHOSE IT IS

The artwork in Killadelphia #8 is brilliant. It has a gritty edge and stark shadows that make it so stylized, but it still has the feel of something intimate and real, like someone in the room took candid photographs of the crime scene or other events. Perhaps this is because real-life has a flat, institutional color palette, but it is spattered throughout with the dark scarlet of blood. And it fascinates me that blood is treated so matter-of-factly, both by the police and of course by the vampires.

The scenes in the afterlife with Charon are jaw-droppingly imaginative. Charon’s robes drift around him like ribbons, but more angular than fluid. They look almost organic, imitating the curve of ribs, as though they are the bones of the robe. His boat is an exaggerated canoe-like shape, and when you see it up close, it is made of bones and skulls, like frozen souls stranded in despair. It is horrifying, but in a more quiet and peaceful way than the city itself. This is a truly stunning book.

The vampires are ruthless and highly intelligent. Their only foes are human, weak and desperate, but tenacious. The battle for the city – and perhaps even the country – has deep roots at its very heart. This is truly top-notch horror!

James Sangster moves on to the afterlife while Jimmy faces vampire-led terror attacks.