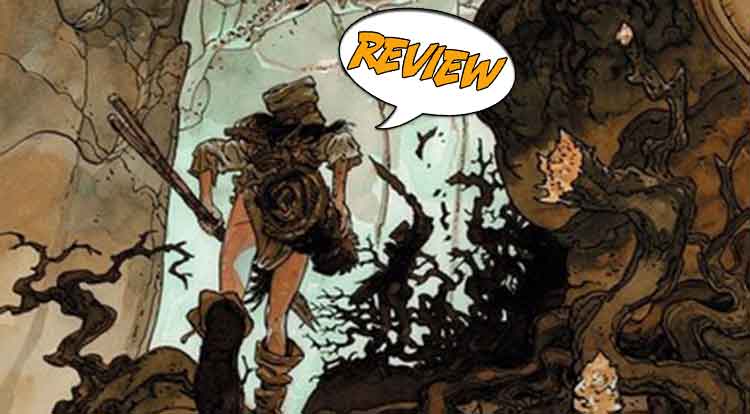 In THE GODDAMNED: THE VIRGIN BRIDES #3, Sharri and Jael have had enough of the cruel rule of the Nuns, and make a break for it, escaping the Mountain.  But they encounter a Serpent, who has an offer that is far too tempting.  Will they accept it?  Find out in your next mighty Major Spoilers review!

THE GODDAMNED: THE VIRGIN BRIDES #3

Previously in THE GODDAMNED: THE VIRGIN BRIDES: In the time before the Flood, an order of Nuns hide themselves atop a mountain, away from the wanton depravity of men.  There, they guard many orphaned girls, but the Nun’s plan for the girls is not one of peace and charity, but to become the Brides of the Sons of God.  And when Jael and Sharri discover the harrowing nature of those plans, they make plans of their own…escape!

Don’t be reading THE GODDAMNED #3 if you like to hold fast to your religion, because this is a tough read.  This isn’t a take you’re going to enjoy, especially if you adhere to the New Testament.  Jason Aaron and RM Guera take a decidedly Old Testament interpretation of the world in this series, set before God unleashes the Flood and drowns almost all of His creation.  It is a time of terrible cruelty, of sin and blood and violence, where even the innocent are capable of the most terrible of crimes.

In short, I loved it.

There’s a brutality and tenderness vying for the upper hand in THE GODDAMNED: THE VIRGIN BRIDES #3.  The Old Mothers, in tending to the young girls, express themselves in punitive terms, demanding utter adherence to their rule and harsh dictates.  Within that cage, Jael and Sharri seek to understand what the Old Mothers have in store for them, and when they find out, pledge to escape together.  Jael is the pragmatist of the two, someone who will haggle with the Serpent one moment, then plunge a sword into its head the next, ignoring its claims that she is still pledged to it.  Sharri is the more innocent of the two, though there is a tough streak in her as well.  Jael’s love for Sharri is clear, and in a revealing moment, she reveals that she hopes one day that that love will be seen by Sharri.

The world before the Fall is beautifully rendered by Guera.  The Mountain, where the Old Mothers hold the girls, is a type of Eden, a paradise away from the wickedness of men, a sort of gilded cage.  Nature abounds, as we see in the lush opening pages as the girls work the fields.  But this Eden has a serpent at its heart, as the true fate of the girls, and their punishment if they seek to escape it, is slowly unveiled.  God’s punishment is on its way, but the way the Old Mothers treat the children is in the here and now, and it is ghastly.

As I said before, this is a tough read, full of violence toward children, of a malice that has been brewing since Adam and Eve were cast out of Eden.  I particularly enjoyed the depiction of two strong female leads, looking out for one another, and willing to sacrifice almost anything to save and protect each other.  The world itself is grittily realized.  There is no Eden, not like the Bible described.  Instead, there is an unrelenting wilderness, full of vicious animal life and poisonous vegetation.  God get’s short shrift, in a world where children are tormented and abused, and promised a path to freedom that is anything but.  It feels like a world deserving to Fall yet again, but in the love between Jael and Sharri, we see the seeds of redemption, if not for man, then at least for women.

THE GODDAMNED: THE VIRGIN BRIDES #3 is an unflinching look at a cruel world run by monsters who treat children as so much garbage for their own twisted beliefs.  There is little on offer here that can redeem such creatures, so it is cathartic to see the punished mete out their own punishments to their oppressors.  Jael and Sharri are innocents in a fallen world, and are swiftly learning that the only way to survive is to take the oldest, cruelest rule from the Bible and live it – an eye for an eye, a tooth for a tooth.

The Bible has been a fertile source for fiction over the years, so it is no surprise elements of it translate so nicely to the comic book form. But THE GODDAMNED: THE VIRGIN BRIDES #3 isn’t for your reading at your Sunday school, but is instead a no holds barred condemnation and damnation of those who use its teachings to dominate and oppress the weak.