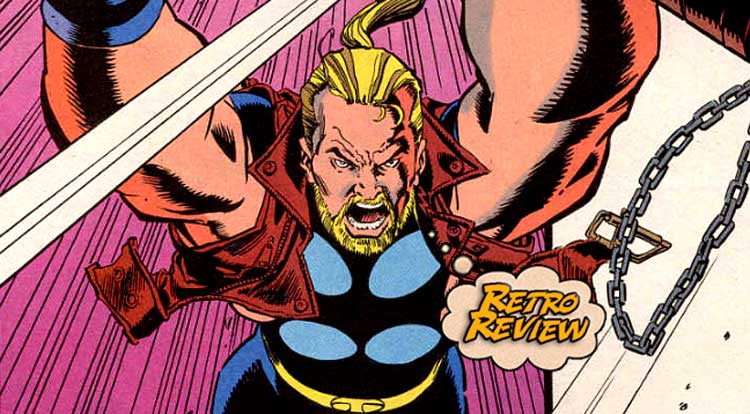 You like the grimdark 1990s?  You’ve just been…  THUNDERSTRUCK!  *guitar solo*  Your Major Spoilers (Retro) Review of Thunderstrike #1 awaits!

Previously in Thunderstrike: After being badly injured by a battle between Thor and a villain, Eric Masterson nearly died.  It was only the intervention of Odin, who merged his mortal form with that of Thor, that saved his life, allowing Eric to swerve as a sort of alter-ego for the Thunder God, much as the Donald Blake identity used to.  Later, a chance encounter with Mephisto left Eric as the mind in control of Thor’s powers for a bit, until Odin once again separated them, creating an enchanted mace called Thunderstrike as a consolation prize for Eric, returning Mjolnir to Thor and allowing him to return to his own life.  It is here where we pick up with Eric Masterson, wondering what to do with his dual life. This comic seems like it’s all about the 90s, with the foil cover and the focus on spectacle, but in a lot of ways it’s a very 80s proposition, right down to the joke in panel three about “comic books” and how Thunderstrike’s life totally isn’t one.  The return of Thor has thrown his life into all sorts of chaos, forcing him to find a new place to live, and a new job (both taken care of in one dinner with his friend Samantha) and a new identity, which will have to wait, as an old threat rears its head. I remember when Ron Frenz was drawing Thor circa 1988, and being annoyed at how blatant a Kirby clone he was, but this issue shows a different side of his art, and the design work on Bloodaxe (a villain carrying the mystical chopper of the late Skurge of Asgard) here is pretty stellar.  The identity of this villain is still a secret as of this issue, allowing us to wonder if he’s actually Eric’s ex-wife’s new boyfriend, whose car is stolen this issue by a minor villain called Carjack.  Bloodaxe arrives with decapitation on his mind, but Eric-as-Thor-with-a-mace takes him down.

Well, TRIES to take him down, anyway. Eric is still getting used to his new weapon, getting thoroughly trounced by Bloodaxe, only surviving due to a last-second save by the NYPD’s superhuman division, Code Blue.  A chagrined Eric realizes that it’s time to come to terms with who he is and what he can actually do with his new smashy-stick, leading to a visit to a local costume shop to freshen his look. Eric gets not only a earring, but a manly ponytail, heavy leather boots, a sleeveless vest, fingerless gloves and a preponderance of leather, which apparently gives him the wherewithal to confront Bloodaxe again, but when the villain nearly kills Carjack and his minions, Eric flies into a rage.  Giving in to the urge to just plain smash, he uses his mace “like an enchanted Louisville Slugger”, which is… an image, I’ll give ya that.  He manages to disarm the villain, and discovers another new power of his mace in so doing. The massive property damage allows Bloodaxe to escape, and when Kevin finally digs his way out of the rubble, he is pressed on his name by the NYPD, dubbing himself Thunderstrike on the spur of the moment.  Thunderstrike #1 is one of those comics that is actually better than I remember it, with a lot of fun action sequences, some by-the-numbers worldbuilding for Eric and the traditional “named by a miscommuniction” trope from the Silver Age wrapping into a book that earns 3.5 out of 5 stars overall.  The fact that he ends the issue hearing strange whispers from the axe that would eventually lead to his death is unnerving, but it’s not a bad comic book overall.

The 1980s are all over this comic, and not always in a bad way, meaning that it's exciting in it's high-speed establishment of the new normal and has a lot of action. It's not bad at all.