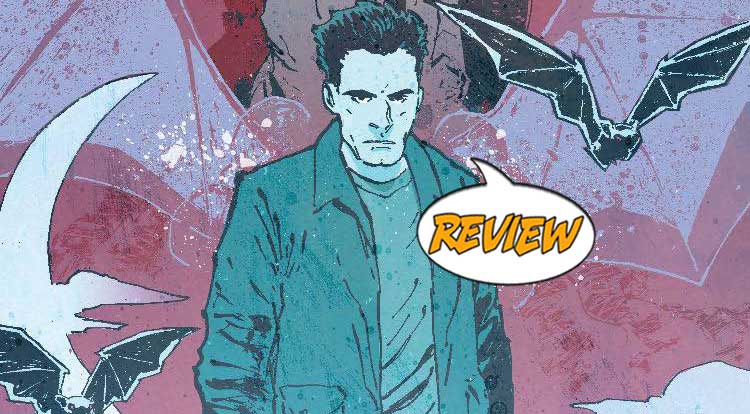 Previously in Angel & Spike:  Detective Kate Lockley is getting pulled further into Angel’s supernatural world, but may have a connection to his violent past that neither of ever expected!  Meanwhile, Fred taps into a dangerous new magic… and that may just be part of Wolfram & Hart’s master plan.

“KNEW IT WAS A WEREWOLF…”

This issue begins with a murder, as a man in an alleyway is torn to shreds by… something horrific.  Angel, Spike and Gunn are called in by Detective Lockley, whose visions of a past life with Angel/Angelus once again pop up to distract her. Gunn is sure that he’s finally found the vampire that he’s been hunting, but Angel discovered shredded clothing that leans towards a different conclusion…  moments before Spike is thrown through a wall by a werewolf.  While the trio battles the hairy interloped, Fred (possessed by Lord Baphomet) is at Wolfram & Hart, finally using her powers for their evil bidding and murdering someone in the process.  Our vampire trio brings down the werewolf, moments before Gunn and Angel have a heart-to-heart/screaming match that ends with Gunn stalking off.  As the issue ends, Angel and Spike check on their attacker, only to find him returned to human form, greeting them all with a friendly “Hey guys.  What’s up?  I’m Oz.”

I’m kind of obsessing with Hayden Sherman’s art in this issue, all thick lines and angles and deep patches of shadow which, combined with Titov’s hyper-coloring, make it all feel like a strange Italian film from the 50s.  The portrayal of Oz’s wolf form looks a bit like Mike Mignola, with wild angles and intense choreography.  The various perspectives used make even the quiet conversational moments interesting to look at, but the story is…  somewhat hard to grasp?  I’m still not sure what’s up with Gunn (and I did read the previous issue to make sure I wasn’t missing something obvious) while the interactions of Fred and Baphomet feel awkward throughout.  That said, I enjoyed this issue for the little touches, like Spike trying to convince Gunn and Angel that they’re on the wrong path and Angel’s inner monologue, which borders on but never quite falls into full-on pathos.

Even though the last page moment was telegraphed by the solicit, Angel & Spike #14 makes for a good read, with some action, some rumination and a little bit of crazy magic combining with truly unexpected art to make for an impressive overall package that earns 4 out of 5 stars overall.  I keep finding myself flipping back to look at individual moments and just staring at how cool the art is, and I’ll be back next issue just to see if it looks as dynamic and unusual as this one.

Great art plus a slightly puzzing story make for an interesting read overall.