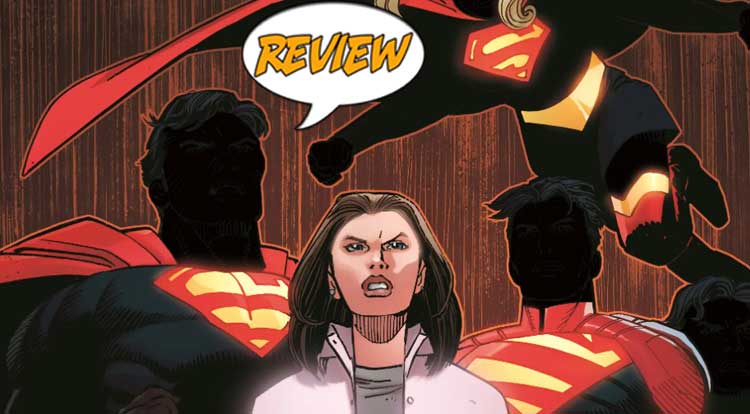 Thie Invisible Mafia stands revealed.  But is even the entire Superman Family up to the task of bringing them down?  Your Major Spoilers review of Action Comics #1025 from DC Comics awaits! Previously in Action Comics:  Superman’s truth is out there—and now it’s time to rewrite the rules!  The invisible mafia has taken advantage of the chaos that’s descended on Metropolis, so the House of Kent is going to talk to them in a language they’ll understand.

TRACKING DOWN THE INVISIBLE

Our story begins on another world, as Marisol Leone, the head of the Invisible Mafia, meets Dr. Glory of STAR Labs for the first time, in the hopes of getting away from the horror that is the Crime Syndicate of America.  (It used to be Earth-3, I’m not sure if that designation still holds.)  In the present, Superman, Supergirl and both Superboys, Conner and Jon Kent, are scanning the city, trying to find the Red Cloud after she murdered a mayoral candidate.  Superman broadcasts the story to Lois for publication, but things at the Daily Planet are a little bit dicey, as they’re being raided by the FBI.  As for Dr. Glory, she has pulled up an alternate version of The Parasite who is actually good at what he does, sending the incredibly powerful creature up against the Superman Family.  As the issue ends, a Superboy has fallen, and Marisol Leone has arrived at the Daily Planet with a bombshell: Lois Lane isn’t actually from this Earth!

That last bit isn’t so surprising to readers, but what did surprise me is that fact that I haven’t read this book in at least seven issues, but we’re still dealing with the same story beats that were set up all the way back in issue #1000.  That level of decompression isn’t necessarily a bad thing, but even with the story feeling like we’ve been here forever, I had somet trouble following this issue.  The opening sequence doesn’t clearly identify Glory and Leone, and since it’s set in the past, a lot of the visual cues that would tell us who is who are missing.  The appearance of the sorta/kinda Parasite is puzzling as well, since they make a point of saying that he’s NOT a Parasite, even though he clearly is a version thereof.  As for Romita & Janson’s art, it’s really angular and a little bit impressionistic, but I enjoy it, especially the appearance of the Legion’s Brainiac 5, who guest-stars.  The battle sequences are fun, and the sight of Connor Kent crashing to Earth is very disturbing, making me worry about his welfare even though I suspect they won’t kill him so quickly after returning him to continuity.

In the final analysis, Action Comics #1025 successfully gives equal weight to journalism and high-altitude heroism, but it still feels like both sides of the equation are slighted somewhat, and a confusing final page adds to my comprehension difficulties, earning 3.5 out of 5 stars overall.  The art makes for a lively story, but it the amount of decompression makes it feel like there isn’t enough story for a whole issue.

This issue successfully focuses on the drama at the Daily Planet and the peril of the Parasite, but both threads feel a little underfocused. The art is nice, though.