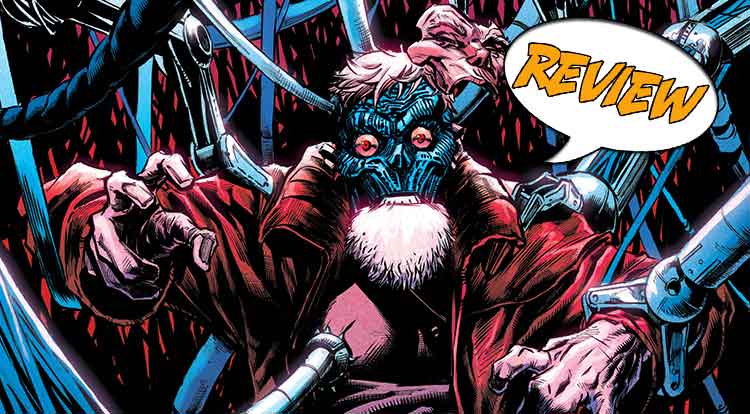 The next stage on their trip around The Spiral has been reached, but the group is still no closer to understanding what has happened to The United States of America.  Your Major Spoilers review of Undiscovered Country #8 from Image Comics, awaits! Undiscovered Country #8 begins with the group in shock as they stand face to face with a very alive Sam Elgin, who they watched die just moments before.  They attempt to press him for answers but before they can get them they’re attacked by a security system belonging to their next destination.  Sam leads them to Unity, a technological marvel that was once the Pacific Northwest, except now everything is bleached white and part of a massive biomechanical cloud network. After a flashback to before The Sealing, the group is introduced to the leader of Unity, who presents something special for two of the members of the group.

“Over All This Cryptic Bull-“

One of the things I was concerned with when it came to this series was how much was it going to rely on cryptic storytelling and vagueness.  Now while I don’t things have hit a breaking point yet in those terms, it’s getting close.  What’s frustrating about it is that the characters themselves are acknowledging this as if that somehow alleviates the frustration caused from not knowing what’s going on or lacking things needed to work out some sort of theory ourselves. Now, half of the enjoyment of this series has come from how they manage to take certain aspects of Americana and warp them into unsettling and literal.  In those regards this issue is still great.  Things like name dropping people from American Folklore, or the sinister usage of a classic Woody Guthrie song, are the kinds of things that make this issue, and series, enjoyable.  Its ability to support the weight of the enjoyment burden is starting to wane though, and it’s starting to show its cracks in this issue.

Nice To See a New Setting

After spending so many issues in a desert. It’s a nice change of pace to see a new setting.  This is also one of the few times we’ve seen a recognizable landmark with the Space Needle, which helps establish an actual location.  The only disappointing thing is that this new location is rather bland.  But, I’m willing to concede that that is probably by design considering the personality of Unity we’ve seen so far.

Bottom Line: Still No Answers, but At Least there’s Some Changes

The pacing of Undiscovered Country has been a bit slow with the last couple of issues, so it’s nice to see some things start to get shaken up.  It just would’ve been nice to get a little more clarity with what is actually going on with the bigger picture.  3.5 Out of 5

Undiscovered Country #8 pushes the plot forward in an interesting direction and freshens up the series as a whole. Unfortunately there’s also a lot of vagueness and cryptic storytelling that’s becoming frustrating to read.