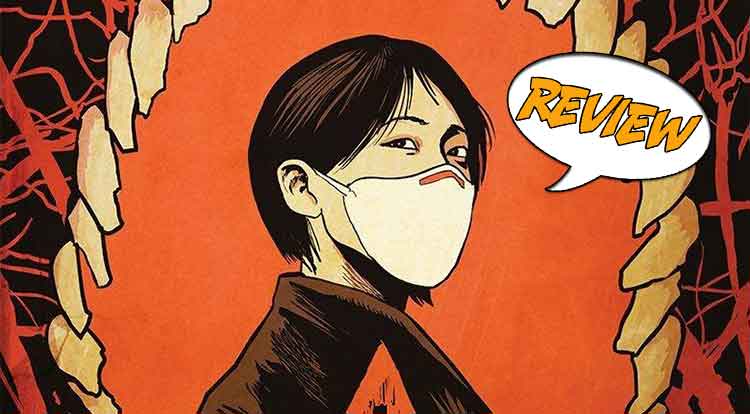 In GIDEON FALLS #25, Angela discovers the consequences of destroying the Black Barn promises the end of existence.  As the multiverse collapses, she must begin a journey to find those who will prevent the end of everything.  Can she?   Find out in your next mighty Major Spoilers review! Previously in GIDEON FALLS: Gideon Falls is the centre of the multiverse, the focal point of all that has been, and all that will be.  It is also the only thing keeping the Dark from rampaging across existence, and now that it has been destroyed, the multiverse is beginning to collapse, threatening existence itself…

TIME IS NOT ON THEIR SIDE

The Black Barn has been the focal point of Gideon Falls.  Its appearance presages disaster.  Whole words, it seems, revolve around it, are accessible through it, whose existence depends upon it.  And now it is gone.  And the next phase of the series has begun.

Writer Jeff Lemire and artist Andrea Sorrentino have crafted another fantastic issue in this intriguing, puzzling, demanding series.  Opening with a creation myth, GIDEON FALLS #25 swiftly moves on to depicting the effects of the destruction of the Black Barn has had, before ending with a promise of more things to come.

The beauty of this issue is that it starts at the macro level – the Bishop explaining to Angela the creation of the multiverse, before narrowing in on the micro – how destroying the Black Barn has knocked out the underpinnings of creation.  Lemire’s stark writing, the clarity of his prose and dialog, shines through in this issue.  Creation myths are a dime a dozen in genre fiction – just about everyone of any note has had a go at explaining how their version of reality came to be.  Very few, however, have carried such menace in their words and imagery, as the opening pages of GIDEON FALLS #25.

This is very much the Bishop’s story in this issue, with Angela being a reactive figure throughout, a commentator on events as the spiral out of control around her.  While much of the focus of the earlier issues was around what was the Black Barn, and was Norton crazy or (surprise!) right after all, the shift in story now is less about resolving the mysteries (though there are still some that need explaining) and more to dealing with the consequences of Angela’s actions.

Andrea Sorrentino is the real hero of this issue.  His artwork is heavy on the symbolism throughout, as well as providing a series of striking, horrifying images.  His realization of the creation myth of the Gideon Falls universe is deceptively layered.  It gives heft to Lemire’s writing, bringing visual appeal to what might have been a dry recitation of words.  To be honest, some of it is awe inspiring, in the sense that it brings a sense of overwhelming dread and perception blasting reality to the sheer enormity of creation.

Elsewhere in the issue, Sorrentino appears to be having a really good time realising the horror inherent in the series.  As the infection spreads, jaws unhinge, eyes turn blood red and the sky boils with destruction.  Clever use of panels add momentum where required.  There’s also a gritty feel to the pages, as the urban decay around Angela and the Bishop seethes with menace.  His realization of the Bishop succumbing to the infection is startling and terrifying all in one go.

GIDEON FALLS took the haunted house trope and turned it inside, presenting mysteries as layers of an onion, revealing more confusion and terror as each layer is peeled away.  Now, GIDEON FALLS #25 presents us with a waypoint in the series, a chance to gather our breath as some explanations are provided, before the characters, and the readers, are plunged into new terrors.

Heavy on symbolism, filled with stunning imagery, GIDEON FALLS #25 is a waypoint to the next stage of this remarkable series. With the multiverse collapsing arounds its ears, only a brave few can save existence.