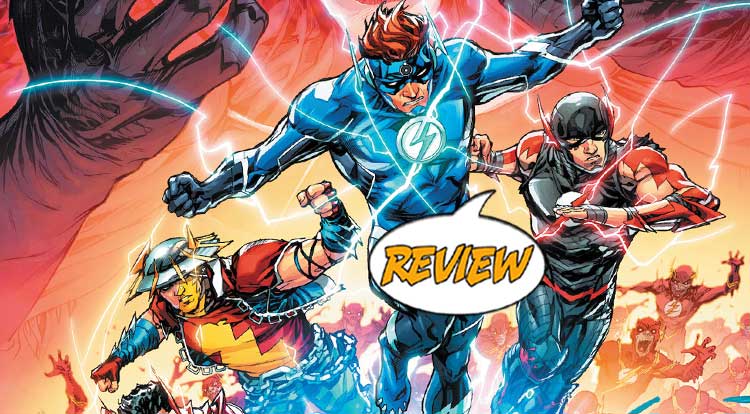 It’s a race for the lives of every soul in the multiverse… and the Flashes are losing. Your Major Spoilers review of Dark Nights: Death Metal – Speed Metal #1 from DC Comics awaits!

Previously in Dark Nights: Death Metal – Speed Metal: The Darkest Knight is after Wally West and his Dr. Manhattan powers. Thankfully, Wally has backup in the form of Barry Allen, Jay Garrick, and Wallace West! It’s a knockdown, drag-out race through the Wastelands as the Flash Family tries to stay steps ahead of the Darkest Knight and his Lightning Knights!

We open with Wally West, the lost Flash, explaining against his return from the Speed Force into the new DCU several years ago. We get a quick recap of Wally events, including a brief appearance of Doctor Manhattan as puppet-master, summarizing and streamlining the back-and-forth of Wally’s last few years, explaining that all his actions were driven by an obsession with fixing the timeline. There’s some recapping of the events of ‘Dark Nights’, which explains why he’s no longer in the Mobius Chair (it’s in the possession of The Batman Who Laughs), cutting straight to Wally, Jay Garrick and Barry Allen running full-tilt through the Speed Force. They are quickly joined by Kid Flash Wallace West, and we find that TBWL has sent a horde of multiversal Dark Flashes after them! In a last-ditch effort to give them time to plan, Wally calls upon Johnny Quick’s speed formula, the Speed Force is corrupted (giving them new Heavy Metal costumes) and Wally is pushed to the brink of disaster…

…only to get a pleasant surprise.

CAN’T TELL YOUR PLAYERS WITHOUT A SCORECARD

As someone who hasn’t been following the ‘Dark Nights: Death Metal’ event, this issue is a mixed blessing. It doesn’t expect me to have read the main title, and gives a general recap of what you need to know, then sets us off on the journey to the center of The Flash. Sadly, though, the lack of context also makes this story feel like it’s hanging in space. Over the course of the issue, Wally and Barry come to terms with their relationship, Wally sees his lost family again, and even Max Mercury makes an appearance, but as it ends, the three speedsters who started the issue run off together, making it seem like nothing in this issue really matters to the larger storyline. That’s a shame, as the art is quite strong in these pages, especially when Wally gets his old red-and-gold costume back briefly, and all the running about looks really great. The story even tries to deal with all of the wild vacillations of Wally West since his resurrection, making sense of ‘Doomsday Clock’, ‘Heroes In Crisis’ and ‘Flash War’ versions of the character that all feel like different people. It’s just a shame that the structure of the crossover and this one-shot make it feel like it won’t matter.

All in all, though, Dark Nights: Death Metal – Speed Metal #1 is an issue for the Wally West fans, and it’s damage control does make me happy, especially the appearance of Linda and the kids, but the frenetic pacing is an obstacle to my enjoyment, earning a better-than-average 3 out of 5 stars overall.  While it’s good to see many of these characters back and Wally pulling himself together, the nagging feeling that it just won’t matter in the long run is still there.  I like what this issue wants to say, I just wish there weren’t so much heavy lifting to be done in the hopes of restoring a Wally West Flash character that we all recognize and want to root for.

This issue works on an emotional level, and I’m happy to see them trying to return Wally West’s Flash to a place of prominence, but it’s one long high-speed chase without a lot of context. It’s good to see characters like Jay and Max again, but there’s not a lot of heft to the issue.