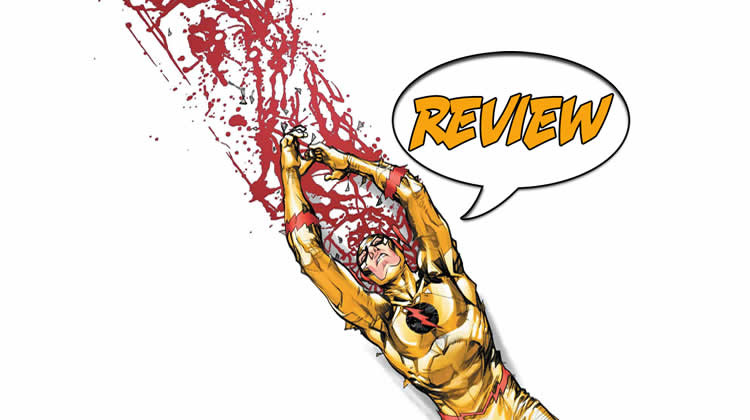 The end of an era has arrived! I’m going to miss Joshua Williamson writing the Fastest Man Alive, but he went out with a bang in The Flash #762 from DC Comics! SOLICITATION: “Finish Line” finale! Barry Allen and the Reverse-Flash race for the last time in this fast-paced conclusion. For years, Eobard Thawne has tormented Barry Allen, and now the Flash knows the Polly way to win is to make sure the Reverse-Flash never runs again! The story years in the making comes to a close as Joshua Williamson finishes his epic 101-issue run on The Flash!

Wherever the Flash has appeared, be it in comics or on the TV, he’s been plagued by the Reverse-Flash, an opposite number with a personal grudge against him. After decades of watching this play out, I was very curious to see how it would conclude. After all, at SOME point, this kind of “war” has to come to an end.

To Mr. Williamson’s credit, he did it in a surprising way, and yet a satisfying one as well.

I mean, this has been a personal struggle in the purest sense of the word. Barry’s mother was killed by Thawne, and he made sure Barry knew it! In this “Finish Line” story, Reverse-Flash has brought together Flash’s Rogues and other baddies in an attempt to overwhelm the guy who can usually outrun anything. On the other side, though, Barry’s closest allies have been helping him out, too.

The craziest part of this whole story was when Thawne used his vibrational powers to push Barry out of his own body, and thus he literally became the Flash himself, quite a weird way to fulfill Thawne’s deepest and darkest desires.

Appropriately enough, this issue focuses on a race between the two speedsters. In the process, Barry does something many of us might consider not quite super-heroic. Hey, don’t we all expect Barry to beat Thawne in a battle to the death, a fight to the finish? Well, Barry has a different solution in mind, one that I found touching, actually.

Williamson’s “run” on The Flash has been some of the best storytelling I’ve seen the Scarlet Speedster ever, and I’m sorry to see it end. But he did something that hasn’t happened in years—ending a rivalry! Hey, when has the “war” between Batman and the Joker ever ended? I mean, in the current DC continuity? Of course, future writers may undo this turn of events, but I hope not. There are other foes Barry can take on—we’ve likely seen the best writing the Reverse-Flash has ever received when you combine Geoff Johns and Joshua Williamson’s scripting. If I had the job of following these two powerhouses, I’d find another villain to write about.

I always talk about the facts that, at one point, DC killed Barry because he was considered just too powerful. Creators just couldn’t keep challenging someone that powerful! Well, if the last 101 issues are any indication, a great writer can overcome any obstacles a superhero provides, including being the Fastest Man Alive.

The cover to this issue was perfect, showing Barry dragging the bloody body of the Reverse-Flash along, complete with a trail of blood left behind it. THAT is what I expected would happen in this issue. Nice bit of legerdemain there!

Mr. Porter’s art has always been a favorite of mine, particularly when it comes to the Flash. Showing high speed while keeping it understandable is quite the challenge. This guy knows how to do it, and do it with style! The action sequences were strong, and his facial expressions were clearly understandable and appropriate! Well done!

After 101 issues that I’ve enjoyed tremendously, I have to admit that I’m a little nervous about what comes next for The Flash. If someone tries to reduce his powers or change who the guy is in the suit, well, I’ll REALLY be longing for this just-concluded “golden era” for the Scarlet Speedster. I’m sure Williamson and his team would be the first to say that there’s still a lot of storytelling life in the character, so I’m hoping that the new crew will go “where no Flash has gone before,” if I can be so bold.

Hey, maybe the next 101 issues will be even better! It could happen! At least, I’m planning to be around that long out of love for the character and his supporting cast, be they Rogues or family. We already know the Trickster is involved next issue, so I’m anxious to read that! I’ll hear Mark Hamill’s voice when I read the dialogue for sure!

Williamson’s “run” on The Flash has been some of the best storytelling I’ve seen the Scarlet Speedster ever, and I’m sorry to see it end.