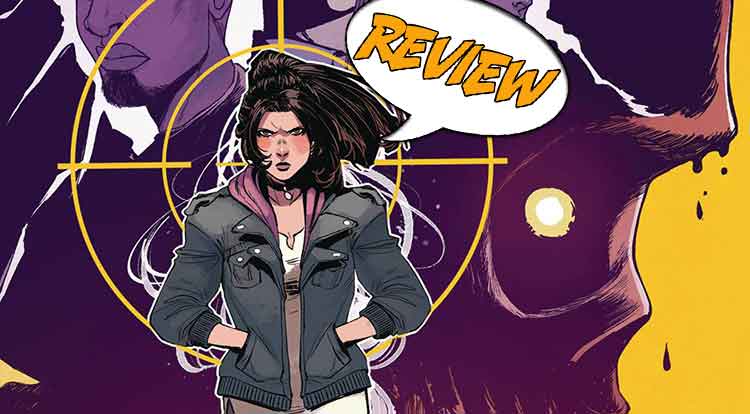 Gina Myers is captured by a government agency specializing in magic. Can they force her to help them with whatever they’re doing? Find out in Shadow Service #2 from Vault Comics! Previously in Shadow Service: Gina Myers is a witch and private investigator in London with a talent for finding people. Little does she know she’s about to become the hunted herself! She is working for Gideon Quill, who has hired her to find a guy by the name of Theo Grange. She locates him in a bar and immobilizes him, but before Quill picks him up, he changes form, which is odd. Working out in the gym later, she sees a guy who was at the same bar as Grange, but when she follows him, he vanishes, and only a Black man is there. She uses her skills to trace the first man by scent, finds his home, finds him dead, and finds the Black man again. Then a woman she also saw in the bar arrives and shoots her, surrounding her with mystical energy.

Shadow Service #2 open with Gina recalling more about the day she discovered she could use magic. After she used magic on her mother’s abusive boyfriend, her mother ran away in fear. The boyfriend, whom she had trapped in the wall, could still reach out and attack her. Instinctively, she used another magical phrase and found herself somewhere else entirely.

This leads to the present, where she is trapped somewhere. Desperately she uses the same magical phrase – and finds herself in a room with the woman from the bar holding a gun on her. She tries again to use her magic and fails – she is in a circle of horseshoes. The people who have captured her plainly know about magic, and in short order we meet them. Their leader is Hex, who looks like a boy dressed in a suit. The woman, and the Black man, whom he calls Wraith-One and Wraith-Two, are two of his agents, employees of Section 26, and organization that defends the U.K. against mystical enemies.

They want Gina for a couple reasons. First of all, she has been on the loose and they didn’t know about her until recently. Secondly, Quill is a fixer for the demonic families in London, and if they could turn him, it would be highly useful to them. And she could be their in with Quill. If she doesn’t cooperate, they can just put her back in the prison-bottle they captured her in before, so it looks like they have a compelling argument.

If there’s anything Gina knows, it is how to get away. She uses the spell-reflecting effects of the circle to propel herself through the skylight. She is away from everyone just long enough to use a translocation spell that fortunately puts here near her office. Edwin is there. As she packs to get out of town, she asks him if he’s ever heard of Section 26. He has – and he insists she give herself up NOW. She barely has time to get upset with him before the two agents show up. But Gina slips out the window and into obscurity.

She gets a call from a client who has a lead on a guy she hired Gina to find for her. It gets her out of London, at least. But asking questions leads to a couple locals trying to beat her up. And they’re interrupted – by the agents from Section 26.

Shadow Service #2 has art that is imaginative and horrifying. There are definitely some body horror moments that pop up. Whatever kind of magic Gina uses, it isn’t always pretty. And the magic that Section 26 uses against her isn’t either. There are moments when it physically distorts her. At other times, the circle simply counters her magic, but it does so roughly. It’s the classic scene of the investigator being beaten up by thugs, except that it’s all hands-off and ironically, the effect of her own efforts. I do like the unrelenting portrayal of Gina as someone who is on the run and determined to get away. Every moment she is pursued or captured, we feel that she is working out where her escape routes are.

I also like the scene where we briefly visit Gina’s office. It looks run down and lived in, with papers and work strewn about and dirty dishes on the desk. Her bed is unmade, her belongings meager. We believe that she can throw together a backpack and have enough stuff to get by on for a few days, and that she’s been on the run before. And she still has time to throw together a spell of spiders before she slips out. And then, when Wraith-One and -Two contact Hex, we see him apparently in a spell of his own, and this is truly impressive, both beautiful and creepy, and absolutely otherworldly.

Shadow Service #2 impresses. The first issue was all about the weird; this one is all about revealing the complicated existence of a magical world that is ruthless and dangerous. It’s gripping and intense and keeps you guessing.

It’s a cat and mouse game between Gina and Section 26, and she is determined not to be caught!