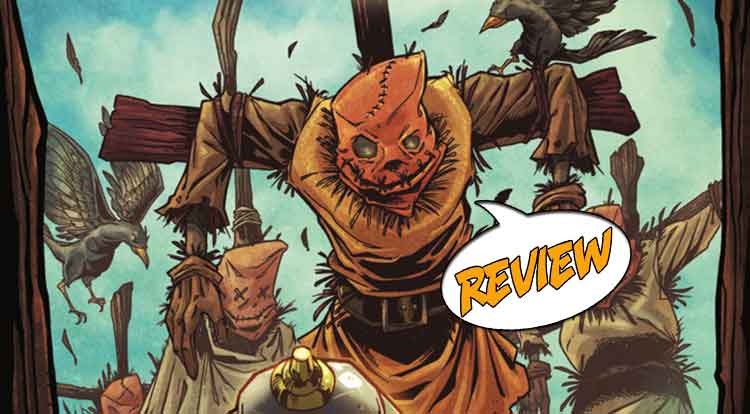 Canto goes to see Aulaura and finds her village ravaged. How long is the Shrouded Man’s reach? Find out in Canto II: The Hollow Men #2 from IDW Publishing! Previously in Canto II: The Hollow Men: Time has passed since Canto’s encounter with the Shrouded Man. His people fought for their freedom and Canto has led them to a new place to live. They built the city of New Arcana and they have befriended the Malorexes. Life is going well, until one of Canto’s friends, Veratta, suddenly collapses. Her heart just stopped. The Elder restarts it, but he tells Canto the truth. All their hearts are winding down and they have but a few months to live, except for Canto. He sets off on a new quest to find the source of this curse and finds he will not be traveling alone. His friends Falko, Rikta, and Veratta have decided to go with him.

NOTHING GOES QUITE AS EXPECTED

As Canto II: The Hollow Men #2 opens, the four friends and their Malorexes make their way through deep grasslands. Canto is looking for Aulaura, who helped him before and who knows something about magic. He is hoping she can help him track down the source of their curse. But when they enter the village, they find it empty and abandoned, or almost abandoned – there are several scarecrow-like figures in a cluster together.

Canto remembers a trader who once told them about a tradition of making straw men to celebrate a good crop. These do not look the same. They look sinister, almost as though they are waiting for something. And then a hoard of flying, bat-like creatures attacks. Veratta wants to run, but Canto holds his ground and uses his Malorex to launch him into the air. The battle progresses until the creatures band together and fly off with the Malorexes.

Suddenly several arrows strike, forcing the creatures to drop at least Canto’s Malorex. Aulaura is there, and she takes them to shelter. Canto tells her of his quest. She is not so optimistic. Before she met him, her village had been cut off from trade by the Shrouded Man. After she helped Canto reach the Emerald Tower, she returned to find the village prosperous again. Life went well…briefly. Famine returned; their trade routes were blocked; villagers turned against each other. At their most desperate, the Shrouded Man came and offered them respite – the respite of death.

The Furies arrive and Aulaura draws her sword to hold them off, urging Canto and his people to get to the river. There is a boat on shore, just big enough to hold them. They have had a narrow escape, but what lies ahead for them, down the river?

A PASTORAL BUT BROKEN WORLD

The art of Canto II: The Hollow Men #2 is full of drama and atmosphere. The scene when Canto discovers the Hollow Men is a double page spread. After several multi-panel pages, it feels like we wound through a village and reached an open central square. The Hollow Men are the size of people and look disturbingly crucified. The hoods that make their heads all have different expressions sewn into them. They are thoroughly creepy and full of forboding.

The action scenes are terrific. It does take a minute or two to get reacquainted with who is who. Canto and his friends look like small metal people and while they have their unique differences, it took some time for my eye to get used to them. But when it gets down to the fighting, the action soars off the page. It’s big, bold, and desperate.

I really like that Canto II: The Hollow Men #2 gives us a little more insight into the Shrouded Man. His reach is long and his oppression knows no bounds. This pushes the stakes of the story quite high which adds to the overall tension.

Canto goes to see an old friend for some help and finds himself face to face with enemies new and old.