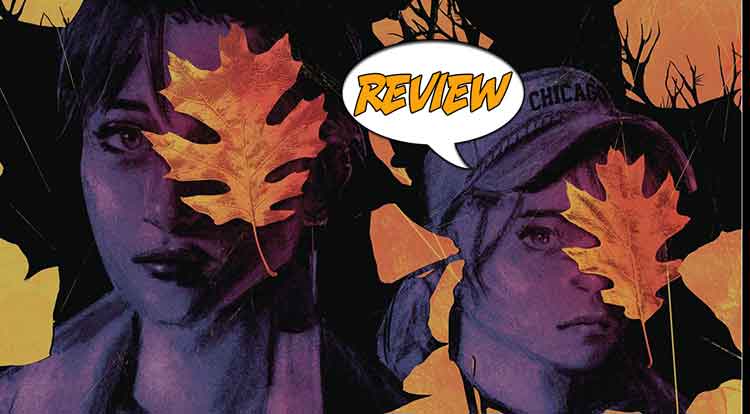 Kat’s life is in the dumps, but the death of her estranged and hated mother gives her and her daughter Sybil a chance for a new life. But why does this town feel so odd? Find out in The Autumnal #1 from Vault Comics! Previously in The Autumnal: Kat Somerville grew up estranged from her mother and has not had an easy life. She is raising her daughter, who has issues of her own, as best she can. One day, a phone call out of the blue changes everything, raising old ghosts in the process.

IS THIS FINALLY A CHANCE?

The Autumnal #1 opens with Kat Somerville walking into an elementary school, swearing to herself and talking about going out in style. She is headed for the principal’s office, where her daughter Sybil sits looking stubborn and recalcitrant. Her face is bruised; she is seven years old and is violent. She has intermittent explosive disorder. (A private joke between her and her mother is that she calls it “Mistress Explosion Destroyer,” which is both bittersweet and disturbing.) Sybil has beaten up another child, although she claims she was defending herself.

At the end of that scene, Kat removes her sunglasses and we see her black eye. Then we flash back to earlier that day when Kat is icing her eye and dealing with a hangover when she gets a phone call. In a few short panels, we learn that she is estranged from her mother, who has just died. She is adamant about not attending her funeral, but it sounds like she is inheriting her house. Her life has been full of hard times, bad jobs, lack of money, worthless men, and too much drinking at times. Is this a way out of this life for her and Sybil? And can she get some closure?

She and Sybil pack up their stuff and leave that very day, taking a bus from Chicago to the New England town of Comfort Notch (Home of America’s Prettiest Autumn). It’s full fall color time, a kind of color Sybil has never seen while for Kat, some of her memories start coming back. They meet a man from town and ask directions to the funeral home. He knew Trudy, Kat’s mother, and his reaction to her is odd and cautionary.

There is a fascinating interlude when Sybil sees a group of locak kids and wants to play with them, promising not to be a bully. They’re playing a circle game and singing. It’s like “Ring Around the Rosie,” in a way, but with their own lyrics. Kat remembers the song, and she remembers the images that go with it, drawn here in sidewalk chalk. The song hints of madness and murder in the oblique way of traditional old rhymes passed on by kids.

Kat musters her courage, and the two of them enter the funeral home. Trudy’s coffin is closed, even though Kat wanted it open to face her other one final time. There are no other mourners. There have been no other mourners – the only names in the guest book are Kat and Sybil. Kat cannot resist – she waits until the funeral director leaves for a moment and sends Sybil to look at something. And then she lifts the coffin lid.

THE TWO FACES OF AUTUMN

The art of The Autumnal #1 is simply delectable. It is full of striking images and moments of suppressed emotional turmoil. When we see Kate taking the fateful phone call, we see a woman surrounded by a mostly empty apartment. There are the alcohol bottles, some trash, a guitar, and a few pieces of furniture with no character to them. She steps into the bathroom and faces a shattered mirror and we see the blood on her fist. She’s trying to convince herself that her life is not broken. It’s a short series of panels that says so much, and this is true throughout the book.

Compared to the bleakness of the city and the nighttime bus ride, colored from a palette full of cool blue tones, Comfort Notch pops out like going outside on a day you should have worn sunglasses. This the kind of autumn that is so pretty it’s almost over the top. The very air has a golden sheen to it, but there’s something about it that also feels superficial. As they walk through town, I like the effect that Kat and Sybil are set apart by being in shadow, as though they’ve brought the colors of the city with them, and in this golden place they look like they don’t belong.

The Autumnal #1 takes a story that looks like a mother and daughter getting a chance to start over. Right away it seems a little off, and soon we are drawn into a place that is brimming with secrets of its own. Intriguing, emotional, and definitely creepy, it is off to a fantastic and stylish start.

Is Kat’s return to Comfort Notch a new beginning or a trigger for traumatic memories?