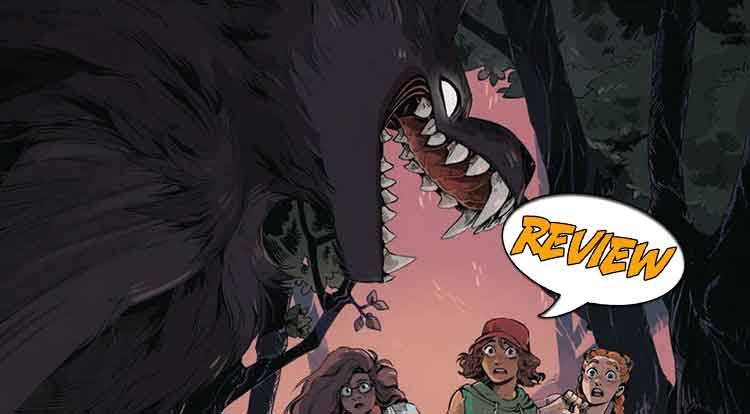 Goosebumps: Secrets of the Swamp #1 Review

Blake is all set for a long, boring summer with her aunt. But what’s with all the talk about there being monsters in the swamp? Find out in Goosebumps: Secrets of the Swamp #1 from IDW Publishing!

GOOSEBUMPS: SECRETS OF THE SWAMP #1

Previously in Goosebumps: twelve-year-old Blake has been sent to stay with her weird aunt for the summer. In a place called Fever Swamp. At least she has the internet and her games. This is a new story arc in the well-known Goosebumps franchise.

JUST A DULL SUMMER IN THE MIDDLE OF NOWHERE

Goosebumps: Secrets of the Swamp #1 opens with Blake playing an online fantasy game (Lore Hunter) with her friend Eden. Blake is third on the leaderboard and has her sights on Lily, who is in the lead. The view pulls back and we see her setup is in the upper floor of a small cabin and she hasn’t unpacked yet.

Her aunt Camila calls her downstairs for breakfast, and it’s a classic interaction. Blake is resigned to her summer; her aunt has plans to show her around and introduce her to possible friends. (Grownups, right?) Then her aunt mentions that one of the other girls in town plays the same game Blake does – a girl named Lily.

The next day, Camila takes her around town showing her the highlights, such as the market and the tea shop, and tells her casually about the monsters in the swamp. Before long she meets Lily and it is brought fully to our attention that Blake has a prosthetic arm. They agree to duel later in their game, and Lily introduces her to Cara and insists that she has to learn about the monsters in the swamp. There are stories about them hunting at night, and people who have disappeared. It turns out Lily wants someone to explore the swamp with her and find out the truth, and Cara won’t do it. Her hope is in the new girl.

Later that night, Blake finds herself packing a bag and sneaking out to meet Lily. Lily says her parents have said there are wolves in the swamp, but she doesn’t believe it. But she also wants to find out if there is anything out there. Like any youthful nighttime exploration, it feels daring and even fun. Until they hear something else moving through the underbrush and hear an eerie howl…

Goosebumps: Secrets of the Swamp #1 does a terrific job depicting the girls. It is not shy about showing us that Blake has a prosthetic arm, but on a first read through, it did not make an impression on me until Lily called attention to it several pages in. Even though it is gold and orange in color, it is so seamlessly part of Blake that, when she is alone it fits in. When she is around others, it’s interesting the way it is not part of the foreground, as though she is hiding it from view.

I appreciate that two of the young ladies, Blake and Cara, are not white. Fever Swamp may represent any little remote tourist town in the country, but I really like that it is diverse and we have heroines that many readers can make connections with. They’re all cute and expressive, and the eye-rolling is second to none. They live here and aren’t at summer camp, but the nighttime exploration feels like kids sneaking out at camp.

Goosebumps: Secrets of the Swamp #1 is part of a franchise where, let’s face it, we kind of know what to expect in the big picture. But where they stand out is in the individual execution, in the choices of characters, and in balancing horror tropes with a younger audience in mind. This one is off to a solid start.

Goosebumps: Secrets of the Swamp #1

Gamers and rivals Blake and Lily meet and decide to explore the swamp looking for real monsters.