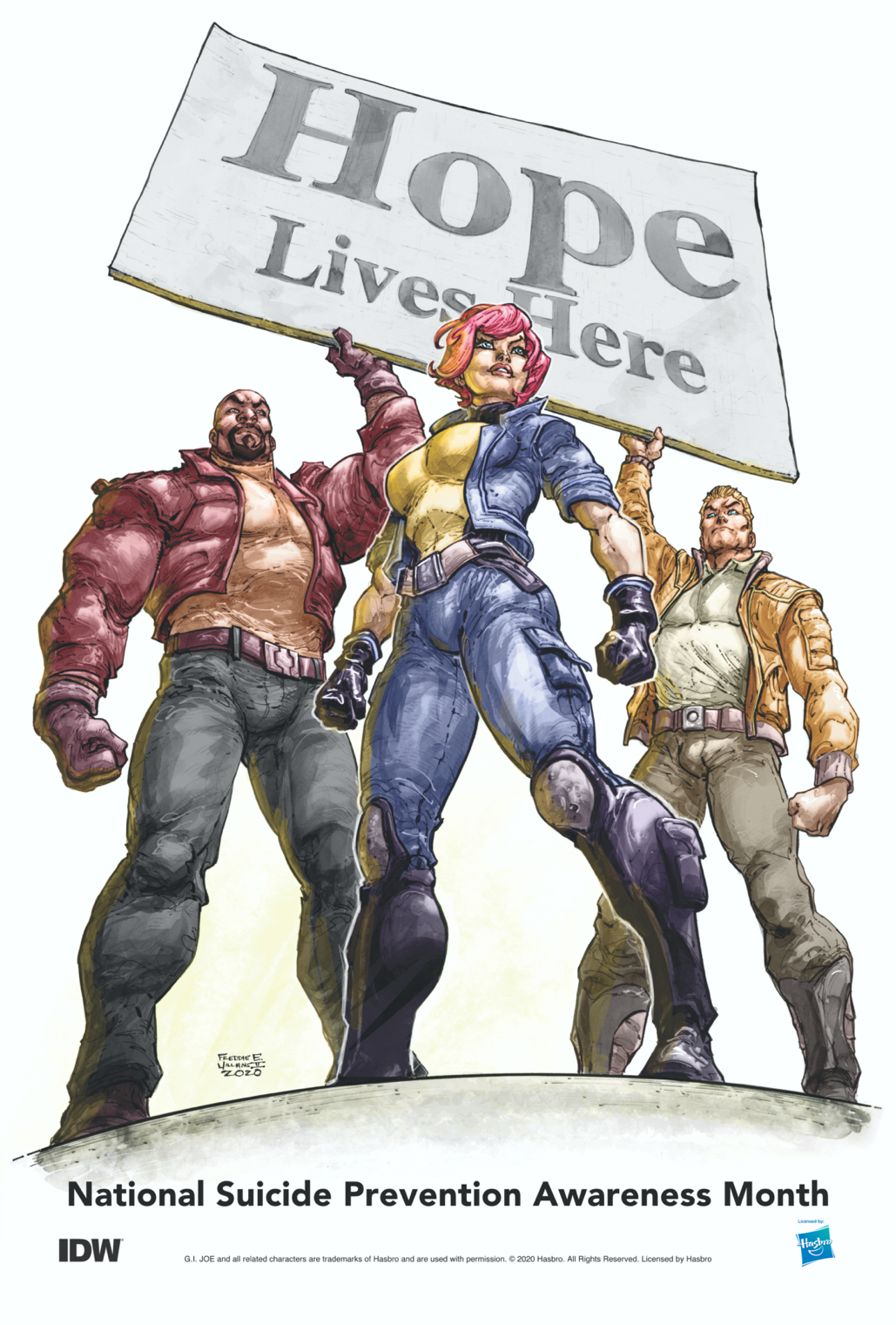 To bring attention to the serious issues facing the heroes who have served our country, IDW and Hasbro have teamed up during September’s National Suicide Prevention Awareness Month with promotions timed to coincide with The Governor’s Challenge to Prevent Suicide Among Service Members, Veterans, and their Families, sponsored by the Substance Abuse and Mental Health Services Administration (SAMHSA). At the center of IDW and Hasbro’s combined efforts is the G.I. JOE comic book series, based on the iconic military toy brand. The recent seventh issue in the series, entitled “A Soldier’s Heart”, focuses on Shana “Scarlett” O’Hara, a combat veteran struggling with the return to civilian life, who joins a support group and navigates both everyday challenges and tragic losses on a path toward recovery. The G.I. JOE creative team consulted with proud service members and the U.S. Department of Veterans Affairs to craft the story and provided valuable real-world information on mental health and resources for support in the issue for the benefit of readers who might require it.

During the month of September, IDW and Hasbro have made G.I. JOE #7 available to read for free online, in an effort to spread awareness of suicide prevention and mental health. IDW also commissioned original artwork from fan-favorite artist Freddie Williams II as a public service announcement, featuring G.I. JOE characters and a banner proclaiming “Hope Lives Here”, a message of encouragement ubiquitous with suicide prevention initiatives. Furthermore, IDW and Hasbro have hosted a virtual panel to raise awareness. Moderated by George Gustines of The New York Times, the panel brings comic book creators, licensors and publishers, combat veterans, and experts on mental health issues together to discuss this important topic. Participants include: “G.I. JOE is one of the great pop culture icons of the past century, and I think everyone involved recognizes how powerful this brand can be when used to shine a light on mental health among our veteran population,” says writer Paul Allor. “I hope this panel and making the issue available for free during the month of September helps spread that message even further.”

In 1982, Hasbro debuted G.I. JOE: A Real American Hero, a reimagining of their classic toy line with a premise that pitted a special mission force, “G.I. JOE”, against a ruthless criminal organization, “Cobra”. One of the most successful toy lines in history, A Real American Hero has transformed over the decades into a valuable multimedia intellectual property, adapted and merchandised as feature films, video games, comic books, animated series, etc.

Since 2010, IDW Publishing has produced licensed G.I. JOE comic books showcasing the fan-favorite characters of A Real American Hero. Their latest interpretation of the series, entitled simply G.I. JOE, launched in 2019 and follows an insurgency of military operatives and civilian recruits struggling to resist a victorious Cobra takeover. The series, written by Paul Allor and illustrated by Chris Evenhuis, Niko Walter, and Emma Vieceli, is distinguished by moving, character-driven tales that explore (and sometimes challenge) concepts of patriotism, duty and sacrifice, courage and personal responsibility, loss, and trauma.