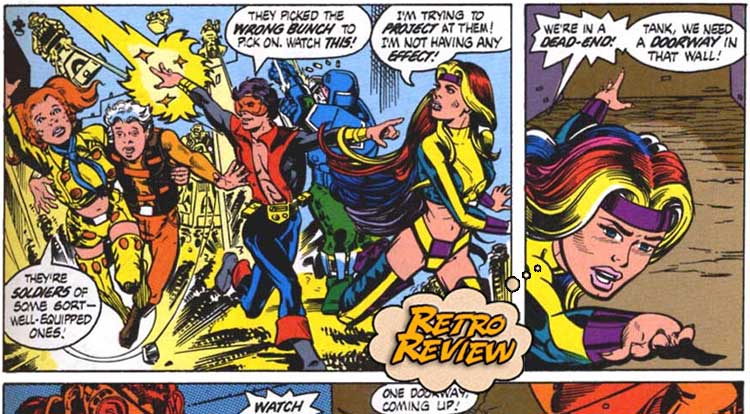 Science made them.  No man can own them.  But what exactly are… The DNAgents?  Your Major Spoilers (Retro) Review of DNAgents #1 awaits! Previously in DNAgents: Founded in 1977, Eclipse Comics is notable for publishing one of the earliest graphics novels and successfully utilizing the new Direct Market for comics.  The company also provided creator ownership and championed creator’s rights nearly a decade before the foundation of Image Comics, with a number of historically important books, picking up both ‘Miracleman’ and ‘The Rocketeer’ from other publishers, publishing Scott McCloud’s wonderful science fiction opus, ‘Zot!’ and one of my personal favorites, ‘The Liberty Project’ by Kurt Busiek.

But before most of that, there was DNAgents! This issue opens from the perspective of the empathic Rainbow, who has spent her entire life floating in a tubeful of liquid, with her powers allowing her to hear the minds of not only her fellow DNAgents, but all the technicians around her.  She sees a vision of five young people in specialized costumes, taking in the training she and her friends are fed, until a crisis arrives that forces them into the spotlight. The owner of the company that made them, billionaire Lucius Krell, has had his daughter kidnapped, but rather than put her fate in the hands of the authorities, he has chosen to activate his own personal commando force, consisting of the headstrong Surge,, energy-manipulator Amber, the super-strong Tank, Rainbow herself and Sham, the shapeshifter whose physical development has lagged behind the others somewhat.  Meugniot’s art is always a treat for me, but I have to admit, Al Gordon’s inks aren’t doing him any favors in this issue, muddying the lines of the characters’ debut in ways that don’t measure up to later issues in the series.  Fully armed and armored, the DNAgents are sent into the field to find and retrieve the stolen Angela Krell. Things quickly go off the rails, thanks to Surge’s aggressive response, but Tank is puzzled to find that their enemies seem to be toying with them rather than trying to actually destroy their resistance.  Worse still, Sham finds himself in a panic, barely able to keep up with his teammates. When they report back in, Lucius believes that the kidnappers are actually rogue agents of his own company, or at least people who stole the data on the DNAgents and several of his other advances.   The team manages to find the kidnappers, and once again Surge insists on blasting in at full speed, leaving Rainbow to actually do the work of taking out their enemies using their training. With their first mission a success, the team returns to Matrix to find that they’ve passed the last test, and are rewarded by enrollment in a local university, giving them the chance to finally experience the real world.  It’s also revealed that Krell actually arranged the kidnapping himself, in the hopes of finally getting his creations out into the world.  All in all, DNAgents #1 is a good first issue, but one that suffers a little bit from the era that it debuted in, with a very 70s Marvel debut for the heroes and an immediate action sequence, but Evanier’s plotting and characterization are very good and Meugniot’s art is always worth the price of admission, earning 3.5 out of 5 stars overall.  If you’ve never heard of this book, I recommend you check out the trade paperback from a few years ago, or haunt some back issues bins…  It’ll be worth your time.

The inker is a mismatch, and it's pretty frenetic, but it makes for a very strong debut issue and one that makes me sad that I wasn't quite reading comics yet.