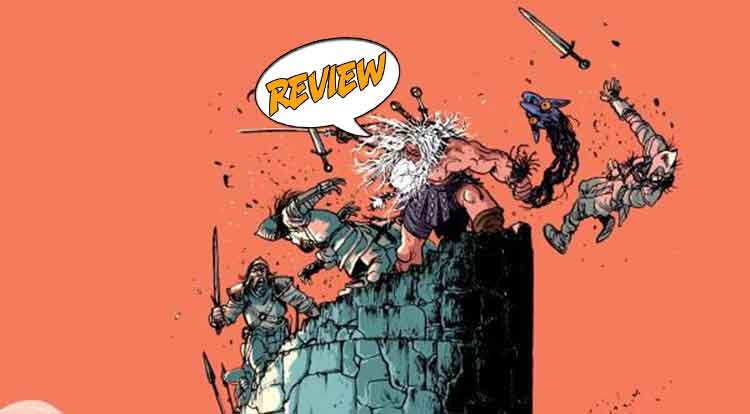 In HEAD LOPPER #13, Norgal the Head Lopper and his fellow travellers seek to guard the head of Agatha the Witch, but darkness follows them.  They hit on an idea to search for Mulgrid, who records all truths, to find out who really is following them.  Mayhem, as they say, ensues… Previously in HEAD LOPPER: The evil forces of Archcleric Florentine were driven from Venoriah, freeing that fair city of his foul rule.  But the quest is ever ongoing, as Norgal the Head Lopper leads a team of four to keep the head of  Agatha safe, with the forces of darkness hot on their heels…

HEAD LOPPER #13 is everything fans of fantasy love to see.  Larger than life characters adventuring across a strange and magic filled realm, full of outlandish creatures and even more outlandish beings of evil.  Writer and artist Andrew MacLean has crafted his own unique take on the fantasy genre, and it is an absolute blast!

A lot of written fantasy today tries to be literate, to get into the heart of the main characters, to give them recognisably human traits, fill them with flaws, but also a yearning to do better.  HEAD LOPPER #13 doesn’t really worry about postmodern nonsense like that.  For sure, the characters are flawed, especially our old pal the Head Lopper.  But that’s been a feature of fantasy since all the way back to Conan, if not before.  Instead, MacLean has stripped away all that stuff and just given us pure adventure.  Fantasy doesn’t have to be filled with angst and worry.  It can simply be fun and adventurous, a distraction from the more pressing concerns of real life.  Why read about a morose gang of adventurers questioning their every move, when you can settle into HEAD LOPPER #13 and just experience the fun.

MacLean’s art is a marvel.  Not a straight line to be seen, it feels organic and real.  His creations are unique, from the muscle bound Norgal, to Agatha, the sass-talking witches’s head.  The monsters are vast, as we see in the opening pages as Norgal, seeking a key, takes on a Cthulhu-esque monster, all tentacles and sticky bits, and defeats it in a unique and pleasingly gory manner.  Not to be forgotten, Jordie Bellaire’s use of color in HEAD LOPPER #13 is nothing short of stunning.  There’s a red-washed scene used to tell in flashback what Norgal’s previous job was, and it is harsh enough to scorch retinas from ten yards away.

HEAD LOPPER #13 is all of the above, and more.  While it does get bloody and violent, it is quirky and visually interesting.  Agatha’s random comments are often amusing, such as when the bodiless head mentions one of her skills is juggling.  Brishka is the more serious of the quartet, a young woman in a hurry, always questioning Norgal but eventually seeing the sense in what he suggests.  The world setting is really interesting – it’s a mish-mash of different cultures, such as when Brishka reveals she’s a mistress of a martial art, at odds with the western-style setting.  The issue opens with quite a nice map, a staple in all fantasy fiction, and a bit of mythology added in during the issue to give the story context.  MacLean is clearly a fan of fantasy fiction, who understands the tropes, and is happy to subvert them as and when the story requires it.

HEAD LOPPER #13 portrays a story, setting and characters that inhabit a fantasy world that feels much looser and less defined than, say, Dungeons and Dragons.  Where D&D feels quite tightly bound around character classes and the setting, HEAD LOPPER #13 is more loosey-goosey, almost as if the story is being created on the next page as we read the one before it.  While there seem to be no rules, and anything goes, that would make the mistake that MacLean is making it up as he goes along.  Quite the contrary – this is a writer and artist at the top of his game, creating a fascinating world and narrative to keep all lovers of fantasy intrigued and entertained.

Fantasy comes in all shapes and sizes, flavors and colors. HEAD LOPPER #13 is another example of the wide spectrum fantasy traverses. A story filled with adventure and excitement, comprising an epic vision and sweep, across a world that is endlessly inventive and fascinating. An essential read for all lovers of fantasy.