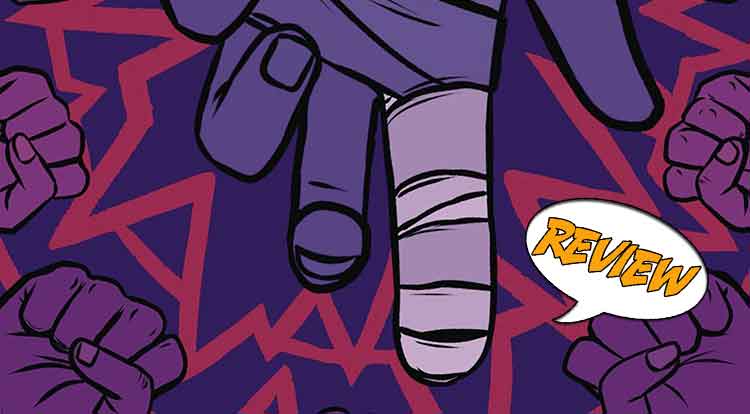 Sadie and Wes realize that their finger guns are no joke. Can Sadie recover from her injuries and what can Wes do to help her? Find out in Finger Guns #5 from Vault Comics! Previously in Finger Guns: Sadie and Wes have discovered their finger guns can briefly change people’s emotions, amplifying their anger, their kindness, or their confidence. Playing with them has been fun, but Sadie’s abusive father is a problem, especially since she suspects he has a plan to kill her mother for her insurance. She comes up with a plan of her own to use the anger gun to get her father taken away. Wes is hesitant, thinking she should go to the authorities. But Sadie’s mother is not yet a full citizen, so this is not an option. Sadie goes ahead without Wes’ help, but her idea backfires. Her father comes home angry, attacks Sadie’s mother, and smashes Sadie’s finger in the door.

YOU CAN’T RUN AWAY FROM YOURSELF

Finger Guns #5 opens at Sadie’s house. Wes is there; the police are there. Child Protective Services will be coming for Sadie, but also to talk to Wes. Mr. County is still there, reassuring Wes that he will be able to see Sadie. It’s a long and lonely day for him, and he gets home and sits in the backyard, alone with his thoughts. His father comes home, the father we’ve barely seen. There’s a wonderful scene where Wes opens up to him, and his father talks to him, opening up a little about his own feelings about the loss of Wes’ mom. It’s a wonderful depiction of them taking the first steps in making a connection.

Wes’ father takes him to the hospital to see Sadie. She’s recovering; she’s had surgery to reattach her finger and they’re optimistic that she will regain function in it. The question remains for all of us, as it must for her, of whether she will regain her magic finger gun abilities. Then there’s an interruption for Child Protective Services to talk to Sadie, and finally Wes gets to see her alone and apologizes for not being there for her. She has now realized that not only was her plan stupid, but she knew it was problematic. And still she went ahead with it. She is worried now about her own inability to control herself, with the unspoken fear being, “What if she’s like her dad?”

She has good news too. She tells Wes that CPS is going to be helping her and her mom. Wes decides to stay with her and falls asleep in her room. Sadie has other plans. She slips her monitor onto him, gets her coat, and leaves her room. She goes to see her mother, and unintentionally affects her mother – badly – with a finger gun. And she realizes that she has seen this power in her father.

Sadie’s nurse, James, comes in to find her gone. Wes finds she has left a note for him. She has also taken his bus pass. She feels that she hurts everyone around her, everyone she loves. And to avoid that, the only thing she can do is leave. Wes finds her at the bus stop where she voices her fears and insists that she must leave. He gives her space and lets her go but doesn’t let her go without a note from him.

It’s a powerful story and well worth the read. Unintended consequences and misunderstood powers can be frightening, and it can be difficult to tell what the right decision is in the spur of the moment.

THE CALM AFTER THE STORM

The art of Finger Guns #5 communicates so much of the story. The opening sequence does this very effectively. Everything happened to Sadie last week, but it touches on Wes, and in several panels we see in the silence how numb he is; how distant and unreal everything seems. When his father comes out to talk to him, his first reaction is to deny that anything is wrong, and to not talk. This is completely expected. But in one simple panel he makes up his mind and admits that he isn’t fine, and the connection he makes with his father is warm.

Sadie has had a lot on her mind. We’ve learned how much she has had to deal with, how much she has been keeping in already. Wes talks to her and she seems to open up to him, and perhaps she does, just a little. But we can also see that she is still hiding things from him, from everyone. She may feel that she cannot control her powers, but she can already control how much of her emotions she reveals. She’s very strong, but also rather tragic.

Finger Guns #5 takes a captivating concept and grounds it so firmly in reality in a way that makes it feel real and as though it has serious consequences. The characters have amazing story arcs. The ending is bittersweet and just a bit hopeful. It’s a very satisfying read.

Sadie tries to get away from her father – but what if her powers came from him?