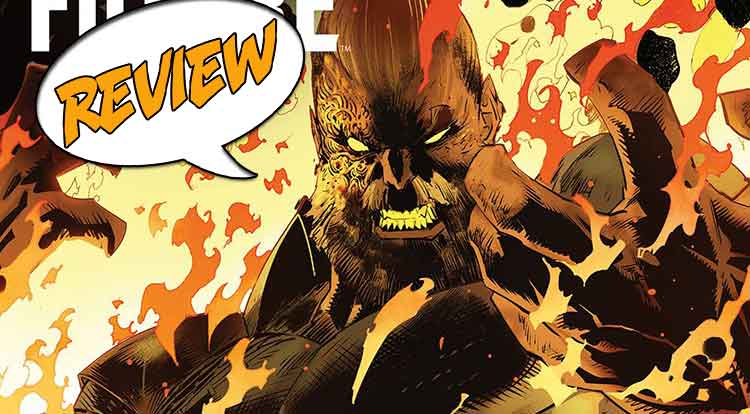 Once and Future #11 Review

Beowulf is dead, so who is going to tear off Grendel’s arm this time? Can Bridgette and Duncan make it happen? Find out in Once & Future #11 from BOOM! Studios.

Previously in Once & Future: For a change, the action comes to Bridgette at her Home. As she settles into something akin to normalcy, Rose forecasts something major in her area. Duncan can’t reach her by phone; his car was destroyed; his Uber bails on him, so he hijacks a cab. Bridgette senses something mystic in the area and urges the other residents to bar the door. The monster bursts in and the elderly Bridgette does her best to fend off Grendel, for that’s who this is. She asks Trevor, who is an expert in Beowulf, how Grendel got killed in the original story. Beowulf killed him by ripping his arm off – but she has already killed Beowulf, so what now?

NOT JUST AN OLD ENGLISH MONSTER

As Once & Future #11 opens, we check in with Arthur and Merlin and the bleeding, screaming Galahad. Arthur is getting impatient and is not happy that the fighting monsters are not his.

We cut to the tiny Bridgette looking at the enormous Grendel and wondering how she is going to rip his arm off. She tells the other residents to run once she’s made her move and starts yelling at Grendel. She scolds him like a mother, and if you know the story of Beowulf, this is a nice tie-in and possibly some foreshadowing. She draws his attention and stabs him in the roof of the mouth and runs.

This is about the time Duncan shows up, ordering the cab to speed up, running into Grendel. This hurts the cab much more than it hurts the monster, and unfortunately the guns are in the cab. Duncan distracts Grendel as the resourceful Bridgette runs to the shed and finds a chainsaw. There is a good bit of blood spatter in this issue, but this works to take off Grendel’s arm.

Bridgette lets everyone know it’s safe, which is delightfully absurd as she is absolutely covered in blood. She wants everyone to keep this quiet and not let on that there was a monster – their knowledge can affect their safety. Of course this is when the police, called previously by Duncan, arrive. As they get set to arrest Bridgette and Duncan, she reminds them of a callsign that told them to stay clear. They do get word from a higher up that confirms they need to let the two go.

But back to the residents, as Bridgette tries to explain to Duncan that it is their duty to know about the monsters and to keep the stories from other people to keep them safe. She tries to pass off the monster as a bear and it almost works, but for Trevor. Trevor knows the story of Beowulf. He knows who shows up next.

Once & Future #11 continues with the terrific color schemes of the Otherworld and when mysticism and magic are in play. This gives the book distinctive flavor and a style that would be pretty except for the fact that gallons of blood are shed. Grendel is huge and toothy. He has been eating people, so he is surrounded by corpses. I love them when Bridgette stabs him in the mouth, our vantage point is from inside the mouth looking out. That’s a great touch.

Having to play to the stories does not make the battles any easier. We get a clear sense of Bridgetting thinking hard about how she can possibly tear Grendel’s arm off. The panel when she revs up the chainsaw is cinematic. Tough she may be, but she is still not some muscular hero; even at her most murderous, she is still a small old lady. This comes out in brilliant dark humor as the police arrive when she is standing there, drenched in blood, and holding a chainsaw. And, in a funny way, it speaks to her privilege as a little old lady as they let her talk even as they take down Duncan.

Once & Future #11 is entertaining, if that can be said for a book with a solid helping of blood and gore. The literary connections are wonderful, and there is still some sly humor in Bridgette and Duncan.